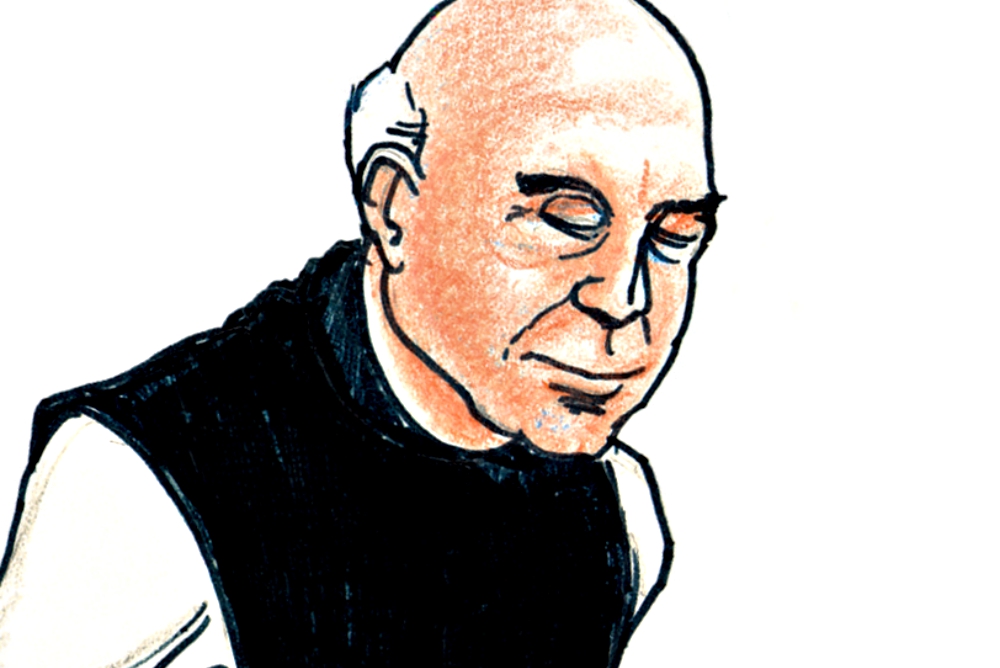 Thomas Merton's "message seems to endure and to be as prophetic today, if not more so, than when he wrote it." (NCR illustration/Pat Marrin)

Last month, just days before the midterm elections, CNN anchor Chris Cuomo ended an episode of his nightly show — which had focused on recent demonization of immigrants — with a lengthy quote on totalitarianism from Trappist monk and spiritual writer Thomas Merton.

Although the cited passage from the 1960 book Disputed Questions was about Europe in World War II, Cuomo said Merton's words are "exactly about what is going on here right now — frighteningly exact."

Cuomo is not the only one touting Merton's contemporary relevance. Despite lukewarm enthusiasm by some church leaders, Merton's writings on interfaith relations, racism, social justice and contemplation continue to inspire Catholics 50 years after his death.

"His message seems to endure and to be as prophetic today, if not more so, than when he wrote it," said Paul Pearson, director of the Thomas Merton Center, an archive of Merton's papers, a museum and a research center at Bellarmine University in Louisville, Kentucky.

On spirituality, social justice and interfaith dialogue, "everything Merton says is still relevant today," Pearson noted, adding that if he were still alive, Merton would probably be writing on "fundamentally the same issues."

Monday marks the 50th anniversary of Merton's tragic accidental death — he was electrocuted by an electric fan near Bangkok, where he was attending an interreligious monastic conference. The anniversary is being marked by events around the world, from Russia to Argentina, from Cleveland to Gethsemani Abbey in Kentucky, where Merton lived and was buried.

Pearson is one of a dozen Merton scholars — many of whom were not yet born when Merton died — who will present at a conference at Catholic Theological Union in Chicago this weekend. 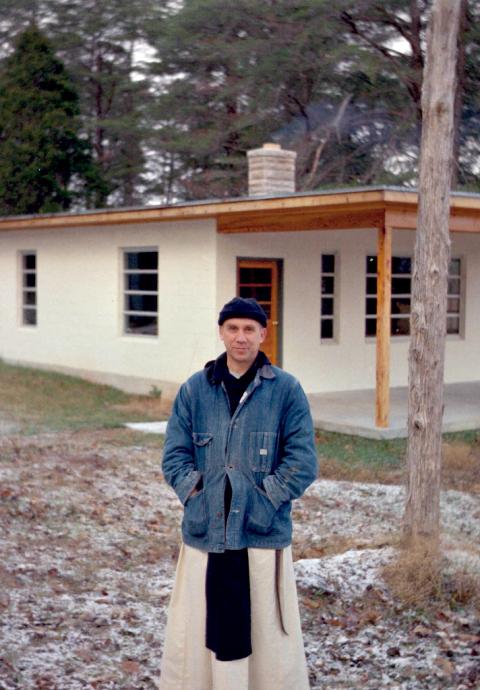 Trappist Fr. Thomas Merton in an updated photo at the hermitage at Gethsemani Abbey (CNS/Merton Legacy Trust and the Thomas Merton Center at Bellarmine University)

Titled "Disappear From View?: Thomas Merton Fifty Years Later, and Beyond," the gathering kicks off Friday evening with a keynote by Franciscan Fr. Richard Rohr — whom some see as a spiritual successor to Merton — and continues with a daylong schedule of talks, panels and Mass on Saturday. (The keynote's registrations are full.)

The conference is co-sponsored by Catholic Theological Union's Bernardin Center, Loyola University Chicago's Hank Center for the Catholic Intellectual Heritage, and the Chicago Chapter of the International Thomas Merton Society.

Pearson sees interest in Merton "growing rather than declining," not only in the United States, but around the world, with more dissertations on his work coming from Eastern Europe and Asia, and an increasing number of courses being taught about him.

At Bellarmine, a class on Merton is offered every semester and usually has a waiting list, even though many young Catholics don't know Merton or his work. Students love learning about contemplation, prayer and silence, but Merton is often their first exposure to Catholicism as something other than dogmas and moral laws, said Gregory Hillis, associate professor of theology, who teaches the course.

"There's a craving for a deeper spiritual life that comes from a deep sense of anxiety that people have," said Hillis, noting that "most of these students have never lived in a situation when we haven't been at war."

Like many of a previous generation, Hillis read Merton's best-selling 1948 autobiography, The Seven Storey Mountain, when he was young, and it profoundly influenced his life. He applied for the job at Bellarmine, in part, to study Merton and is writing a book on Merton's Catholicism. In a fit of "youthful exuberance," he even got a tattoo of a drawing by Merton.

Journalist and spiritual writer Judith Valente also read Merton's autobiography while in college and was initially hooked by his masterful writing of poetry and prose. "This was a guy who could make preparing a bowl of oatmeal sound like the most fascinating event in the world," she told NCR in an email interview.

She re-read The Seven Storey Mountain in her 30s, when she needed to hear his message to slow down, be more aware of the suffering of others, and "look inside myself to find that spark that makes me who I am."

Merton's famous prayer, which begins, "My Lord God, I have no idea where I am going ...", first introduced Michael Brennan to Merton in the 1970s, when he was facing possible draft into the Vietnam War.

Now the coordinator of the Chicago Chapter of the International Thomas Merton Society, Brennan sees the spiritual writer as a "contemporary hero" who speaks to today's social and church issues.

"He has a great deal to say in this day and age, particularly on compassion, peace and justice, and empathy," Brennan said. "I think he's as relevant today as he was in his day."

Brennan calls Merton "a spiritual director from afar," with a "common-sense approach to life." He heeds Merton's call for contemplation by taking time for silence at the chapel at O'Hare Airport, where he works as a baggage handler.

But it is Merton's writing on justice — and particularly on race — that many say needs to be most heeded today. Early on, Merton saw racism as a problem of white privilege and a structural sin.

Author and filmmaker Cassidy Hall believes Merton's work is eerily relevant. "It's a constant reminder of the work still unfolding for peace, social justice, equality, human rights, and more," she said in an email to NCR.

After reading Merton for the first time seven years ago, Hall was inspired to make a pilgrimage to all 17 Cistercian/Trappist monasteries in the U.S., which resulted in the documentary film "In Pursuit of Silence." She is now working on a short documentary on Merton's final years in the hermitage.

A teaser trailer for "Day of a Stranger," Cassidy Hall's documentary on Thomas Merton, features recordings of Merton's voice.

Hall praises Merton's honesty and his ability to wrestle with paradoxes, which she believes speaks to a contemporary culture mired in fear.

But Merton's openness to interreligious dialogue made some Catholics nervous — then and now. In 2005, when the U.S. bishops were creating a catechism for young adults, in which each chapter begins with a profile of an exemplary Catholic, Merton was originally included but removed.

"The generation we were speaking to had no idea who he was," then-Pittsburgh Bishop Donald Wuerl, chair of the editorial oversight board, said at the time. But he also alluded to concerns that Merton's studies of Eastern religions implied a lack of commitment to Catholicism. 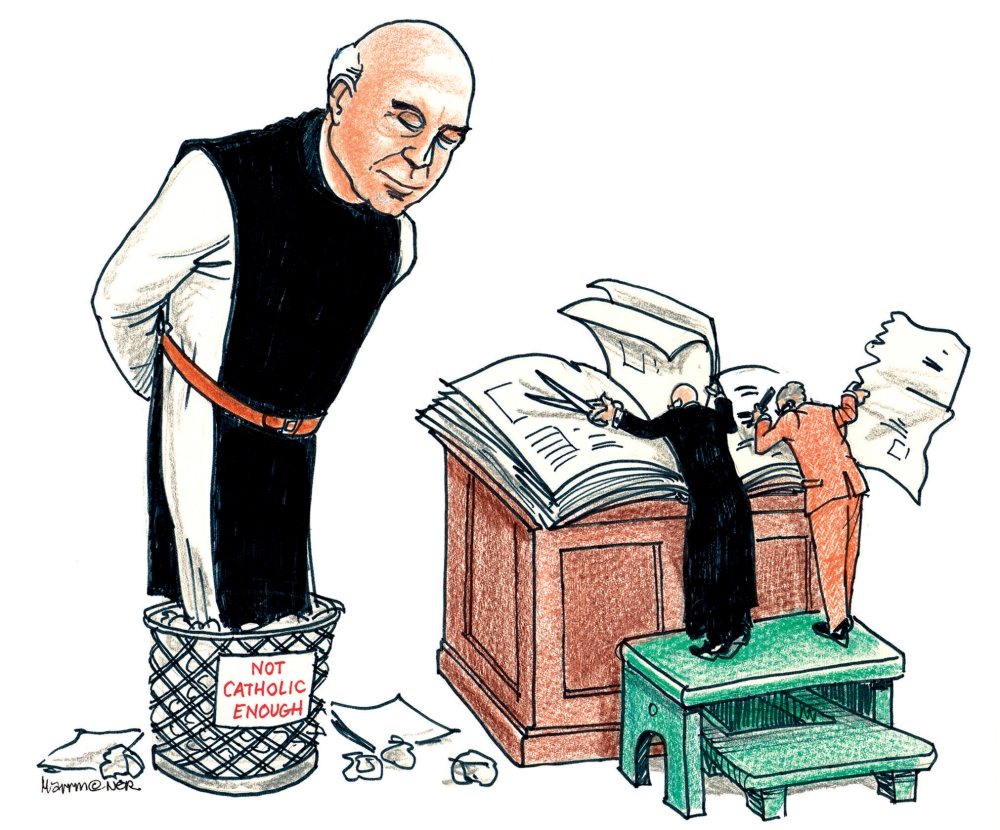 A cartoon from National Catholic Reporter's issue of March 11, 2005, illustrates the controversy over Thomas Merton's removal from a Catholic catechism for young adults. (NCR illustration/Pat Marrin)

Nothing could be further from the truth, say Merton scholars. And Pope Francis must agree, having chosen Merton as one of four Americans he highlighted in his speech to Congress in 2015.

Merton "remains a source of spiritual inspiration and a guide for many people," the pope said. "Merton was above all a man of prayer, a thinker who challenged the certitudes of his time and opened new horizons for souls and for the church. He was also a man of dialogue, a promoter of peace between peoples and religions."

Chicago conference organizer Steven Millies said Merton was a "restless believer" who can speak to today's "nones" and others who struggle with institutional religion.

"He struggled with the tradition as much as he wanted to live inside it," said Millies, director of the Bernardin Center.

"I think it's helpful to go back to someone who was a thoughtful, believing, questioning, critical commentator and observer of the social condition, who was trying to find a way to connect with the world outside the church," he said.

At Loyola, students respond to Merton's connection of contemplation and social action, and to his openness to religious dialogue that doesn't devalue another theological tradition, said Michael Murphy, director of the Hank Center.

Merton can be a role model at a time of deep polarization, he said. "Even though it's been 50 years since he died, I think we're finally getting him."

Read this next: Memories of Merton's path linger at St. Bonaventure University