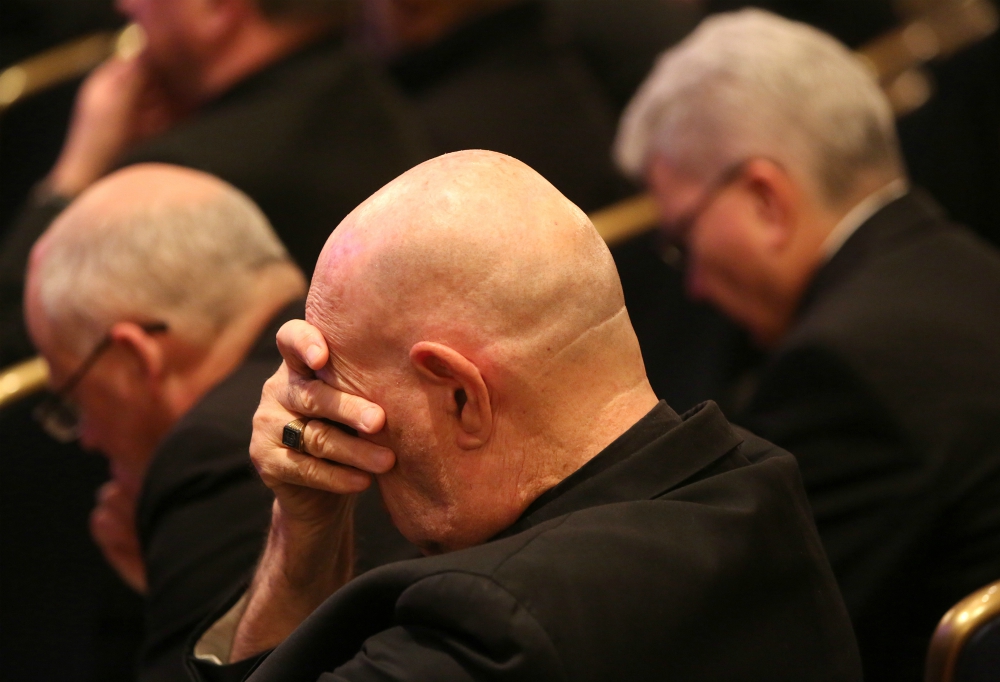 Bishops pray before the Blessed Sacrament in the chapel during a day of prayer Nov. 12, 2018, before hearing from abuse survivors at their fall general assembly in Baltimore. The clergy sexual abuse crisis continued to command attention and action from the U.S. bishops throughout 2019. (CNS/Bob Roller)

The clergy sexual abuse crisis continued to command a large amount of attention and action from the U.S. bishops throughout 2019.

The year was headlined by actions during the bishops' spring general assembly, during which they approved a plan to implement Pope Francis' motu proprio on addressing abuse.

The pope issued his document, Vos Estis Lux Mundi ("You are the light of the world"), in May to help the Catholic Church safeguard its members from abuse and hold its leaders accountable.

The motu proprio was one of the measures that came out of a February Vatican summit on clergy sexual abuse attended by the presidents of the world's bishops' conferences.

Vos Estis Lux Mundi established procedures for reporting allegations of sexual abuse of minors or of vulnerable person by clerics, including bishops, or members of religious orders. The document also holds church leaders accountable for actions or omissions relating to the handling of abuse reports.

In line with the plan, the bishops in June approved a third-party reporting system to field sexual misconduct allegations against bishops. Such a system could be in place by the end of February, Anthony Picarello, associate general secretary of the U.S. Conference of Catholic Bishops, reported during the bishops' fall general assembly in November.

The company awarded the contract to implement the system, Denver-based Convercent, was working quickly to get it in place well before the May 31, 2020, deadline set by Francis, Picarello said.

The precise date a toll-free hotline will be activated and links on diocesan and eparchial websites and the conference's website will go live will depend on how quickly each diocese or eparchy can implement the program, he said.

In another action in June, the bishops approved the document "Affirming Our Episcopal Commitments" and promised to hold themselves accountable to the commitments of their Charter for the Protection of Children and Young People, including a zero-tolerance policy for abuse. The document said any codes of conduct in their respective dioceses regarding clergy apply to bishops as well.

In addition, the bishops approved a "protocol regarding available nonpenal restrictions on bishops," which outlines what canonical options are available to bishops when a retired bishop resigns or is removed "due to sexual misconduct with adults or grave negligence of office, or where subsequent to his resignation he was found to have so acted or failed to act."

Bransfield left his position in September 2018 under a cloud of allegations of sexual and financial misconduct. Francis accepted Bransfield's resignation Sept. 13, 2018.

After consulting with Vatican officials Bishop Mark Brennan of Wheeling-Charleston Nov. 26 announced that he asked his predecessor to pay back more than $792,000 to cover the "inappropriate expenditure of diocesan funds to support a luxurious lifestyle."

Brennan outlined a series of other actions in a nine-point "plan of amends" he proposed that the retired bishop take, including issuing apologies to the people he is alleged to have sexually abused, to the faithful of the diocese for "the grievous harm he caused," and to diocesan employees "who suffered from a culture of intimidation and retribution which the former bishop created."

Elsewhere, the bishop of Buffalo, New York, retired because of questions surrounding his handling of clergy sexual abuse reports.

Bishop Richard Malone, 73, told Catholics Dec. 4 he asked the pope to allow him to retire early so the people of the diocese "will be better served" by a new bishop who is "perhaps better able" to bring about "reconciliation, healing and renewal" in addressing the abuse crisis.

Malone is two years shy of the age at which bishops are required by canon law to send their resignation to the pope.

For more than a year, Malone's response to reports of sexual abuse by clergy has been under fire, particularly a situation involving two priests' relationship with a seminarian that he has called "a very complex, convoluted matter."

Throughout the year, the situation surrounding former U.S. Cardinal Theodore McCarrick continued to linger over the U.S. church. Cardinal Sean O'Malley of Boston reported to the bishops during their fall general assembly in November that the Vatican may publish what it knows about the ascent to power of now-disgraced former prelate by Christmas, or perhaps the New Year.

McCarrick was dismissed by the Vatican from the clerical state in February following an investigation of accusations that he had abused children early on in his career of more than 60 years as a cleric, and that he also had abused seminarians as a bishop.

O'Malley's brief presentation about his visit with Vatican officials, including Cardinal Pietro Parolin, secretary of state, in early November was short on details. He noted that officials had showed him a "hefty document that has been assembled."

"We made it clear to Cardinal Parolin at the leadership of the Curia that the priests and the people of our country are anxious to receive the Holy See's explanation of this tragic situation, how he could become an archbishop and cardinal, who knew what and when," O'Malley said. "The long wait has resulted in great frustration on the part of bishops and our people and indeed a very harsh and even cynical interpretation of the seeming silence."

A day after a New Jersey victims' rights law went into effect, a 37-year-old man filed a lawsuit against McCarrick, who was Newark's archbishop from 1986 to 2000.

The suit also names the Newark Archdiocese as a defendant and alleges Vatican officials were aware of McCarrick's behavior during his more than 60 years as a cleric and yet continued to promote him as a church leader.

In all, 15 states have enacted rules that extend or suspend the statute of limitations to allow claims to be filed by abuse survivors against dioceses, the Associated Press reported. With the rules in place, dioceses in those states were expecting a surge in new lawsuits that may cost billions of dollars in payouts.

The Diocese of Rochester, New York, sought protection under federal bankruptcy laws in response to that state's new Child Victims Act lifting the statute of limitations. Bishop Salvatore Matano took the step in the wake of nearly 50 lawsuits filed against the diocese in the weeks after the law took effect Aug. 14.

Matano called the filing "a very difficult and painful decision," in a video and letter to parishes released Sept. 12.

"But after assessing all reasonable possibilities to satisfy the claims, reorganization is considered the best and fairest course of action for the victims and for the well-being of the diocese, its parishes, agencies and institutions," he said. "We believe this is the only way we can provide just compensation for all who suffered the egregious sin of sexual abuse while ensuring the continued commitment of the diocese to the mission of Christ."