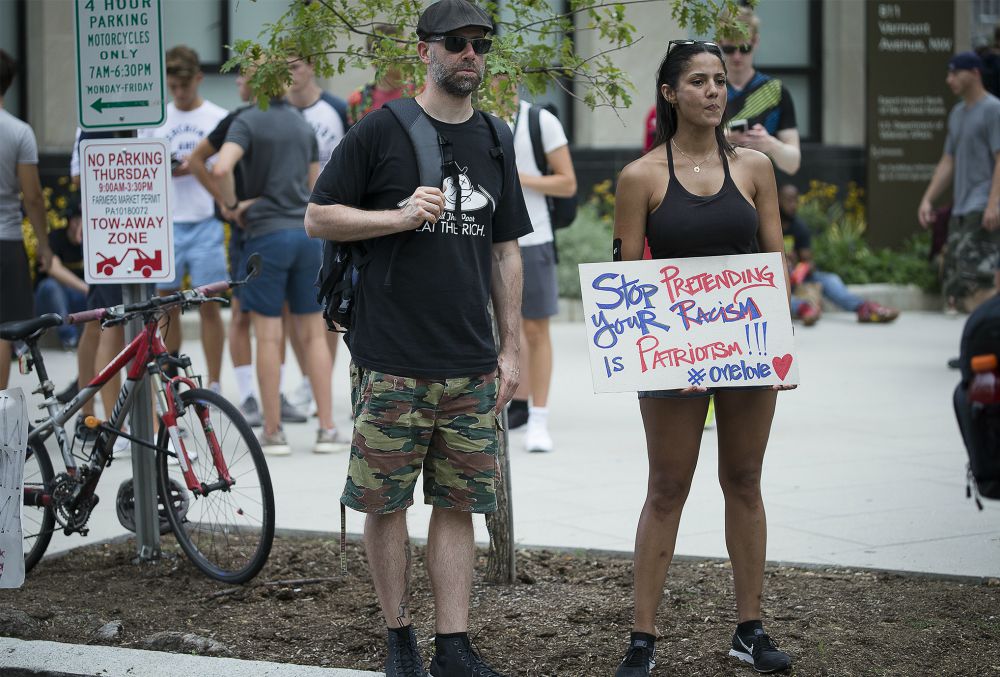 A person holds an anti-racism poster near Lafayette Square in Washington Aug. 12 prior to the start of the white nationalists' rally "Unite the Right 2." (CNS /Tyler Orsburn)

The U.S. bishops' long-awaited pastoral letter against racism is in danger of being overshadowed by discussion of sex abuse at the church leaders' annual meeting in November, but two bishops who worked on the document think it could also help restore some of their credibility.

"We have to address sexual abuse, and that should be our first and primary focus, but I also think [racism] is an important issue as well," said Bishop Shelton Fabre of the Diocese of Houma-Thibodaux, Louisiana. Fabre is chair of the bishops' Subcommittee on African American Affairs and of the Ad Hoc Committee Against Racism.

The proposed racism statement, "Open Wide Our Hearts: The Enduring Call to Love — A Pastoral Letter Against Racism," will be considered for approval during the Nov. 12-14 fall general meeting of the U.S. Conference of Catholic Bishops in Baltimore. Following a full day of spiritual discernment and prayer in response to the sex abuse crisis, the bishops will discuss and vote on proposals for a third-party reporting mechanism, standards of conduct for bishops, and protocols for bishops resigned or removed because of abuse.

Although several other agenda items have been postponed to focus on the sex abuse crisis, the racism letter will be voted on. 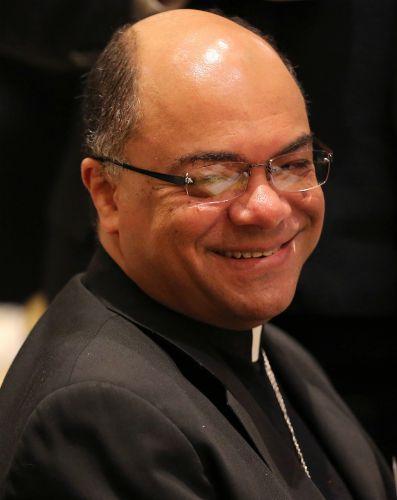 San Antonio Archbishop Gustavo García-Siller, chair of the bishops' Committee on Cultural Diversity in the Church, noted that racism is "another abuse" that victimizes and discards people.

"It affects the core of the human person," García-Siller told NCR. "So we want to be consistent in our ethics ... to protect, promote and defend the dignity of the human person. We are created in the image and likeness of God, and that inherent dignity should be acknowledged and respected."

"We cannot be Christian and be racist," he said.

Such ethical consistency, García-Siller believes, could help restore some of the lost credibility resulting from recent news about sex abuse and cover-up in the church.

Fabre, also a member of the cultural diversity committee, agreed the bishops' credibility "might be strengthened if we speak out and not shy away from this issue [of racism]," he said.

The letter has been worked on for nearly three years by the cultural diversity committee. Last fall, in the wake of the violence that erupted at white nationalist protests in Charlottesville, Virginia, the bishops created the ad hoc committee, which will implement the pastoral letter. Fabre took over the ad hoc committee after its first chair, Bishop George Murry, resigned to pursue treatment for leukemia.

U.S. bishops' conference president Cardinal Daniel DiNardo told Catholic News Service that it will include multiple items for dealing with the abuse crisis, such as the issue of bishops' behavior and accountability, including a possible "code of conduct for bishops" similar to those that most dioceses have for priests and for lay employees, as well as a "third-party reporting system," that would allow someone with an abuse complaint against a bishop to report him to someone not connected with his diocese or the bishops' conference.

DiNardo and other members of the bishops' Administrative Committee also have instructed the Committee on Canonical Affairs and Church Governance to develop proposals for policies addressing restrictions on bishops who were removed or resigned because of allegations of abuse of minors or adults.

The Administrative Committee consists of the officers, chairmen and regional representatives of the U.S. bishops' conference and is the highest authority of the national conference, outside of the full body of bishops when they meet for their fall and spring general assemblies.

In an interview with NCR, Chicago Cardinal Blase Cupich said the bishops must renounce some of the supreme authority they have over their dioceses to allow for the creation of a new national body to investigate misconduct allegations.

"Every bishop has to be willing to say, 'I will allow myself to be investigated by an independent group if there is an accusation against me,' " said Cupich, who is not part of the Administrative Committee.

Also on the November meeting agenda are a report on the Synod of Bishops on Young People, the Faith, and Vocational Discernment and a vote on the 2019 budget.

Related: US bishops are not rushing to Francis-led agenda

There will also be a voice vote on the cause for canonization for Sr. Thea Bowman, Sister of the Third Order of St. Francis of Perpetual Adoration, who worked for justice for African-American Catholics.

Security at the meeting, held at the Marriott Waterfront Hotel in Baltimore, is expected to be stricter than usual to prevent access by protesters.

The racism letter, the first on the topic from the entire bishops' conference in nearly 40 years, clearly calls racism a sin and an "ugly cancer [that] still infects our nation."

"Racism still profoundly affects our culture, and it has no place in the Christian heart. This evil causes great harm to its victims, and it corrupts the souls of those who harbor racist or prejudicial thoughts," the proposed letter says.

It traces the history of racism in the United States, including in the church, focusing in particular on discrimination against African-Americans, Hispanics and Native Americans. The pastoral letter describes as sinful both institutional racism and individual acts of discrimination.

"Although our nation has moved forward in a number of ways against racial discrimination, we have lost ground in others," the letter said. "We are not finished with the work. The evil of racism festers in part because as a nation, there has been very limited formal acknowledgement of the harm done to so many, no moment of atonement, no national process of reconciliation."

"Love compels each of us to face courageously the vice of racism," according to the pastoral letter. "It requires us to reach out generously to the victims of this evil, to assist the conversion needed in those who still harbor racism, and to begin to change policies and structures that allow racism to persist." 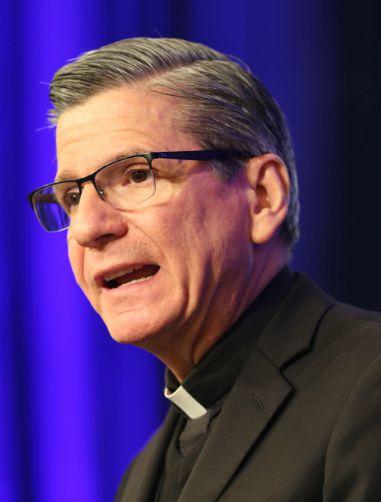 García-Siller said it is important for the bishops to speak out now, as the country has experienced a resurgence in racist comments and actions "that show very clearly the presence of this sin of racism."

Negative attitudes toward immigrants, especially those who are Latino, reveal that the "sin of racism is really very deep in people's heart and minds," he said, adding that conversion must not be only toward God but "in the way we relate to one another."

García-Siller hopes the pastoral letter gives hope to those who are victimized by racism and that the country's multicultural history will be an asset in the fight against racism.

Fabre said the pastoral letter is directed at all Catholics, "all people of goodwill" and portrays racism as a "life issue."

"We hope that those who have been fighting against racism for years and have been dismayed by recent events will be affirmed and find the courage to continue to work for peace and justice and reconciliation," he said.

The pastoral letter is the bishops' third on racism. "Brothers and Sisters to Us: U.S. Bishops' Pastoral Letter on Racism in Our Day" was approved in 1979. In 1968, the bishops approved a statement, "The National Race Crisis."

In 1984, the nation's African-American bishops dealt with racism in their own pastoral letter, "What We Have Seen and Heard, A Pastoral Letter on Evangelization."

Three weeks before the bishops' November meeting, the bishops' conference also announced plans to start 2019 with a spiritual retreat to pray and reflect on issues facing the church, after a delegation of U.S. bishops met with Pope Francis about the abuse crisis in September.

[Heidi Schlumpf is NCR national correspondent. She can be reached at hschlumpf@ncronline.org. Follow her on Twitter @HeidiSchlumpf. Catholic News Service contributed to this report.] 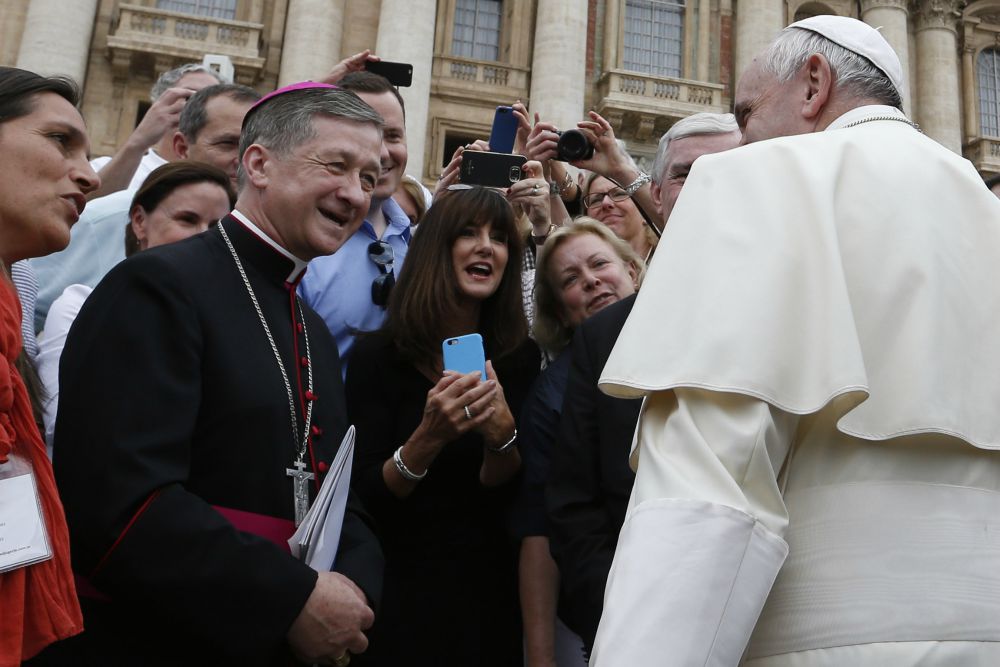 Archbishop Blase Cupich of Chicago smiles as he meets Pope Francis during his general audience in St. Peter's Square at the Vatican Sept. 2, 2015. (CNS/Paul Haring)

A version of this story appeared in the Nov. 2-15, 2018 print issue under the headline: Abuse discussion may overshadow racism letter.