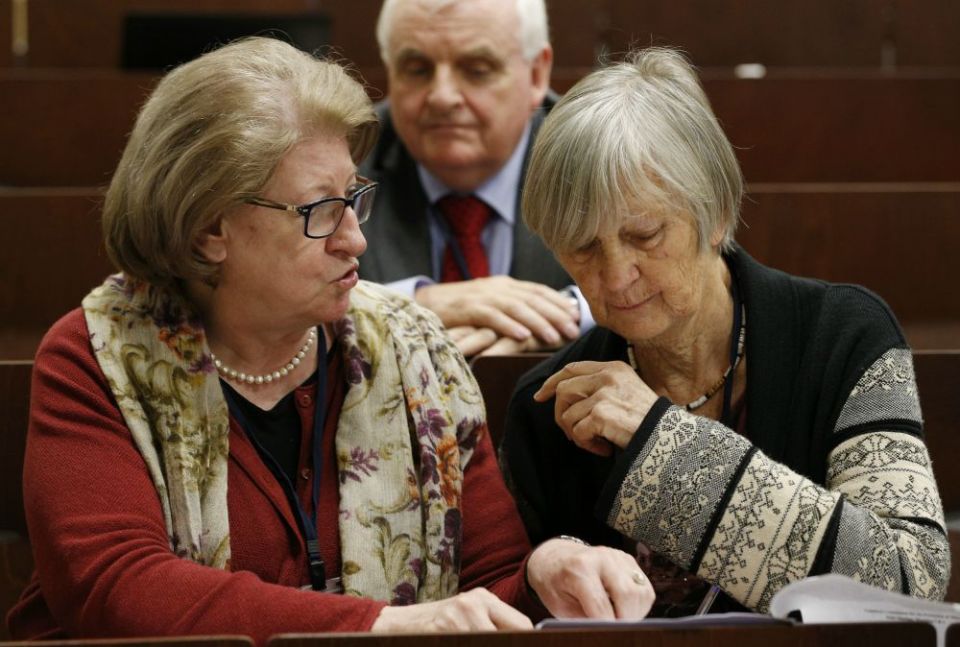 Hanna Suchocka and Dr. Catherine Bonnet talk during a seminar on safeguarding children at the Pontifical Gregorian University in Rome March 23, 2017. Also pictured is Bill Kilgallon. Pope Francis did not reappoint Bonnet, Kilgallon and four other members to the Pontifical Commission for the Protection of Minors in February 2018. (CNS/Paul Haring)

Rome — Pope Francis' clergy sexual abuse commission could be more effective in protecting children if the group were granted more time to work directly with the pope and given resources to hold more in-person meetings each year, a former member has suggested.

French child psychiatrist Catherine Bonnet, who was among a group of six founding members of the Pontifical Commission for the Protection of Minors not reappointed by Francis last month, said the "most important thing" is that the group does not have adequate time to explain its proposals directly to the pontiff.

"We never worked with Pope Francis," Bonnet said in an NCR interview Feb. 19. "We only said hello, two minutes, and good-bye, two minutes."

"The most important thing for the next commission ... would be that there are times where Pope Francis can come and the proposals are explained to him, why they are so important," she said.

Francis renewed the mandate of the abuse commission Feb. 17, reappointing eight of its previous members and adding nine new people to its ranks. The renewal came two months after the remit of the commission had lapsed Dec. 17, when the three-year terms of its founding members had expired.

Francis is not known to have held a working meeting with the abuse commission, which was established at the advice of his advisory Council of Cardinals in December 2013.

In July 2014, the pope celebrated Mass with abuse survivors and spent over three hours in private meetings with them, in an effort organized by Boston Cardinal Sean O'Malley, the head of the commission.

In September 2017, Francis held his first formal meeting with commission members, during which he admitted that the Catholic Church waited too long before taking reports of clergy sexual abuse seriously. While two members addressed the pope at that encounter, there was no discussion on issues their group is trying to tackle.

'I would have tried to convince a new commission'

Bonnet, respected across Europe for her research on perinatal violence, said she wanted to continue serving on the abuse commission.

She offered Francis her resignation from the group in June 2017 after two hopes she had for its work were not achieved, but said the pope did not accept her dismissal, giving her the impression she might stay on.

"I have been working for 35 years on this issue," said Bonnet, who in 2001 was appointed a knight of France's Order of the Legion of Honor. "And I have been used to a lot of obstacles. I would have tried to convince a new commission."

Dominican Fr. Thomas Doyle, an expert on the church's response to clergy sexual abuse said he was "really disappointed" that Bonnet and British Baroness Sheila Hollins, a peer in the U.K. House of Lords and a noted psychiatrist and psychotherapist, were not reappointed.

"I know them and I have a lot of respect for them, a lot of confidence in their capabilities," said Doyle. "They both have really unique experience as professionals and in their personal lives that would help them deal with the issue."

Hollins and several other former and current members declined to be interviewed for this report.

British Sr. Jane Bertelsen, one of the new members of the papal commission, told The Tablet that she saw part of its mission as "continuing the work that has been done to change that deep-seated culture in the church that lacked accountability, transparency and collaboration."

"We have to restore credibility," said Bertelsen, head of the Franciscan Missionaries of the Divine Motherhood.

Bonnet said one of her unmet hopes for the commission was that survivors or advocate groups be invited to a hearing hosted by the group before the group's meeting last September.

She also mentioned that the commission had given Francis a document in that meeting recommending a number of specific proposals. She highlighted three of those proposals:

Asked if she thought the commission's proposals were being taken seriously, Bonnet replied: "I think Pope Francis has our proposal. We will see."

Bonnet also said that the commission's current practice of having two in-person meetings a year, each lasting about a week, "is not enough."

"They really need to spend time to discuss and to work and to study all together," she said. "Two weeks would be better. Three times a year would be the minimum."

She also suggested that the group hold its meetings not only in Rome but also in other parts of the world, "to be in contact directly with the population" and to have sessions with various groups of abuse survivors.

Doyle, who was one of the first priests to publicly bring attention to clergy sexual abuse in the 1980s, was biting when asked about ways the commission could change in order to be more effective at protecting children.

"I think the commission has been, on balance, very ineffective, even as a public relations attempt," said the priest, adding that he thought the "most important event" to occur since the commission's creation was the resignation of Marie Collins.

"We never worked with Pope Francis. We only said hello, two minutes, and good-bye, two minutes."

Collins, an Irish abuse survivor who was a founding member of the group, resigned in March 2017 over frustration with Vatican officials' resistance to implement its recommendations.

"Her resignation and her public statements made quite clear what was really going on over there: that the obstruction of the curia is something that has not been dealt with effectively," said Doyle, referring to the Vatican bureaucracy.

Other experts with wide experience working with the Catholic Church on preventing clergy sexual abuse proposed a number of possible changes.

Marci Hamilton, a noted lawyer and children's rights activist, said the group had been "too unaffiliated" with other organizations around the world working to protect children.

"If the church were serious about stopping child sexual abuse, it would be an ally with prosecutors worldwide," said Hamilton, a professor at the University of Pennsylvania and CEO of the think tank CHILD USA.

"It's been treating the sex abuse crisis as though it is its own internal problem," she said. "The commission has not been focusing on prosecution of perpetrators. They have not been asked to find the best legal solutions to what is a crime." 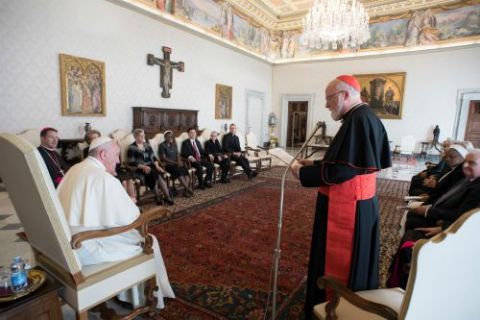 Pope Francis listens as Cardinal Sean O'Malley of Boston, president of the Pontifical Commission for the Protection of Minors, speaks during an audience with commission members at the Vatican Sept. 21, 2017. (CNS /L'Osservatore Romano, handout)

Hamilton suggested that commission members could meet with the FBI to "talk about the sexual abuse crisis with some of the best experts in the world."

"The FBI is one of those institutions that is a leader in fighting child trafficking, child prostitution and child sex abuse," she said. "They need to hear what the FBI knows about how this crime operates."

Kathleen McChesney, former FBI executive assistant director who left the agency in 2002 to lead the U.S. bishops' new child protection office, suggested that the commission members "need to be vigilant" to make sure that its Rome-based staff "has the ability to implement the changes that they believe need to be made."

"There needs to be a good mechanism for getting things accomplished," said McChesney, who also co-chaired the National Advisory Council of the Conference of Major Superiors of Men from 2014-17.

She also said it is not clear what executive authority the commission has, who the group could recommend policy changes to, and who would then have the authority to implement those changes.

"You can say, 'We make these recommendations to the pope,' " said McChesney. "Well, in large organizations you need other authorities that can do that."

"In a perfect world, they would be more a part of the institution than advisory to it, than strategic," she said. "You need something, some mechanism, some organizational authority that can implement these things."

"There is a lot that can be done if the commission is allowed to set the strategy and then is supported with people and other resources," said McChesney. "I'm hopeful about it, but there have to be some changes. There has to be that support. If it's not there, then we're just going to have this same conversation in three years."

Being 'doer of the word' means rejecting hypocrisy, cover-up