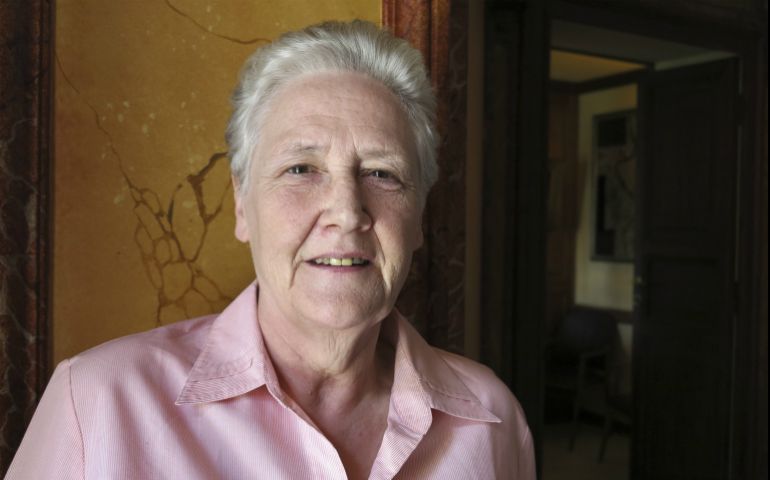 Vatican City — The only active member of Pope Francis' new commission on clergy sexual abuse who is an abuse survivor has resigned from the group due to frustration with Vatican officials' reluctance to cooperate with its work to protect children.

Marie Collins, an Irishwoman who has served on the Pontifical Commission for the Protection of Minors since March 2014, announced her resignation in a press statement Wednesday.

In a separate exclusive statement for NCR explaining her choice, Collins says she decided to leave the commission after losing hope that Vatican officials would cooperate with its work following a failure to implement a series of recommendations.

Collins says her decision to resign was immediately precipitated by one Vatican office's refusal to comply with a request from the commission, approved by the pope, that all letters sent to the Vatican by abuse survivors receive a response.

"I find it impossible to listen to public statements about the deep concern in the church for the care of those whose lives have been blighted by abuse, yet to watch privately as a congregation in the Vatican refuses to even acknowledge their letters!" Collins writes in the statement.

"When I accepted my appointment to the Commission in 2014 I said publicly that if I found what was happening behind closed doors was in conflict with what was being said to the public I would not remain," she states. "This point has come. I feel I have no choice but to resign if I am to retain my integrity."

Collins is the third of Francis' 17 original appointees to the commission to leave its work. The only other abuse survivor on the commission, Englishman Peter Saunders, was placed on leave from the group in February 2016, because of friction between Saunders and other members of the commission.

Claudio Papale, an official at the Vatican's Congregation for the Doctrine of the Faith, resigned from the commission in May 2016. His resignation was not initially made public. Upon inquiry from NCR at the time, a commission spokesperson said Papale had resigned for personal reasons.

In a statement Wednesday, the commission said it had “deep appreciation” for Collins’ work. In her own press statement Collins said she would continue to work with the group in helping with training projects for priests and bishops.

Boston Cardinal Sean O’Malley, the head of the commission, said in a statement that he had expressed to Collins “our most sincere thanks for the extraordinary contributions she has made as a founding member.”

"With the members of the Commission I am deeply grateful for Marie’s willingness to continue to work with us in the education of church leaders, including the upcoming programs for new bishops and for the dicasteries of the Holy See," said O'Malley. "Our prayers will remain with Marie and with all victims and survivors of sexual abuse.”

Dominican Fr. Thomas Doyle, an expert on the church's response to clergy sexual abuse, said in an interview that he thought Collins' resignation would cause the commission to lose trustworthiness among survivors and advocates who have pushed for decades for the church to better protect vulnerable people.

"Its credibility … is going to take a nosedive," said Doyle. "If they don't have a survivor on that commission, it's like if the board of directors of the American Medical Association [is] only made up of bureaucrats and no doctors."

"Here you have an issue that really has to have input from survivors," he said. "Quite frankly, the clerical world does not understand what this is all about."

Krysten Winter-Green, a member of the abuse commission, said in an interview that she finds it "difficult to conceptualize a commission of this nature without the benefit of the voice of survivors or victims."

"I think it will take some time to really look at the composition of this commission and forge a path ahead," said Winter-Green, a native New Zealander who lives in the U.S. and provides consulting services for religious congregations.

Saunders did not reply to a request for comment regarding his current status on the commission.

In her March 1 statement for NCR, Collins also expresses frustration that a sample template of guidelines for safeguarding children developed by the commission has not yet been published. She says that a Vatican office had created its own sample template and refused to join efforts.

Collins also mentions the commission's request, approved by the pope, that the Vatican create a new tribunal to judge bishops who act inappropriately in sexual abuse cases. While that tribunal was announced by O'Malley in June 2015, it was never created.

In place of the proposed tribunal, Francis signed a new universal law for the church in June 2016 specifying that a bishop's negligence in response to clergy sexual abuse can lead to his removal from office.

The law, given the name Come una madre amorevole ("As a loving mother"), also empowers four Vatican dicasteries to investigate such bishops and initiate processes of their removal.

Winter-Green echoed Collins' frustration with the reluctance of Vatican offices to work with the abuse commission.

"I think there's been a lack of cooperation, I would say, by some dicasteries in the curia," she said. "I really do not know where it comes from, but I do know that it does a grave disservice to survivors and victims and it doesn't really promote the healing and care that the commission is about."

"If this commission is going to really accomplish what His Holiness wants it to accomplish, then I think we need to take a very, very serious look at where we are presently and where we see this commission going in the future," said Winter-Green.

Doyle said he thinks the commission needs to be given the power to rewrite its mandate in order to be more effective.

"They are a consultative commission," he said. "They have no power. There has to be some mechanism where they can get by the curia and … get things done."

Asked what she might say to an abuse survivor who thinks it is not appropriate for a Vatican commission on abuse to not have a member who is a survivor, Winter-Green responded: "I would have to agree."

Arsonists sought in connection with fires at three Australian parishes