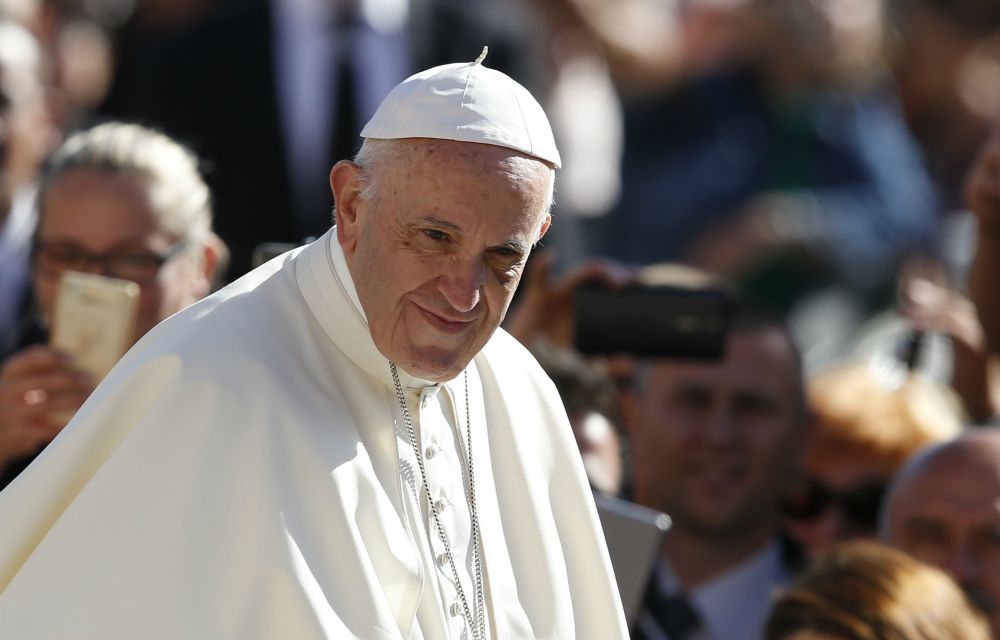 Pope Francis greets the crowd during his general audience in St. Peter's Square at the Vatican Sept. 20. (CNS photo/Paul Haring)

Pope Francis has admitted that the Catholic Church waited too long before taking reports of clergy sexual abuse seriously, suggesting that the former practice of moving priests accused of abuse to new ministries instead of reporting them to authorities kept the church numb to the scope of the situation.

In his first formal meeting Sept. 21 with the now three-year-old Pontifical Commission for the Protection of Minors, the pontiff also called "prophetic" the men and women who urged the church for decades to face the problem.

"I know it has not been easy to start this work," the pope told the members of the commission in off-the-cuff remarks notable for their frankness. "You have had to swim against the current because there is a reality: the church has taken consciousness about these crimes in a delayed manner."

"When the consciousness is delayed, the means for resolving the problem are delayed," said Francis. "I am aware of this difficulty. But it is a reality. I’ll say it so: We have come to this late."

"Maybe the old practice of moving people around, of not facing the problem, kept our consciousness asleep," the pope suggested. "Thanks to God, the Lord sent prophetic men and women in the church … who got others involved and began this work to face the problem head-on."

Francis told the members of the pontifical commission that while the speech he had prepared for their meeting was important, they had a "right" to hear from him spontaneously in order to learn "how things have come and how they are going" with the church's response to clergy sexual abuse.

The commission is meeting in Rome this week for a plenary assembly. While Francis greeted some of the group's members at their first meeting in May 2014, he had never before formally met with them or offered public remarks about their work.

The pope's words come as the group has recently faced public questioning of its effectiveness in stopping future abuse of children in the Catholic Church. It is currently operating without any active members who are abuse survivors, following the March 1 resignation of Marie Collins, who cited frustration with Vatican officials' reluctance to cooperate with the group's work.

While Francis did not address Collins' resignation directly, he referenced concerns that he said had been raised over how the Vatican's Congregation for the Doctrine of the Faith handles cases of clergy abuse, something that Collins has written about for NCR.

The pope said he had been asked if responsibility for handling clergy sexual abuse should be moved from the doctrinal congregation to one of the Vatican's tribunal courts.

"I believe that for the moment that resolving the problems of abuse has to be under the competence of the Congregation for the Doctrine of the Faith," Francis said.

Francis also spoke about the work of a commission he created in January 2015 to hear appeals of priests accused of sexual abuse. He said that commission, led by Maltese Archbishop Charles Scicluna, is working well but "has to be adjusted a bit, with the [added] presence of some diocesan bishops who have dealt with the problem in situ."

The pope announced that he has decided that once a priest is proven to have abused a minor he will no longer be able to appeal his case. 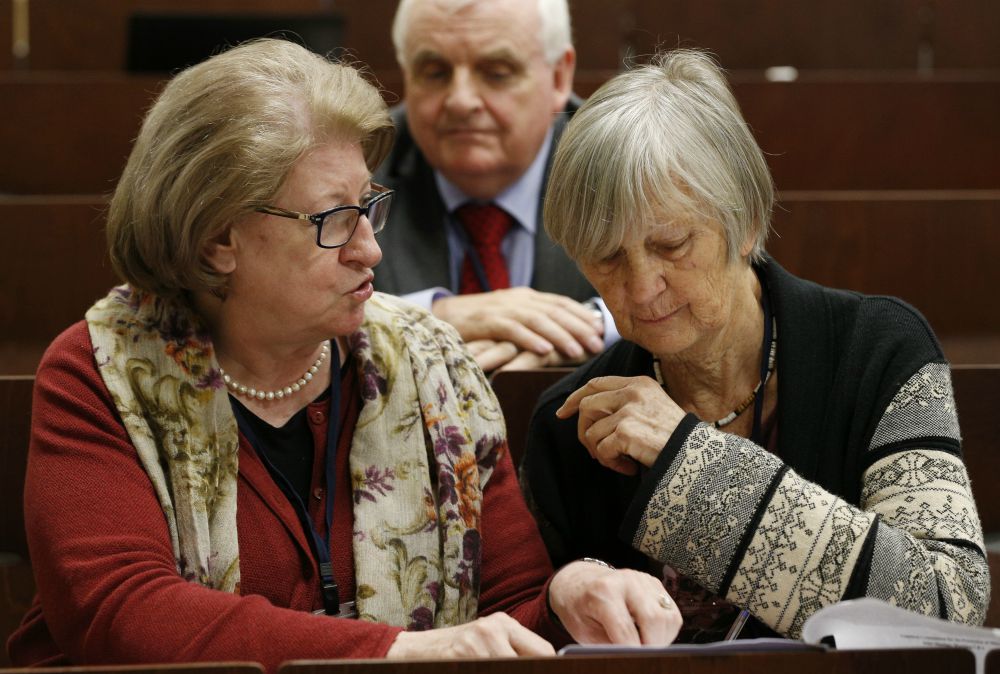 Hanna Suchocka and Dr. Catherine Bonnet, both members of the Pontifical Commission for the Protection of Minors, talk during a seminar on safeguarding children at the Pontifical Gregorian University in Rome March 23. Also pictured is commission member Bill Kilgallon. (CNS/Paul Haring)

"I have decided to rebalance this commission a bit, and also to say that a proven abuse of minors is sufficient to not receive an appeal," he said. "If there's proof, then it's definitive."

Francis addressed his power as pope to pardon priests found guilty of abuse. He said frankly: "I have never signed one of these [pardons] and I will never sign one."

"I was new and I did not understand these things well," said the pontiff. "Confronted with the two [choices], I chose the more benevolent." Francis did not specify if the priest committed abuse again, but said that two years later he "re-fell."

"I learned from this," said the pope. "I learned that [pedophilia] is an ugly sickness … we have to get it in our heads that this is a sickness."

Ending his off-the-cuff remarks, Francis thanked the pontifical commission for their efforts and referred to the work left to be done to make sure the Vatican is responding to clergy sexual abuse.

"Without you who brought the thing off the ground it would have been impossible to do what we have done and to do what we must still do in the [Roman] Curia," he told them.

The meeting between the pope and the commission started Sept. 21 with an address by Boston Cardinal Sean O'Malley, the commission’s president. The cardinal called the safeguarding of children "an integral part of the mission of the church."

O'Malley also said he expected that his group would be offering recommendations to the pope at the end of their meeting in Rome for the "renewal" of their membership after their three years of work.

Kilgallon also referenced a concern Collins made public in her March 1 statement of resignation: that not all Vatican offices have complied with a papal directive to respond to letters sent by abuse survivors. He said the same working group recommends "adoption of the commission's correspondence protocol by dicasteries, episcopal conferences and religious superiors."

In his undelivered prepared remarks to the papal commission, Francis said he feels a "profound pain in his soul" for abused children.

"Permit me to say with complete clarity that sexual abuse is a horrible sin, completely opposed to and in contradiction with what Christ and the church teach us," said those remarks. "I reiterate today once again that the church, at all levels, will respond with the application of the most firm measures to all those who have betrayed their call and abused the children of God."

"The church irrevocably and at all levels seeks to apply the principle of 'zero tolerance' against sexual abuse of minors." the remarks continued.

Francis also mentioned Collins by name in his prepared text, calling her "one of your founding members" and praising the presentations she and O'Malley gave last week on preventing sexual abuse to a meeting of new bishops in Rome. He said the presentations were "favorably received."

A version of this story appeared in the Oct 6-19, 2017 print issue under the headline: Francis: Church waited too long to respond to sex abuse.