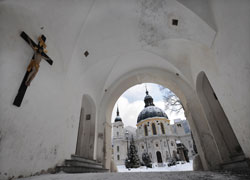 The Benedictine Monastery of Ettal, Germany: One hundred former pupils at the monastery's school have accused former teachers of sexual abuse and excessive brutality. (AP/Dapd/Christof Stache)

News of the long-standing, systematic abuse of pupils by Jesuit teachers at prestigious schools in Germany in the 1970s and ’80s first hit world headlines Jan. 29, when Jesuit Fr. Klaus Mertes, rector since 1994 of the “Canisius-Kolleg,” an elite Jesuit high school in Berlin, broke the story to the press.

While both the Vatican and the order had known of the abuse, the accusations had been suppressed. Mertes said two abuse victims had approached him six years ago, but both had begged him not to tell anyone about the abuse and so he did not report it at the time.

When, however, five more pupils turned to him after an alumni reunion in December 2009 and several more in January this year, he decided to write to 500 alumni.

“I am deeply shocked and shamed by these appalling assaults, which were not single incidents but took place systematically over several years,” he wrote. He asked any pupils concerned, or who had observed anything, to come forward. Twenty-two pupils wrote to say they had been abused but over a hundred have since reported to the Jesuit order’s attorney for sexual abuse cases.

Two days later, Jesuit Fr. Hans Joachim Martin, the former headmaster of St. Blasien, another elite Jesuit school in the Black Forest, informed the German Catholic Press Agency that in the 1970s one of the Jesuit teachers who had abused boys at the Canisius College in Berlin had been moved to St. Blasien, but the school had not been informed of his “criminal past.” He had continued to seriously abuse boys at St. Blasien but the abuse “was always swept under the table,” Martin said.

That same day, Fr. Stefan Dartmann, the Jesuit provincial in Germany, spoke at a news conference, begging forgiveness. “We are faced with the gnawing question as to why these incidents did not come to light at the time. The correct thing would have been to notify the prosecuting authorities,” he said.

The abuser, Martin Statt, who left the Jesuit order in 1992 and now lives in South America, wrote a letter of apology to his former pupil-victims at the end of January, admitting that he had abused children and young people for years, but insisted in an interview with the German weekly Der Spiegel that he had informed both his order and the Vatican in detail of his abuse problem when he applied for laicization in the ’90s.

The Statt case was just the beginning. From then on, hardly a day passed without new cases of sex abuse in church institutions coming to light.

In the first week of February Der Spiegel conducted a survey across Germany’s 27 Catholic dioceses to investigate the prevalence of suspected abuse by priests and church employees. Some 24 of the 27 dioceses responded. According to the findings, 94 priests and church employees had been suspected of sexually abusing minors since 1995. Thirty of them had been tried and sentenced but many cases were barred because of legal difficulties.

By this time a third prominent Jesuit school was affected. After two victims came forward claiming to have been abused at the well-known St. Aloysius’ Jesuit College at Bonn, the principal, Fr. Theo Schneider, informed the Jesuit provincial that he was stepping down until all cases of sexual abuse at the school had been clarified.

Individual German bishops and senior churchmen began to speak out. “This is quite, quite terrible. It has bowled me over,” Archbishop Werner Thissen of Hamburg said, referring to abuse cases at the Sankt Ansgar Jesuit school in Hamburg. Bishop Norbert Trelle of Hildesheim said the abuse cases filled him with shame and in a pastoral letter read from all churches in his diocese he appealed to any further victims to come forward. But Bishop Walter Mixa of Augsburg, a staunch conservative, claimed that the sexual revolution that had begun in 1968 was partly to blame for the abuse.

The most open admission of the church’s guilt was by the provost of Hanover Cathedral, Fr. Martin Tenge, who said in a sermon to the thousands who had gathered in his cathedral, “The whole institution [of the church] is to blame, as it is responsible for creating a mentality of ‘Please don’t talk about it.’ We owe deep apologies to the victims. I know several priests who were guilty of sexually abusing minors, I also personally know the victims, and I know some who are both victims and perpetrators. I think it quite right that the victims are furious and are venting their fury on the church.”

The president of the German bishops’ conference, Archbishop Robert Zollitsch, remained silent for three weeks. Apparently the bishops had agreed not to speak out until after their plenary Feb. 22-25, a decision that Archbishop Reinhard Marx of Munich later said had perhaps been “unwise.” After the plenary, Zollitsch broadcast a terse official apology to the victims. Politicians were now involved as the German minister of justice demanded that the bishops take immediate steps to clear up the crisis and discuss compensation for the victims.

The bishops announced that Bishop Stephan Ackermann of Trier had been appointed special coordinator for abuse cases; a hotline for all questions related to abuse would be installed; the bishops would seek contact with victims’ associations; and the bishops’ conference would update its 2002 guidelines. There would, however, be no automatic reporting to the police, Zollitsch said. The church would first examine each reported case internally and then do its best to persuade the victim and the perpetrator to contact the police. He also rejected suggestions to set up a compensation fund for victims.

By the first week of March, more than 300 abuse victims from Catholic institutions in 22 dioceses had come forward and at least 10 religious orders were involved. The tidal wave had also reached Bavaria, homeland of Pope Benedict XVI. A massive abuse scandal hit the Benedictine Monastery of Ettal in Bavaria in the first week of March. One hundred former pupils accused former teachers not only of sexual abuse but also of excessive brutality. The Munich archdiocese asked Abbott Barnabas Boegle and Headmaster Fr. Maurus Krass to step down and police raided the monastery. The monastery has now asked the pope for a visitation.

And Germany’s oldest choir, the “Regensburger Domspatzen” where the pope’s 86-year-old brother, Msgr. Georg Ratzinger, was master of choristers from 1964 to 1994, was also involved. A former headmaster of the school where the choristers boarded was accused of sexual abuse and excessive corporal punishment in the 1960s. Msgr. Ratzinger said he had never heard anything about sexual abuse but admitted occasionally slapping pupils.

On March 12, the same day that Zollitsch met Benedict to discuss the scandal, a German daily revealed that in 1980, when Cardinal Joseph Ratzinger was archbishop of Munich, he gave permission for Fr. Peter Hullinger, who had been accused of sexually abusing minors in Essen in northwest Germany, to be rehoused in the Munich archdiocese for therapy. (See accompanying story on Page 7.) The vicar general, Gerhard Gruber, moved Hullinger to a parish “as, except for one hour’s therapy, we didn’t want him to have nothing to do all day.” Hullinger later again abused minors -- but that was after Ratzinger had left Munich for Rome in 1982. Even after having been convicted in a German court, Hullinger continued working with children and young people and was not suspended until the story came to light this March. Fr. Joseph Obermeier, priest of the Munich Cathedral and head of the archdiocese’s pastoral department responsible for Hullinger, has since handed in his resignation.

That brings us to Austria. When they met for their plenary in the first week of March, the president of the Austrian bishops’ conference, Cardinal Christoph Schönborn, recalled that in 1995, the Austrian church went through the Groër affair, when the then-archbishop of Vienna, Cardinal Hans Hermann Groër, stepped down after being accused of sexually abusing a minor. A year later the first ombudsman for church abuse victims was appointed in the Vienna archdiocese and the other Austrian dioceses have since followed Vienna’s example.

However, on March 8 of this year, the archabbot of St. Peter’s in Salzburg, one of the oldest Benedictine abbeys in the world, resigned after admitting that he had abused a 12-year-old boy 40 years ago, and victims in Austria began to come forward.

On March 11, Schönborn first used the word “abuse tsunami” to describe the crisis sweeping over the German-speaking countries. The number of victims is thought to be approaching 400, at least 12 religious orders are involved, and seven high-ranking churchmen in Germany and one in Austria have resigned. Rumours that thousands are leaving the church abound. (German and Austrian Catholics have to pay compulsory church tax, which is the equivalent of 8 percent of income tax in Germany and a little over 1 percent in Austria. If they fail to do so the church can and does sue them. But they can “sign out” at their local municipal authority, which means they no longer have to pay tax but from then on they can no longer receive the sacraments or have a Catholic burial.)

Meanwhile, the abuse crisis reached Switzerland in mid-March, where 60 suspected cases committed over the past 15 years have come to light. The Swiss bishops’ conference is looking into them. As in Germany and Austria, suspects do not have to be reported to the prosecuting authorities in Switzerland.

There is a little light at the end of the tunnel, however. The Bavarian bishops’ conference decided at its plenary in March that from now on abuse suspects should be reported to the police immediately. Roundtable talks between the church, politicians and all groups in society concerned are to be held in both Germany and Austria within the next few weeks. Whether abuse victims’ associations will be included in the talks still remains open, however. The Jesuit order and the German bishops are still reluctant to discuss compensation, but Schönborn has suggested that the perpetrators should pay. As a large proportion are religious and have taken a vow of poverty, this would involve the religious orders.

The general mood among Catholics in Central Europe is one of gloom. They are particularly disappointed that the pope did not even mention the German crisis in his letter about the crisis in Ireland. To many of them it seems that the walls of their church as an institution are crumbling.

[Christa Pongratz-Lippitt is correspondent in Vienna, Austria, for the London-based Catholic newspaper The Tablet.]