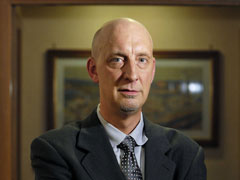 Steeped in the writings of Camus, Kierkegaard, Simone Weil and Emerson, Peter Isely put his career as a therapist on the line in 1993 when he identified himself as a victim of clerical sex abuse and criticized Milwaukee Archbishop Rembert Weakland, who at the time was lionized by NCR, Commonweal and The New Yorker as a progressive leader of a post-Vatican II church. Weakland had a victim assistance program, Project Benjamin, of which Isely was deeply suspicious.

Born in Fond du Lac, Wis., Isley and a twin brother -- the youngest of eight siblings -- were 9 months old when their father, a realtor and contractor, died in a 1961 automobile accident. The family moved into a smaller house and struggled financially. Daily Mass at St. Joseph Parish School shaped his boyhood. “The community at St. Joe’s raised me,” he told writer Marie Rohde for a recent Milwaukee Magazine profile. On scholarship at the Capuchin-run St. Lawrence Seminary High School, he was popular with peers, an academic star and a sexual target of the principal: Fr. Gale Leifeld sexually assaulted Isely and 38 other boys Isely has spoken with. All thought they were alone. Two committed suicide.

After earning his bachelor’s degree at the University of Wisconsin-Milwaukee, Isely won a scholarship to Harvard Divinity School in Cambridge, Mass. As he wrestled with meanings of the Holocaust, a course on the psychology of secrecy spurred him to confront Leifeld’s weight upon his past. Back in Milwaukee, after another degree and establishing a therapy practice, he bristled as Weakland responded to early news coverage of clergy abuse cover-ups by promoting Project Benjamin, a therapy program to reconcile victims and church.

In 1989, Isely confronted the Capuchin superior, Fr. Ken Reinhart. Though the order assisted him with $3,900 for his own counseling, Isely said, “I couldn’t get over his emotional silence, his passivity -- no outrage over what Gale Leifeld did to their own teenage seminarian. I thought I was alone then.”

In 1992, Isely published an open letter to Weakland in the Milwaukee Journal, disclosing that he was a clergy victim, saying: “I do not hear anger, from you, towards these priest offenders. Are you and your colleagues not enraged by how these men have ... taken advantage of your good office?”

Leifeld was suspended from ministry in 1992 -- “Any kind of public appearance would mean the whole story would be resurrected again by the press,” Weakland explained in a letter to the Capuchins -- but Leifeld remained a priest until he died of cancer in 1994. Several lawsuits against the Capuchins were dismissed after the Pritzloff decision.

Despite the early wave of media reports on such cases, Weakland, with his national reputation, filled the cathedral on Sundays. The cerebral persona gave no hint of his sexual relationship with a young Marquette University theology student, Paul Marcoux. They broke up in 1980.

In 1987, when three parochial school teachers contacted Weakland, protesting the behavior of a priest (who was later twice convicted of abusing boys), Weakland had the teachers fired.

Project Benjamin refused to identify perpetrators. “Maybe it is not power alone that corrupts, but power when wed to secrecy,” Isely wrote in a Journal op-ed. “Weakland should lift the seal.”

Later, Weakland in a 1994 interview chided the media for lacking “sophistication in these matters.” Many perpetrators were not pedophiles, but men focused on adolescents, Weakland said, “and then the boy gets a little older and the perpetrator loses interest. Then is when the squealing starts and you have to deal with it.”

Rohde was discovering more predators recycled by Weakland when the Milwaukee’s two daily newspapers merged into the Journal Sentinel in 1995. Church officials pressured the editor, Mary Jo Meisner (who has since left the paper) to pull Rohde off the story. Rohde was exiled to a suburban bureau. In 1997, with Rohde sitting on information she couldn’t publish, the “squealing” hit Weakland, though not publicly. Marcoux, who was in his 20s during their relationship, now sought compensation for emotional distress. Weakland approved a secret $450,000 payment as he was closing a small-town parish whose members pleaded to keep it open.

In May 2002, on assignment for ABC News, I obtained a copy of the 1980 letter Weakland wrote to Marcoux on their breakup. I located Marcoux, who agreed to an on-camera interview with ABC reporter Brian Ross. Weakland resigned the day after the broadcast; he stayed in Milwaukee.

As The Boston Globe ignited a chain reaction of media coverage on the abuse crisis in 2002, Rohde resumed her reporting on the church. Several years ago she left the newspaper with a buyout and is now a freelance writer.

Through the late 1990s, with Pritzloff shielding the church from lawsuits, Project Benjamin officials negotiated several settlements of $5,000 each to survivors, who signed agreements not to sue, nor speak out.