For Michael Bland, as for many victims of clerical sexual misconduct, this summer's relentless news of abuse and cover-up in the U.S. church has reopened painful wounds.

And while many Catholics are demanding to know "who knew what and when" about retired Washington archbishop Theodore McCarrick, Bland says church officials do know this: His abuser continues to teach canon law at a pontifical university.

John Huels has maintained his position as a full professor at Saint Paul University in Ottawa, Canada, even after reports in 2002 that he had — at least temporarily — left his position and would seek laicization.

"It's horrific and sad and very painful," said Bland, a psychotherapist in private practice in Chicago, who has served as a clinical-pastoral coordinator for the Chicago Archdiocese's victim assistance ministry and on the U.S. bishops' National Review Board for the Protection of Children and Young People.

Bland is angry that Huels, who has admitted he abused Bland as a teenager, continues in his work as a prominent liturgical canonist and a teacher on a college campus — albeit one in another country.

"This is where the church loses its credibility," Bland told NCR. "People know John Huels' history."

When Bland was 15, Huels abused him while associate pastor at St. Joseph Parish in Carteret, New Jersey, which was staffed by members of the Friars Servants of Mary, known as Servites. The parish is in the Diocese of Metuchen, New Jersey, which was headed by McCarrick at that time, but the then-bishop did not know about the abuse, Bland said.

Bland revealed the abuse in 1994, nearly seven years after he himself had been ordained a Servite priest, and when Huels was elected to lead the Chicago-based province of the religious order. Huels was also a professor at Catholic Theological Union at that time.

After Bland reported the older priest, he was flown to Rome to meet with the Servites' superior general, who encouraged Bland to reconcile with Huels. Bland refused, and in the meantime, a second victim came forward.

Huels resigned as provincial, and eventually left Chicago and taught in Africa for several years. He was hired by St. Paul's in 1997. Bland left the priesthood in 1996.

In 2002, at the U.S. bishops' meeting in Dallas, Bland was one of several victims to share firsthand stories, and his powerful testimony is said to have helped convince church leaders to adopt the "no tolerance" policy of the so-called "Dallas Charter." Without naming his abuser, Bland told the prelates: "The priesthood lost me, but kept the perpetrator."

Two months later, St. Paul University announced that Huels had temporarily left his posts as professor and vice dean of canon law and was on medical leave for severe depression. Then-Ottawa Archbishop Marcel Gervais also said in a statement that Huels had "announced his intention to leave the Servite order and seek laicization" and stressed that the archdiocese had not previously been informed of any "inappropriate behavior" in Huels' background.

An archdiocesan spokesperson confirmed to NCR that the archdiocese told Huels in 2002 that he was not to present himself as a priest or religious, or function as a priest.

"As far as we know, he has not been representing himself as a priest, nor has he done any pastoral ministry in our archdiocese," Deacon Gilles Ouellette, communications officer and executive assistant to current Ottawa Archbishop Terrence Prendergast, wrote in an email to NCR. 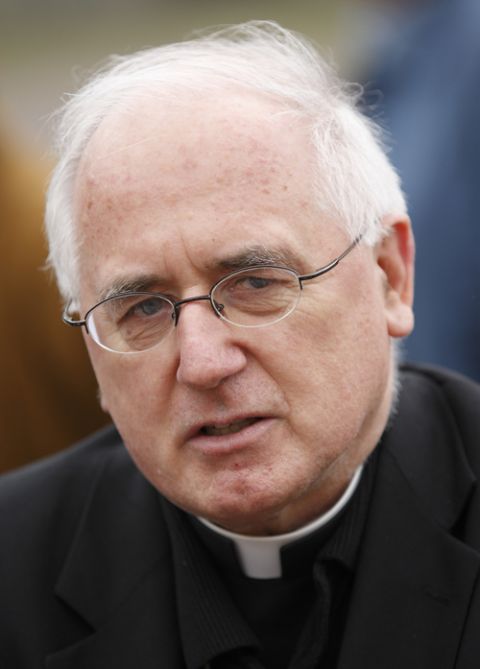 "In the Archdiocese of Ottawa, a cleric who is the subject of a pending or a confirmed allegation of sexual misconduct would not have faculties," Ouellette said.

Neither Ouellette nor St. Paul's rector, Chantal Beauvais, could confirm whether Huels was still a priest or not. Repeated attempts to contact Huels and the Servite provincial office in Chicago were not successful. Huels was not listed as a priest in the 2016 Official Catholic Directory.

Beauvais said Canada's information privacy laws prevent her from speaking about an individual, but she confirmed that ecclesial faculty — including those who teach canon law or theology — require a mandatum, or permission from the local bishop, to join St. Paul's faculty.

"If protocols would have been followed, [Huels] would have been given a mandatum when he was hired here," she said, noting that she could not confirm an individual's mandatum status. A mandatum can be revoked, although it is not regularly updated.

Beauvais also could not confirm whether Huels teaches undergraduate students or seminarians, but the list of "Courses Taught" on the school's website indicate graduate-level courses.

"We can't change the past," Beauvais told NCR. "But Saint Paul's University wants to be part of the solution. It's so important that anybody having to do with the church feel that they are treated with the utmost respect and dignity. That's what we at Saint Paul's stand for."

But Bland does not feel respected when he hears that his abuser is speaking at conferences, being published in books and academic journals, and teaching on a college campus.

"If someone leaves the priesthood, he's told he can be active in the church, but he can't be a leader," Bland said. "I think teaching Catholic canon law is being a leader. How can he be an expert on the law that he violated?"

Huels' case may be complicated by the fact that he has moved to another country — more common with religious order priests than diocesan ones, said a leader of a victims' advocacy group.

Religious orders "transfer [priests and brothers] all the time, whether they're abusers or not," said Peter Isely, a founder of Ending Clergy Abuse, a global advocacy organization, and himself a victim of abuse by a religious order priest.

"So geographical transfer, including internationally, is not uncommon at all, especially if the order has a wide international reach," Isely said.

Isely notes a high percentage of religious order priests among abusive clergy in Australia and Ireland, but says leaders' reaction to allegations "depends on the order."

"Some orders are doing a good job, and some are terrible," he said. "It depends on the provincial. But you can't rely on a policy, because you don't know whether it's being followed or not. Policy is not law. There is no dependable oversight or review."

Isely said it was unclear whether religious order priests are covered under the Dallas Charter norms, which state that bishops and major superiors are "to meet periodically to coordinate their roles concerning the issue of allegations made against a cleric member of a religious institute ministering in a diocese/eparchy" (Article 15).

But a representative from the Conference of Major Superiors of Men*, or CMSM, said religious order priests and brothers are covered under the Dallas norms when they receive faculties to work in a diocese. The council, in conjunction with a risk-management group, Praesidium Religious Services, also created its own "Standards for Accreditation."

Those standards include "zero tolerance" and mandated communication about a credible allegation to a bishop when a priest or brother moves to another diocese, said Jesuit Fr. Jerry McGlone, the CMSM's associate director for the protection of minors.

But compliance varies, said McGlone, with about 17 percent of current religious institutes in the United States not complying with the CMSM accreditation or some of form of compliance from another group.

Isely sees it as "an issue of authority" about which church leaders are responsible when there is a credible allegation against a religious order priest. Religious orders "see themselves as quasi-independent, and a provincial has his own canonical authority, but they can't operate in a diocese without the approval of the bishop."

But Bland questions whether the current policies are working. "The church is spending a lot of money on safe environment training and criminal background checks, but the missing link is people within their own ranks," he said.

Bland calls for a universal release by dioceses and religious orders of all credible allegations, including in cases where priests have left the United States.

Although he has found healing with the help of a therapist and spiritual director, as well as through his work with other victims and on the National Review Board, Bland wonders whether this latest iteration of the scandal will result in justice for victims, including him.

"I have some hope, but I have little trust," he said. "I think I have found healing, but I have not found accountability."

*This story has been updated to correct the title of the Conference of Major Superiors of Men.