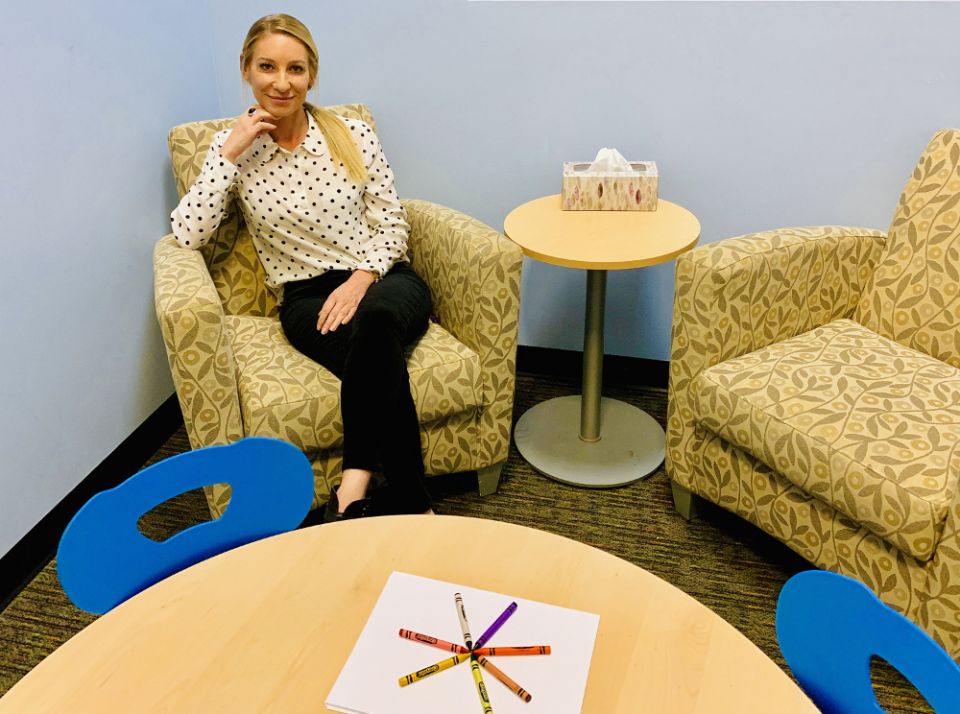 Leyla Sandler, director of forensic services at Safe Shores in Washington, is pictured in a Dec. 19, 2018, photo. Safe Shores is one of 854 children's advocacy centers located across the nation. (CNS/Donna Lewis Johnson, Safe Shores)

Washington — On a long, low shelf at Safe Shores in downtown Washington, colorful figurines of wild animals, army soldiers, a winged dragon and an angel appear to be the toy collection of an overly neat child.

It's the "sand tray room," where young survivors of sexual assault arrange figures in a tray of sand to tell stories about their experiences, often, too difficult to put into words.

One 10-year-old girl, abused by her father, remained silent through five sessions of therapy. Only after arranging figures in the sand tray, creating a tableau depicting a child separated from adults by a bridge, did she open up and talk at length.

"We've used sand play in this field for about 25 years," remarked Lisa Dominguez, director of clinical services at Safe Shores, one of 854 children's advocacy centers located across the nation.

One out of every 10 Americans will suffer sexual abuse, involving physical contact, before turning 18 years old. An astonishing 90 percent of child victims personally know their abuser. Of those offenders, approximately 30 percent are family members — a tragic statistic that climbs to 50 percent when you look at who perpetrates abuse against children under age 6.

"Sexual victimization of children is a serious and pervasive issue in society. It is present in families, and it is not uncommon in institutions where adults form mentoring and nurturing relationships with adolescents, including schools and religious, sports and social organizations," according to a report on the causes and context of abuse of minors prepared by the John Jay College of Criminal Justice some years ago as a mandate of the bishops' "Charter for the Protection of Children and Young People."

Over the last 30 years, the network of children's advocacy centers has emerged as one of the nation's most comprehensive responses to sexual violence against children.

The centers serve three goals: providing treatment to victims and support to their caregivers and families; collecting evidence and coordinating investigations with law enforcement and child welfare authorities; and training those with responsibility for children, especially schools, on prevention strategies.

Experts agree: the major reason child sexual assault has garnered intense attention — and more severe criminal sanctions — is the mountain of evidence that it results in deep, often lasting, harm.

Read this next: Child sex abuse called 'a serious and pervasive' issue in US society

"Not only mental health, but long-term negative health outcomes" may be the result of untreated abuse, observed Dominguez.

According to the U.S. Centers for Disease Control and Prevention, a direct correlation exists between child sexual abuse and the number of what it calls "adverse childhood experiences," including sexual assault, and lifelong problems with health (obesity, suicide attempts, heart disease, cancer, stroke), behavior (smoking, alcoholism, drug use) and life fulfillment (graduation rates, lost time from work).

"We know that trauma impacts the brain even in utero and it impacts the wiring of the brain, but we know the brain can be rewired. It can heal," Dominguez told Catholic News Service.

The evidenced-based therapy model used by Safe Shores is trauma-focused cognitive behavioral therapy. It begins with skill building and "psycho-education" to help survivors and caregivers "understand what they are living," including what happens to the brain when it experiences trauma.

Some victims become hyper-vigilant — for example, they can't sit still. Others are passive, as though they are frozen.

The treatment focuses on "building a toolbox" of basic skills for relaxation and coping, Dominguez said: "Kids often feel very responsible for what happened to them. They feel the abuse was their fault."

Dominguez continued, "The thing about sexual abuse for kids that is so confusing is that, first, more often than not, the child knows the offender so it was someone they trusted, and often because of that trust, the abuse was allowed to happen." 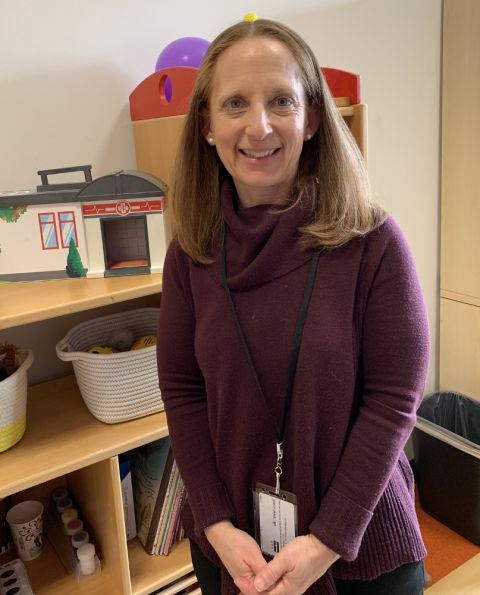 She continued, "In addition, because of the body's natural physiological response, some parts of the abuse might have felt physically pleasurable to the child." The combination of shame, self-blame and fear creates a particularly combustible set of emotions.

"People who want to sexually abuse children are strategic," warned Ashley Harrell, director for family advocacy, prevention and outreach at Safe Shores. "They groom the whole family. Often, family members will say, 'This is the person I trusted the most!' "

As a result, a child who reports abuse within the family's trust circle may not be believed — a further traumatizing experience.

As well, when the abuse is finally confirmed, innocent members of the family are horrified and heart-broken. Reconstructing trust within the family — absent abusers and those who deny it happened — is major task.

In addition to long-term mental health treatment, Safe Shores provides a variety of other supportive services for families, including a weekly caregiver support group, offered both in English and Spanish, where dinner and child care are provided. CACs provide services without charge.

Therapy is one part of the CAC mission; providing evidence for investigations is another. Safe Shores conducted close to 800 forensic interviews last year.

Down the hall from the Clinical Services Suite, past brilliant tropical fish languidly circling in a tank, is a room dedicated to interviewing child victims, outfitted with ceiling cameras and microphones. Children are told exactly where all the equipment is.

To avoid the once common practice of repetitious interviews of child victims by police, prosecutors, social workers, doctors and judges — a procedure that was unduly traumatizing in itself — CAC forensic teams conduct a fact-finding interview in a "developmentally sensitive and legally sound manner" as part of a larger investigative process, explained Leyla Sandler, Safe Shores' forensic services director.

The process results in one conclusive interview shared with all parties, a document that often becomes part of criminal proceedings against a perpetrator. Typically, law enforcement observes a forensic interview from another room.

In fact, members of the multidisciplinary team are located in the same building with Safe Shores, based in a renovated elementary school. Together under one roof are: officers with the D.C. Metropolitan Police Department; staff from the DC Child and Family Services Child Protective Services unit; attorneys with the U.S. Attorney's Office and Office of the Attorney General for D.C.; and medical staff from the Child and Adolescent Protection Center, which is part of a unit of Children's National Medical Center.

Again, the purpose is to minimize trauma on the child, and maximize efficiency for the justice system to make perpetrators accountable.

"What we see as healing is a reduction in trauma symptoms, so kids can tolerate normal stressors and frustrations that we all encounter day to day. We see a decrease in nightmares. We see better academic performance. We see enhanced communication with caregivers. We see re-engagement in activities that used to bring them pleasure — a team activity or Cub Scouts. We see children better able to tolerate their emotions," said Dominguez.

She added, "Having a renewed sense of trust and safety, that is key. Because that's the biggest thing lost when a trusted adult abuses you: You're left asking, 'Who can I trust?' "