After overturning of Pell's conviction, Francis prays for those suffering 'unjust sentences' 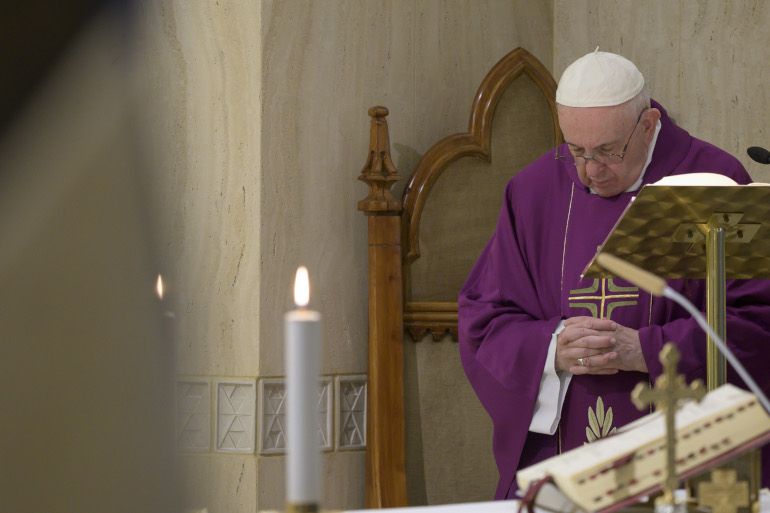 Opening his daily Mass at the Vatican's Domus Santa Marta, which is being live-streamed each day due to the global Covid-19 pandemic, the pontiff said that Catholics during the season of Lent have seen "the persecution that Jesus underwent, and how the doctors of the law persecuted him."

"I would like to pray today for all those who suffer unjust sentences, due to rage [against them]," Francis said.

The pope did not mention Pell by name. But the Mass began at 7 a.m. in Rome, about five hours after the overturning of the cardinal's conviction was first announced by the High Court of Australia, the country's final court of appeal.

A few hours later, the Vatican press office released a statement saying the Holy See "welcomes" the court's decision but also "reaffirms its commitment to preventing and pursuing all cases of abuse against minors."

Pell had originally been convicted in December 2018 on five counts of molesting two choirboys in the 1990s. The high court's decision concluded there was "a significant possibility that an innocent person has been convicted because the evidence did not establish guilt to the requisite standard of proof."

The cardinal was released from prison immediately after the decision. He had spent 405 days in custody.

Pell has long been Australia's highest Catholic official. After serving as the archbishop of Melbourne and then Sydney, Francis brought him to Rome in 2014 to head up the Vatican's new centralized financial office, the Secretariat for the Economy.

The cardinal took indefinite leave from his Vatican role in June 2017, returning to Australia after police in the country first announced they would be pursuing charges against him. Francis has since appointed a new person to fill Pell's former position at the secretariat.

Pell will turn 79 in June. Catholic cardinals normally retire at the age of 80, when they lose the right to vote in any future papal conclaves.

It is unclear whether the Vatican's Congregation for the Doctrine of the Faith will now continue its investigation into the charges made against Pell, which was put on hold as the cardinal made his appeal in Australia. The press office statement made no reference to that matter.

Francis had previously declined to comment on Pell's case, saying he wished to wait for the Australian justice system to go about its work.

But in a July 2016 press conference, the pontiff said he would speak once the cardinal's appeals had been heard, promising: "Once the justice system speaks, I will speak."

A few hours after Francis' remarks at Mass April 7, the pope's Twitter accounts in various languages repeated his message.

"In these days of #Lent, we've been witnessing the persecution that Jesus underwent and how He was judged ferociously, even though He was innocent," said the post to the English-language account.

"Let us #PrayTogether today for all those persons who suffer due to an unjust sentence because of someone had it in for them," it said.

Accountability | After overturning of Pell's conviction, Francis prays for those suffering 'unjust sentences'