Skip to main content
News
Vatican
This story appears in the Francis in Poland feature series. View the full series. 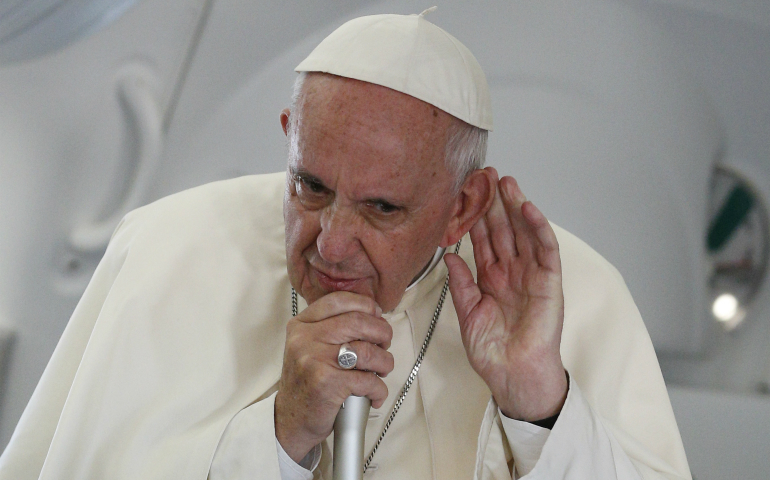 Pope Francis listens to a question from a journalist aboard his July 31 flight from Krakow, Poland, to Rome. (CNS photo/Paul Haring)

Pope Francis has asked the press to withhold judgment on reports that senior Vatican official Cardinal George Pell had inappropriate sexual contact with minors in the past, saying allegations against the prelate are still being investigated by Australian authorities.

"If I were to make a judgment in favor or against Cardinal Pell that would not be good because I would be making a judgment first," said the pope, responding to a question about what actions he may consider taking against the church official.

"There is doubt and there is that clear principle of law: in doubt, pro reo," said Francis, referring to the Latin term for the concept that a defendant cannot be convicted if doubts about his guilt remain.

"We must wait for the justice system and not make a premature judgment, [or] a judgment in the media, because this does not help," said the pope.

Pell is an Australian prelate whom Francis has entrusted with overseeing his reforming of the Vatican's financial system, appointing him as the head of the city-state's new Secretariat for the Economy in 2014. He also serves on the pope's nine-member advisory Council of Cardinals.

The Australian Broadcasting Corporation (ABC) reported Wednesday that police in the southeastern Australian state of Victoria, where Pell was born and served as a church leader in several dioceses, have interviewed eight people about allegations made against the prelate of inappropriate sexual contact with minors in the 1970s, 80s and 90s.

The report also said that the police had referred the matter to the local prosecutor's office for advice.

Pell -- who served as archbishop of Melbourne from 1996-2001 and archbishop of Sydney from 2001-14 -- has vigorously denied the allegations and said he would cooperate with any requests by authorities.

The cardinal previously faced allegations of past abuse in 2002, when the prelate took a leave of absence from his post in Sydney as an investigation into the matter occurred. The judge investigating the matter later said he found both the complainants' and Pell's testimonies truthful and dropped the investigation.

Francis was speaking Sunday in a half-hour press conference with journalists aboard the papal flight returning to Rome after his five-day visit to Poland for World Youth Day.

Other topics he addressed included why he has not responded to the recent attempted coup in Turkey and why he chooses to not call terrorist violence committed by those aligned with the so-called Islamic State as "Islamic terrorism."

"I do not like to speak of Islamic violence, because everyday when you read the newspapers you see violence," Francis responded on the latter subject, explaining that in Italy you often can read of men who kill their fiancés or their mother-in-laws.

"It is like a macedonia," he said, using the Italian name for a fruit salad dessert.

"One thing is true: I believe that in nearly all religions, there is always a small fundamentalist group," said Francis, adding: "We [Catholics] have it."

The pope then recounted the story he said was told to him by one of the Vatican's ambassadors in an African country. The ambassador, Francis said, had recounted that many Muslims are coming to the cathedral in his country's capital in order to walk through its holy door for the ongoing Jubilee Year of Mercy.

"These are Muslims who want to make the Jubilee," said the pontiff. "They are brothers and sisters."

"This is a small fundamentalist group that is called ISIS," said Francis. "You cannot say -- I believe it is not true and it is not just -- that Islam is terroristic."

The pope then said he wanted to add something he did not know whether or not he should say "because it is a bit dangerous."

"Terrorism grows when there is not another option, and while at the center of the global economic system there is the God of money and not the person, man and woman," the pontiff continued.

"This is the first terrorism," said Francis. "You have chased away the miracle of creation, man and woman, and you have put in its place money. This is a base-level terrorism against all humanity. Let's think about it."

Falling for the Madonna

Responding to the question about why he has not made a public statement about the attempted coup in Turkey and President Recep Erdogan's subsequent decision to detain thousands he says helped the coup effort, Francis said: "I have not spoken because I am not sure with the information I have received what is happening there."

The pope said that while he is always concerned about the situation for Catholic and Christian minorities in the predominantly Muslim country, that is not why he has not spoken up.

"It is true, you must always avoid causing bad things for the Catholics," said the pontiff. "But not at the price of truth."

"You are witnesses that when I have to say something that affected Turkey, I said it," he continued, in an apparent reference to his decision to refer to the World War I-era killings of some 1.5 Armenians as "genocide" during his June trip to Armenia.

Turkey, the successor state to the Ottoman Empire, claims that the word genocide does not accurately describe the killings. The country's deputy prime minister criticized Francis' use of the term, calling it a "great disgrace" that reflects the "traces and all the reflexes of the Crusades."

Francis also spoke on a more personal note during Sunday's press conference, explaining what had caused him to fall in a dramatic moment during a Mass in Poland Thursday. At one point during a celebration in the southern city of Czestochowa, the pontiff missed a step near the altar and fell to the ground.

Laughing, the pope explained: "I was looking at the Madonna [near the altar] and I forgot about the step."