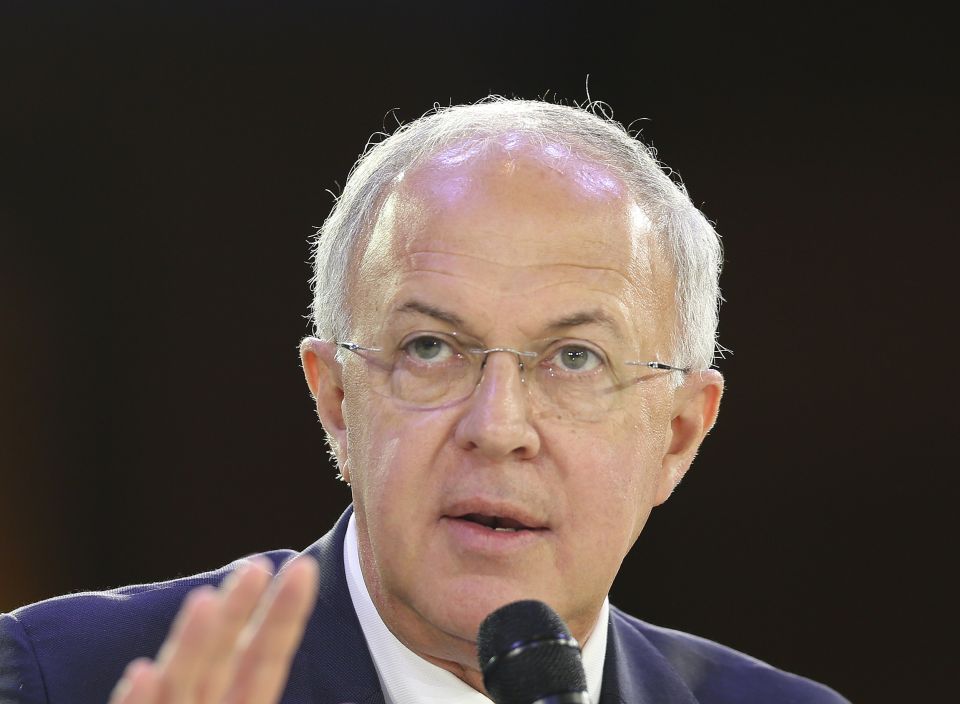 Carl Anderson, CEO of the Knights of Columbus, speaks during the 2017 Catholic convocation in Orlando, Fla. Perpetrators of abuse, and those who cover it up, must "come clean" about their misdeeds, Anderson said in an Aug. 21 statement. He also said his organization has an important role in renewing and rebuilding the church. (CNS/Bob Roller)

Washington — After years of Catholics having to confess their sins to the clergy, it is now time for priests and bishops "to come clean about what they have done and what they have failed to do," the CEO of the Knights of Columbus said in a letter to his brother Knights and the organization's chaplains.

Supreme Knight Carl Anderson's letter, dated Aug. 21, came in response to the recent release of the Pennsylvania grand jury report on abuse claims in six dioceses and reports of a cover-up by some church leaders and the allegations of past abuse and other sexual misconduct made against Archbishop Theodore McCarrick.

"Repentance should include a full accounting of the misdeeds by those who have committed them. Archbishop McCarrick and others at fault owe us a full account of their actions, motivations and cover-ups," he said.

The abuse crisis represents "a crisis of commitment to the Gospel," Anderson said. He called for repentance, reform and a rebuilding of the church and said the Knights of Columbus -- laymen, priests and chaplains -- "will have an important role to play in rebuilding the church" and recommit themselves to doing that.

"Many feel deeply betrayed by those whom they long held in high regard," Anderson wrote. "Such concerns are shared not just in the United States, but in Europe, Latin America and elsewhere.

"These sins of commission and omission have sent the church we love, the church we serve and the church that Jesus Christ established into convulsions," he said. "Sadly, the disgrace not only is borne by the perpetrators, it hurts us all, as does the silence of shepherds who have ignored the cries of their flocks."

He praised the "many wonderful and faithful laborers" in the Lord's vineyard among the priests and bishops, but "it is clear that in addition to devastating criminal acts, we have seen many other moral failings by clergy that represent a crisis of commitment to the Gospel."

Anderson said that victims' needs too often "have been subordinated to a distorted sense of mercy toward the perpetrators or an instinct for clerical self-preservation."

"The sexual acts -- both criminal and non-criminal -- highlight the need to recover a respect for and a renewed commitment to the priestly promises of celibacy," he added.

He noted that the Knights of Columbus have supported the pastoral and charitable work of bishops and priests since the fraternal organization was founded by Fr. Michael McGivney. The Connecticut priest, who is a sainthood candidate and has been declared "venerable," started the Knights in 1882.

"We understand that the priest should lead the parish and the bishop should be the center of unity in a diocese," Anderson continued. "But we -- like all Catholics -- are painfully aware of the wreckage that ensues when elements of this leadership are abdicated by evil actions whether directly perpetrated or covered up."

Anderson outlines actions that should be taken on repentance, reform and rebuilding.

Repentance and a full accounting of misdeeds "will help increase the recognition that clerical sexual abuse is a global problem that must be addressed at the highest levels of the Catholic Church," he said.

"Moreover, priests and bishops who refuse to live according to their promises of celibacy should be removed from public ministry, not out of retribution, but for the protection of the faithful and to prevent future variations of the scandal we now suffer," he said.

As for reform, he said a lot of good ideas have already been proposed, including a lay-led independent investigation, complete transparency by the hierarchy and the expansion of the "zero tolerance" policy to include bishops.

But in addition, Anderson called for establishing "an independent ethics hotline for reporting of criminal and other conduct at odds with Catholic teaching on the clerical state of life; and there must be protections against retaliation."

"Such reforms will be difficult for a church largely unused to them, and we must support our bishops and our priests in embracing these reforms in order to rebuild," Anderson said

He said the Knights can help rebuild the church "in several ways."

"Above all else, Knights -- and our chaplains -- must embrace love of God and love of neighbor," Anderson said. "This is Christ's great commandment and the founding mission of our order. It is also exactly the opposite of the rejection of God and exploitation of neighbor that our church has witnessed in these scandals."

On a national level, he said, the Knights plan to have a novena of Masses in reparation " for the sins that have so grievously wounded the body of Christ" and urged local churches to offer such a Mass as soon as could be done. At the parish and family level, the Knights have a Building the Domestic Church program. "Imbuing families with faith and strengthening parish life are critical to rebuilding the church based on Gospel principles," Anderson said.

He also said the Knights plan to sponsor a national tour of the relic of the heart of the patron saint of priests, St. John Vianney. The tour will be organized with the cooperation of his shrine in Ars, France.

He asked all Knights "to stand steadfast" in their faith.

"We will assist priests, bishops and our fellow Catholics in helping the church chart a course for the future that puts Christ at the center, so that truly we may say, 'Thy will be done on earth as it is in heaven,'" Anderson said, "This is the moment in which Knights -- including in a special way our priest members -- can be part of a great renewal for good in our church."