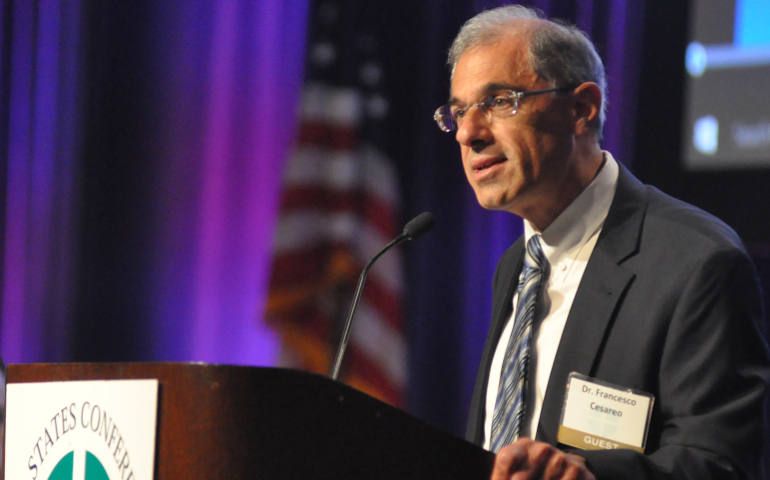 Francesco Cesareo, chairman of the National Review Board, speaks June 14 during the opening session of the U.S. Conference of Catholic Bishops' annual spring assembly in Indianapolis. (CNS photo/Sean Gallagher, The Criterion)

Washington — The 14th annual report on diocesan compliance with the U.S. Catholic Church's "Charter for the Protection of Children and Young People" shows that church leaders have taken steps to help many find healing as victims of clergy sexual abuse, but there is still work to be done.

Introductory remarks in the 2017 report urge church leaders not to assume that "sexual abuse of minors by the clergy is a thing of the past and a distant memory. Any allegation involving a current minor should remind the bishops that they must rededicate themselves each day to maintaining a level of vigilance," wrote Francesco Cesareo, chairman of the National Review Board, which oversees the audits.

Cesareo, who is president of Assumption College in Worcester, Massachusetts, reiterated that message June 14 at the bishops' spring meeting, held this year in Indianapolis. He reminded them that their commitment to stopping clergy sexual abuse and supporting victims of abuse must remain "at the forefront" of their ministry.

The newly released report — based on audits conducted between July 1, 2015, and June 30, 2016 — shows that 1,232 survivors of child sexual abuse by clergy came forward with 1,318 clerical abuse allegations in 132 Catholic dioceses and eparchies. The allegations represent reports of abuse that occurred from the 1940s to the present.

The report also shows an increase of 730 allegations from the previous year's report and stresses that a most of the increase in allegations this year comes from the six dioceses in Minnesota, because the state in 2013 opened its civil statute of limitations for such claims until May 2016, giving victims over age 24 a three-year window to sue for past abuse. These six dioceses reported 351 more allegations than they did in the 2015 audit year.

Deacon Bernie Nojadera, executive director of the U.S. bishops' Secretariat for Child and Youth Protection, said the audits show that even with all of the work being done to fulfill the requirements of the bishops' charter, developed in 2002, allegations involving current minors have still occurred.

In an introductory letter, he said he was grateful that allegations are being reported and "alleged victims are being treated with sensitivity and care" and that alleged offenders are offered treatment and supervision. "But much work is still needed," he said.

The report highlights that those abused by clergy at any point in their lives "should be heard with compassion and understanding and receive immediate pastoral care." It notes that all dioceses and eparchies audited have individuals available to listen to those who have been harmed by clergy or diocesan staff or personnel.

Cesareo said progress was made this year toward participation by all dioceses and eparchies in the audit process, but he similarly stressed that concerns raised by the report on the audits point to work that still needs to be done. At the bishops' meeting June 14, the review board chair said that the value of participating in the audit "can't be overemphasized."

Cardinal Daniel DiNardo of Galveston-Houston, president of the U.S. Conference of Catholic Bishops, likewise noted in an introduction to the report that the church cannot be complacent, stressing that after 15 years the church must "again recommit ourselves more than ever before to not only keeping but enhancing our promise to protect and pledge to heal."

DiNardo announced at the bishops' meeting the appointments of four new members to serve on the review board::

Cesareo will continue to chair the review board until his term expires in 2020.

The Center for Applied Research in the Apostolate, based at Georgetown University in Washington, gathers data for the report, and StoneBridge Business Partners, based in Rochester, New York, conducts the annual audits.

The annual report has two parts. The first is the compliance report of StoneBridge, which carried out on-site audits of dioceses and eparchies and reviewed diocesan documentation. Under canon law, dioceses and eparchies cannot be required to participate in the audit, but it is strongly recommended that they do.

The second part of the report is the "2016 Survey of Allegations and Costs," conducted by CARA.

The charter emphasizes that the first obligation of the church toward victims of sexual abuse is to offer outreach and provide a path toward healing and reconciliation. During the audit year, about 250 newly identified abuse victims and members of their families were offered support and similar care was provided to 1,510 abuse survivors and their families who reported abuse in previous years.

The other focus of the charter is to deal with allegations of abuse no matter when it occurred. All dioceses and eparchies that received an allegation of sexual abuse during the 2016 audit year reported them to the appropriate civil authorities. Included in that number are 25 new allegations from minors. As of June 30, 2016, two were substantiated, eight were still under investigation, and 11 were unsubstantiated or unable to be proved. Of the remaining four, two were referred to a religious order, one was referred to another diocese and one investigation was postponed because of an order of confidentiality from the bankruptcy court.

The report also points out that more than 2.4 million background checks on priests, church employees and volunteers is part of what all Catholic parishes and schools do. It also said more than 2.3 million adults and 4.2 million children have been trained on how to identify the warning signs of abuse and how to report those signs.

"Despite all the policies, procedures, codes of conduct, reports and training, unacceptable events still occurred," the report said, noting the 25 allegations made by minors that were reported to local civil authorities.

"Such allegations serve to remind us that we cannot become complacent. We must be ever vigilant in our parishes and schools. One act of abuse is one too many," it said.

It also said previous reports warned church leaders not to be complacent but that the 2017 report shows "complacency still remains an issue in some dioceses." It said the vast majority of dioceses have continued to improve their child protection methods, but others have only sought to meet the minimum standards required by the charter or the audit.

The report can be found at http://www.usccb.org/issues-and-action/child-and-youth-protection/upload/2016-Annual-Report.pdf.

Delaware DOJ opens review of files of clergy, other personnel in diocese