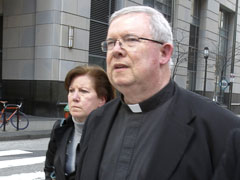 Msgr. William Lynn walks away from the courthouse after a hearing in Philadelphia March 14, 2011. (CNS/Reuters/Tim Shaffer)

The trial for the first church official charged with the cover-up of child sexual abuse is under way in Philadelphia, as jury selection began Feb. 21 for Msgr. William J. Lynn and two codefendants. Lynn faces charges of felony child endangerment and conspiracy.

Prosecutors allege the former archdiocesan secretary of clergy recommended parish assignments for the codefendants, Fr. James J. Brennan and former priest Edward Avery, that would place them in contact with children, knowing they had abused or been accused of abusing children in the past.

Brennan and Avery will stand alongside Lynn when the trial opens March 26. Both men face charges of molesting the same St. Jerome Parish altar boy on separate occasions.

All three have pleaded not guilty. The archdiocese, called an unindicted coconspirator by the prosecution, is covering Lynn’s legal fees.

Lynn, 60, is the first Roman Catholic official in the United States charged in the sex abuse scandal for administrative actions. As secretary of clergy for Cardinal Anthony Bevilacqua from 1992-2004, Lynn was responsible for making recommendations on priests’ assignments in the archdiocese, with his duties extending to investigating reports of priests sexually abusing children and recommending appropriate action. Bevilacqua died Jan. 31 at age 88, a day after the judge ruled him competent to testify in the case.

“The whole country is watching because it’s a key moment in the ongoing story about how the church handles child sex abuse,” said Marci Hamilton, who holds the Paul R. Verkuil Chair in Public Law at the Cardozo School of Law at New York’s Yeshiva University. Lynn’s case could push the focus beyond the perpetrator and to the systemic problems in the church, she said.

“I would really be surprised if [Lynn] were found to be not guilty. The evidence is compelling,” she said.

Hamilton, a leading church/state scholar and counsel in multiple sex abuse cases, said the prosecution’s case hinges on showing a pattern in the archdiocese of putting known clergy abusers of children in contact with other children.

To that end, the prosecution won a major pretrial victory when Common Pleas Court Judge M. Teresa Sarmina ruled they could tell jurors how the archdiocese handled 22 past cases of alleged abuse.

“Those cases will be a part of establishing that it wasn’t simply one oversight, it wasn’t an accident that the survivor that’s at the heart of the case against Msgr. Lynn was put into danger’s way,” Hamilton said. “It was actually just an ongoing practice that he was following over the years. ... It wasn’t an accident. It wasn’t an oversight. It was a system of covering up child sex abuse.”

Lynn’s lawyers have argued he exercised good judgment in his recommendations, and he had no authority to actually place priests in new assignments.

“Unfortunately for all the higher-ups in [Lynn’s] position, following orders is no defense to criminal behavior,” Hamilton remarked. “If someone chooses to put a pedophile in contact with further children, that’s a crime. That’s endangerment of children, whether someone told you to do it or not.”

Anticipating that Lynn could testify that he was following the advice of archdiocesan lawyers when he made his recommendations, Sarmina ordered the archdiocese to make available by the trial date all communications between its lawyers and Lynn that discuss the sexual abuse of minors. A videotaped deposition by Bevilacqua could provide insight into the extent of Lynn’s authority.

In another ruling, Sarmina, a trial judge with 14 years’ experience, denied Lynn’s attorneys’ motion for her recusal after they viewed her comments during a jury question review as partial. Responding to a question that would have asked jurors if they believed sex abuse of children was a widespread problem in the church, she said, “Anybody that doesn’t think there is widespread sexual abuse within the Catholic church is living on another planet.”

Should Lynn be convicted, the fallout could be profound, said Hamilton, who described a possible guilty verdict as a “tremendous vindication for the thousands of child sex abuse victims of priests around the country.”

As for its impact on other cases, she believes more victims would likely come forward across the country, and more high-ranking church officials would be at risk of prosecution “in areas where prosecutors are more interested in protecting children than they are in deferring to the hierarchy.”

A February 2011 grand jury report from District Attorney Seth Williams led to the two felony charges against Lynn. In the report, the grand jury expressed much frustration that little had changed within the archdiocese in terms of protecting children and holding accused priests accountable since a 2005 grand jury report into the abuse of minors within the Philadelphia church.

The 2011 grand jury said, “These are simply not the actions of an institution that is serious about ending sexual abuse of its children. There is no other conclusion.”

The 2011 report also led to the suspension of 29 priests alleged to have abused children pending further review by then-archbishop Cardinal Justin Rigali, who reopened cases of 34 accused priests at the urging of the grand jury.

The grand jury also recommended charges against Avery, Brennan, Salesian Fr. Charles Engelhardt and Catholic school teacher Bernard Shero. All have pleaded not guilty and face charges, among others, of rape, conspiracy, assault and endangering the welfare of children.

Though plans once set for all five defendants to stand trial together, only Lynn, Avery and Brennan remain. Both Engelhardt and Shero won bids for separate trials, with Engelhardt’s lawyer arguing on the grounds of his lack of connection with the archdiocese and membership in the independent religious order the Oblates of St. Francis de Sales. Both trials are tentatively set for Sept. 4.