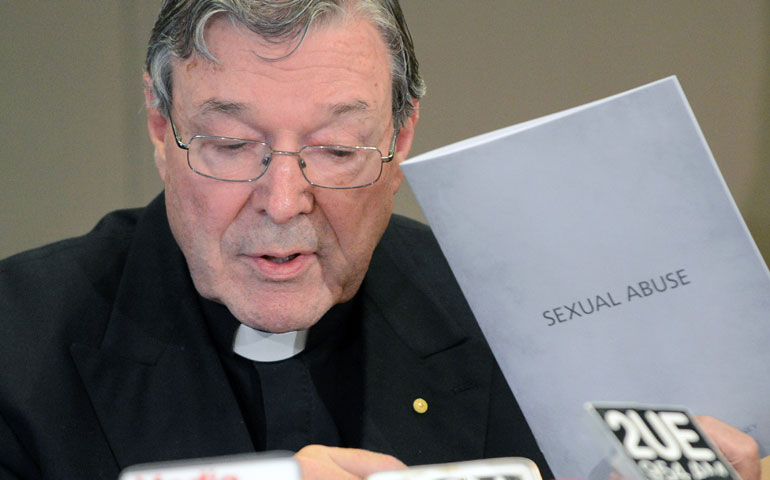 Cardinal George Pell of Sydney holds a copy of church protocols for dealing with sexual abuse during a Nov. 13 news conference responding to the Australian government’s establishment of a royal commission into child sexual abuse. (Newscom/Getty Images/AFP/Roslan Rahman)

The commission will look at a wide array of public and private institutions that serve youth, from schools and residential homes to the Boy and Girl Scouts, but the abuse of minors in the Catholic church is undeniably an impetus for the announcement.

The decision, taken at a meeting of the federal cabinet, has received overwhelming public support; 95 percent of Australians approve of the commission, according to a Herald-Nielsen opinion poll.

Pressure for a national royal commission has been mounting for years, led by abuse victims and some sections of the Australian media. Child sexual abuse is already the subject of an ongoing parliamentary inquiry in the state of Victoria, and in early November another inquiry was announced in the state of New South Wales.

Victims' advocates have warned that it may take up to 10 years to complete, and that thousands of people may want to give evidence about incidents of abuse that occurred as long ago as the 1930s. Up to half a million Australian children were in care during the last half century. Cardinal George Pell of Sydney provoked a furious backlash when he suggested pressure for the royal commission had been provoked by a one-sided media "smear" campaign against the Catholic church. He said abuse by Catholic clergy had been singled out and exaggerated, but he welcomed the royal commission as "an opportunity to clear the air, to separate fact from fiction."

Speaking at a news conference the day after the commission was announced, Pell said, "We are not interested in denying the extent of misdoing in the Catholic church. We object to it being exaggerated. We object to being described as the only cab on the rank."

In stark contrast, Australia's most senior Anglican bishop, Archbishop Phillip Aspinall of Brisbane, enthusiastically endorsed the commission, even revealing that he had lobbied for it 10 years ago.

Pell's ambivalence about the commission earned him criticism from other corners of Catholic Australia.

Retired Sydney Auxiliary Bishop Geoffrey Robinson, a former head of the church's national professional standards committee and himself a victim of child sexual abuse, described Pell as "an embarrassment to me and a lot of good Catholic people," and said that his response to the royal commission had been "a disaster for the Catholic church."

"He's not a team player, he never has been," Robinson said. "He's not consulting with anyone else, he's simply doing his own thing. I personally believe he's doing it very badly indeed and I think the other Australian bishops, as one of the very first questions they need to face, they've got to confront him and determine who it is that speaks in their name and who doesn't."

Opposition leader Tony Abbott, Australia's most prominent lay Catholic and a close associate of Pell's, also distanced himself from the cardinal's remarks.

More embarrassing for Pell has been the response of leading child protection expert Patrick Parkinson of the University of Sydney. The bishops hired Parkinson to provide an independent assessment of its national sexual abuse protocol, "Towards Healing," which was introduced in 1996 and has since been twice revised.

At his press conference, Pell invoked Parkinson's endorsement of "Towards Healing" as confirmation that the church had cleaned up its act and that any inadequacies in dealing with abuse allegations were all in the past.

However, the next day, Parkinson announced that he had withdrawn his endorsement of "Towards Healing" because the church was still failing to act against clergy who didn't comply.

He said he had reviewed "Towards Healing" in 2008 and 2009 and raised a number of concerns with the Australian bishops, specifically in relation to the activities of the Salesian order, which has been accused of moving predatory priests offshore to Samoa, where they continued to have contact with children. He said the bishops had suppressed his report and failed to act on his recommendations.

In October, Parkinson also gave evidence to Victoria's state parliamentary inquiry into sexual abuse that statistics for abuse committed by Catholic clergy were six times higher than for all the other churches combined, "and that's a conservative figure."

Two sets of events triggered the announcement of the national royal commission.

First were allegations of a cover-up of abuse by a priest of Armidale diocese known for legal reasons as "Father F." On Oct. 19, Father F was arrested and charged with 25 counts of child sexual abuse. He had been removed from active ministry in 1992 after being interviewed by three senior priests, but they failed to report his activities to police. They deny they were involved in a cover-up. The Catholic church has established its own internal inquiry into the matter, chaired by a federal court judge.

"I can testify from my own experience that the church covers up, silences victims, hinders police investigations, alerts offenders, destroys evidence and moves priests to protect the good name of the church," he said.

Fox alleged he was removed from his investigation after he obtained an explosive witness statement from a church insider alleging a high-level cover-up of abuse in the Maitland-Newcastle diocese.

It has been alleged that abuse in Maitland-Newcastle has been covered up by two successive bishops, Leo Clarke (who died in 2006) and Michael Malone (who succeeded him in 1995), and three successive vicars general, Msgr. Patrick Cotter (died 2007), Fr. Tom Brennan (died 2012), and the man who is currently archbishop of Adelaide, Philip Wilson.

Brennan was the first senior Australian Catholic clergyman to be charged over covering up abuse, but he died before the matter went to court.

The question now is what kind of royal commission this will be, how long it will take and what its terms of references are going to be. Gillard has given assurances that the details will be worked out in consultation with organizations representing survivors of abuse, with the churches, and all Australian states and territories.

Victims' advocates say the commission will need to be prepared to pursue lines of inquiry overseas if necessary and that its success will depend on its willingness to compel the production of documents and witnesses including bishops and archbishops to give evidence under oath. Pell said he would give evidence if called upon.

[Stephen Crittenden is arts, religion and culture writer for The Global Mail.]

More in this package:

Australians debate seal of confession in cases of sex offenses

Analysis: Response to abuse has been slow, stymied by Vatican

A version of this story appeared in the Dec 7-20, 2012 print issue under the headline: Australian commission to investigate abuse Sydney cardinal provokes backlash in citing media ‘smear’ campaign.