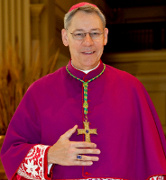 Finn's agreement with Clay County, Mo., announced today, also requires him to report monthly to the prosecutor to "apprise [the prosecutor] of any and all reported suspicions or alleged abuse activities involving minors" in the diocese's facilities in the county.

Today's agreement also waives the normal statute of limitations in the Ratigan case, allowing Clay County the option to press charges against Finn anytime in the next five years should the bishop fail to comply with the agreement's terms, according to a release this morning from Clay County prosecutor Daniel White.

Finn confirmed the agreement in a separate release, saying it "provides a structure for [the diocese] to maintain an open dialogue about any and all issues of abuse of minors."

As part of the agreement, Finn has also agreed to visit all of the parishes in Clay County with a yet to be hired diocesan director of child and youth protection and the diocesan ombudsman to outline the diocese's procedures for reporting suspected child abuse.

The new director of child and youth protection, Finn said in his release, will be designated "very soon" and will "coordinate the work" of the ombudsman, the diocesan victims' advocate, and the diocesan safe environment coordinator.

While the agreement between Finn and Clay County isn’t the first of its kind, it is rare. It is unique in that the diocese is obligated to notify the prosecutor's office of every report of potential abuse of a minor in the county.

White said in his release that Clay County's oversight of the diocese's reporting procedures ensures "there will be no layer of bureaucracy between a reporting party and the person making the investigation decisions."

“I believe this direct, independent and outside oversight coupled with the fact that we have the ability to file a misdemeanor charge in the next five years gives assurances to parents that the Diocese is serious about addressing this issue and continuing to enhance children protection efforts in Clay County,” said White.

Finn's agreement with Clay County, formally known as a "diversion compliance agreement," last from Nov. 15, 2011, to Nov. 15, 2016. The formal notice, which was obtained by NCR, bears the signatures of Finn, White, and Gerald Handley and James Hobbs, the bishop's attorneys.

White also announced today in a separate release that Ratigan had been indicted by a Clay County grand jury on three counts of possession of child pornography. The indictment supersedes a state criminal complaint that charged Ratigan on May 19. Each of the three counts is a felony punishable by up to seven years in prison.

Ratigan, 45, was also indicted in June by a federal grand jury and is in federal custody.

Ratigan, a diocesan priest, was arrested on charges of child pornography in May. The parish he was serving is in Clay County. The diocesan headquarters are in Jackson County.

While images of naked children on Ratigan's laptop were reported to and seen by the diocese last December, it did not report the incident to authorities, instead removing Ratigan from his parish, which is located in Clay County.

The agreement between Finn and Clay County comes after media reports that both the bishop and his vicar general, Msgr. Robert Murphy, had given testimony before a grand jury in the county regarding their handling of the Ratigan case in September.

Murphy has been at the center of allegations the diocese did not sufficiently respond to allegations that Raitgan's behavior around children were worrisome.

A diocesan-sponsored study of its handling of the Ratigan case released in September found that "individuals in positions of authority reacted to events in ways that could have jeopardized the safety of children in diocesan parishes, school, and families."

Specifically cited in the 138-page report, conducted by former U.S. attorney Todd Graves, is a letter given to Murphy by Julie Hess, the principal of the elementary school attached to the parish where Ratigan served.

A year before Ratigan's arrest, Hess hand-delivered to Murphy a letter warning that parents and staff members there were concerned about "significant red flags" about Ratigan's behavior and were worried he "fit the profile of a child predator."

The Survivors Network of Those Abused by Priests was quick to issue a negative reaction to news of the agreement between Finn and Clay County.

In their own press statement, the group wrote they were "disappointed" because "Finn has now done here what bishops have almost always done -- make any promises, payment or plea deal to avoid having to face tough questions in open court about their disgraceful and irresponsible deception."

"Catholics, citizens and children need and deserve the truth," writes Peter Isely, a member of the group's board of directors.

Other cases of agreements between dioceses' and prosecutors include: