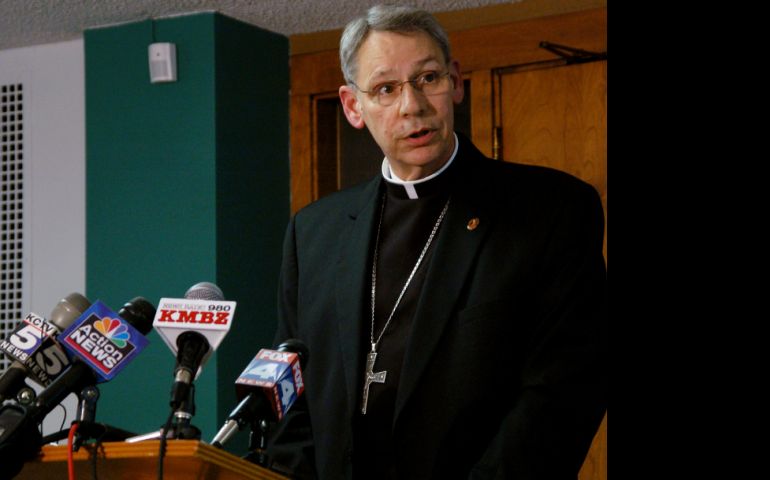 Kansas City, Mo. — One day after newspapers across the nation featured front page articles about a U.S. bishops' sponsored study on the causes of the clergy sex abuse scandal, which blamed much of the crisis on the sexual revolution of the 1960s, another clergy abuse news story was on the front page of The Kansas City Star: A local priest had been arrested for possession of child pornography.

To many, the most disturbing revelation in the story of Fr. Shawn Ratigan, 45, a priest in the Kansas City-St. Joseph diocese since 2004, was that diocesan officials knew his personal computer had been found last December to contain many photographs of young children, including at least one of a nude girl.

But they did not share the information with members of the diocese or its review board. Instead, Bishop Robert W. Finn moved the priest to a local home for religious sisters.

Even after the priest attempted suicide, the diocese kept the information surrounding his transfer secret.

The diocese went public about Ratigan's computer photographs last week after the priest was arrested by local police May 19 and charged with three counts of possessing child pornography.

Catholics throughout the diocese expressed shock and anger as the revelations spread. Even within the local chancery office the information was "devastating," according to one source.

At a May 20 session at the parish where Ratigan served as pastor for a year, Finn fielded questions from distraught parishioners. He revealed during the session that he had considered placing the priest, after learning of his troubles, at the diocesan archives so he could do work that "wouldn't put him in contact with children."

According to guidelines established by the U.S. bishops in their 2002 Charter for the Protection of Children and Young People, independent review boards in each diocese are to help the bishop "in his assessment of allegations of sexual abuse of minors."

But a member of the review board in the Kansas City diocese told NCR the group had never been notified of the Ratigan matter.

"We haven't been presented the case; we haven't been asked to look at the case," said Jim Caccamo, who serves on the board and said he first learned of the allegations against Ratigan after hearing news reports of his arrest.

"There's nothing normal about this," Caccamo said, referring to the delay between when the diocese first learned of Ratigan's possession of child pornography and the priest's arrest.

"My question will be: Why did it take five months?"

The process followed by officials in the Kansas City case appears to mirror in some ways that followed in Philadelphia, where a Feb. 10 grand jury report cited 37 priests as continuing in ministry in that archdiocese despite what were considered to be credible allegations of abuse.

Following that report, the former secretary of clergy in the archdiocese was arrested for failing to protect children from dangerous priests. Cardinal Justin Rigali also placed 21 other priests on administrative leave March 8 pending review of allegations of abuse.

The head of the Philadelphia review board has said that archdiocesan officials held back pertinent information from that board regarding the cases against priests in the archdiocese.

The Philadelphia board "had been advised only about allegations previously determined by archdiocesan officials to have involved the sexual abuse of a minor -- a determination we had been under the impression was ours to make," wrote Ana Maria Catanzaro in a May 12 article in Commonweal.

The Kansas City case, while involving only one priest, seems to reveal a pattern long associated with the clergy sex abuse scandal: Local bishops make the final decision regarding whom to notify when priests are accused of abuse or, as in the case of Ratigan, suspected of possessing child pornography.

A source inside the Kansas City diocesan chancery said people there first learned of Ratigan's arrest from the news report last Thursday. That person, who is familiar with the review board process, also said that the system has been "exposed as a sham."

"If they're not even given the information, then there's no point in having a review board at all," the person said. "We should just go right to the authorities."

According to a letter released from the Kansas City diocese late Friday afternoon, Finn said he first learned that a laptop computer owned by Ratigan contained "many images of female children," including one of an "unclothed child," in December. The bishop said that he described one of the images to a police officer and was told it "did not constitute child pornography."

A Kansas City police spokesman told the Star Friday that diocesan officials reached out to a ranking police officer who serves on a diocesan committee.

The spokesman said the officer was told there was a "single image of a young naked girl on a computer, nothing sexual in nature," and was not shown the photo or told there were other images.

After Ratigan attempted suicide Dec. 17, when emergency workers found him unconscious in his closed garage with his motorcycle running, Finn said he sent him "out of state" for psychiatric care, according to the letter.

When the priest returned to the diocese, Finn said in the letter that he sent him to a community of the Sisters of St. Francis of the Holy Eucharist with instructions to not attend or participate in events where children were present. Finn also said the priest "did not have his computer or his camera in his possession during this period."

Officers arrested Ratigan May 19. The priest is being held on $200,000 bond, with arraignment expected Monday.

The day after the first news accounts appeared in Kansas City, Finn visited the parish where Ratigan last served as pastor. Standing in the sanctuary alone at the lectern, Finn was grilled by outraged and disillusioned parish members.

For just under three hours Friday parishioners at St. Patrick's parish, where Ratigan had served for about a year, expressed outrage at Finn -- asking why the priest was not brought to the police when the diocese first knew of his troubles in December, and how parishioners could ever trust Finn, or even the Catholic church, again.

"I should have done differently in this regard and I'm sorry," admitted Finn at one point to the crowd of 300, which also included parents of children who attend the parish school, which Ratigan would visit frequently.

One after another -- mother after mother, father after father -- lined up to speak directly to Finn as he stood alone at the lectern next to the parish's altar. Many were in tears. Others were speaking at the top of their voices, almost without the words to express their anger.

One, a woman who identified herself as a member of the parish for over 10 years, recounted how she had seen Ratigan tickling young children at the school's daycare program.

"As soon as you knew what was going on, why the Hell didn't you tell me something?" she asked, her voice shaking.

"When a priest becomes our priest, he becomes a part of our family. And this family deserves to know what is going on in this church."

Earlier in the questioning, a man who identified himself as a teacher at the parish school asked whether there were any warning signs of Ratigan's predilection towards children, and if there were, why he was still assigned to a parish.

Finn replied, at first that "we did not have complaints before" and "we have a priest shortage in our diocese and we needed a pastor here."

"I personally regarded Fr. Shawn as a good choice," said Finn. "I thought that he had energy and enthusiasm and would be a person of integrity. I was wrong."

Continuing to answer the question, Finn surprised some in the audience by admitting that the diocese had been considering placing Ratigan at the diocesan archives after it had learned of the pornography on his computer.

"We were talking with Fr. Shawn more recently about having him come work in the archives at the chancery where he would be in an office setting," said Finn.

Finn added that he had been hearing confessions for 32 years and that "pornography is one of the most frequent epidemics in our culture and society." He said that fact didn't diminish "the damage done by Fr. Shawn," but that people of faith are inclined "to hope that people are salvageable."

Finn also said that when he assigned Ratigan to the Franciscan sisters residence, he told him he would never have a parish again because "even though he didn't have criminal activity, he had very significant problems."

Later, a woman who said she volunteered frequently for the parish's pro-life activities, told Finn she had been contacted by Ratigan as recently as two days before his arrest.

"Fr. Shawn told us that he was totally cleared," she said. "All to find out that this investigation has been going on since December. I feel like I've been violated. What can you do now to help St. Patrick's heal?"