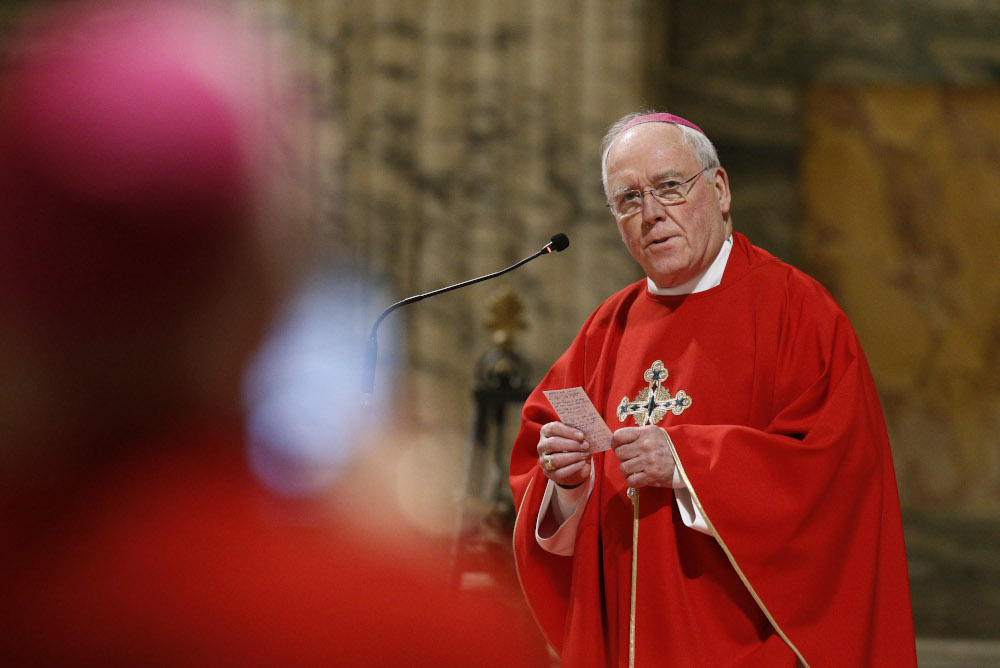 Bishop Richard Malone of Buffalo gives the homily as he concelebrates Mass with other U.S. bishops from the state of New York at the Basilica of St. Paul Outside the Walls in Rome Nov. 12. (CNS/Paul Haring)

Editor's note: This story was updated with new information at 12.30 p.m. Eastern time.

Buffalo Bishop Richard J. Malone told Catholics Dec. 4 he asked Pope Francis to allow him to retire early so the people of the diocese "will be better served" by a new bishop who is "perhaps better able" to bring about "reconciliation, healing and renewal" in addressing the abuse crisis.

In a three-page letter, he said that "despite the measurable progress we have achieved together," he made his decision "after much prayer and discernment." The "spiritual welfare" of the faithful will be better served by a new bishop.

At 73, Malone is two years shy of the age at which bishops are required by canon law to turn in their resignation to the pope.

For more than a year, he has faced questions about how he has addressed the clergy sex abuse crisis, particularly a situation involving two priests' relationship with a seminarian that he has called "a very complex, convoluted matter."

Malone has headed the Diocese of Buffalo since 2012. Pope Benedict XVI named him the 14th bishop of Buffalo May 29, 2012, and he was installed in August of that year. Scharfenberger, 71, has headed the Albany Diocese since 2014. In his five and a half years in Albany, he has been a national leader in responding to the clergy abuse crisis. 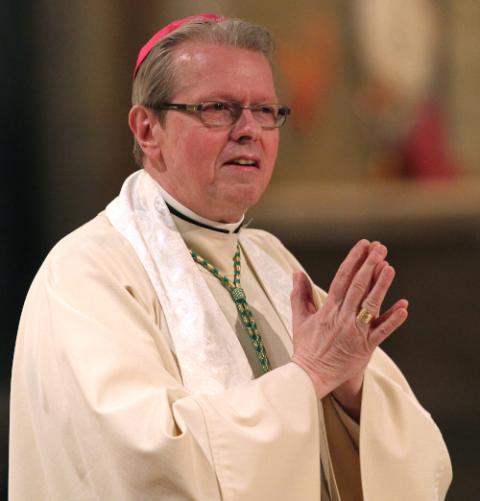 "My family just expanded and we have 600,000 wonderful Catholics (in the Diocese of Buffalo.) It's a very wonderful Catholic diocese," Scharfenberger said in an interview with The Evangelist, Albany's diocesan newspaper. "I want to do a lot of listening and I want everybody to feel that they do have my ear. I don't want anyone to feel excluded."

"I am very well aware that there has been a lot of hurt and polarization and trust breaches," he added. "We only have one healer and that is Jesus, and we are going to turn everything into his hands and trust that he will guide the way."

Scharfenberger said he plans to visit the Diocese of Buffalo in western New York weekly. As for how long he could be in the dual role, he said: "I have no idea ... these things can take over a year. I know it will be a high priority to find the right successor."

In his letter, Malone referred to the apostolic visitation the Vatican had assigned Bishop Nicholas DiMarzio of Brooklyn, New York, to conduct in October. When the visitation was announced, Malone welcomed it.

On Oct. 31, the Brooklyn Diocese announced completion of the visitation and said DiMarzio had submitted his report to the Congregation for Bishops. It has not been made public.

"Inevitably some will surmise that my decision" is the result of this visitation, Malone wrote. "While I was made aware of the general conclusions of the report, which were a factor in my discernment, my decision to retire early was made freely and voluntarily" and reached "after honest reflection" and with " a deep and abiding commitment" to the best interests of the church in western New York.

Malone did not share details of what the report contained in his letter.

"This has been a difficult period in the life of the church in Buffalo. Throughout this process, the lay faithful, religious and clergy were in my prayers," DiMarzio said in a Dec. 4 statement.

At the Vatican's direction, he said, the visitation was thorough, "conducted with urgency" and carried out with "the good of the people of the Diocese of Buffalo" being the foremost consideration. More than 80 people were interviewed over a period of several weeks "to gather information for this administrative review," he said.

"What I found are many deeply devoted Catholics who love their church. I pray this moment of suffering and pain will lead to a birth of new faith," he added, saying he is confident Buffalo Catholics "are in good hands" with Scharfenberger overseeing the diocese.

"I hope that now Catholics in Buffalo can begin the process of moving forward, healing and helping the diocese in all of its ministries," DiMarzio said. "We extend a promise of prayer for Bishop Richard Malone, as he moves into the retirement phase of his episcopal ministry, and for the faithful of Buffalo."

Malone said in his letter that some have attributed the Buffalo Diocese's turmoil "to my own shortcomings." "But the turmoil also reflects the culmination of systemic failings over many years in the worldwide handling of sexual abuse of minors by members of the clergy."

"The crisis our church is facing relates not only to the immoral and criminal acts of those who committed unconscionable offenses toward the most vulnerable," he said, "but also to the failure to regard these violations as grave offenses that warranted the full weight of civil and ecclesiastical justice."

Much has been accomplished in addressing the abuse crisis by the U.S. Conference of Catholic Bishops since passage of the "Charter for the Protection of Children and Young People" in 2002, but "injury caused by past abuse continues to bring immense suffering around the world and here in our diocese," Malone said.

"I have met with many survivors of child sexual abuse and felt deeply their anguish, which words and gestures alone are inadequate to soothe," he said, and he has acknowledged on "many occasions the mistakes I have made in not addressing more swiftly personnel issues that, in my view, required time to sort out complex details pertaining to behavior between adults."

The Diocese of Buffalo, too, has "made much progress" in many areas including accountability and ensuring safe environments, but in listening sessions he has held across the diocese, he said, "I have heard your dismay and rightful concerns."

"I have been personally affected by the hurt and disappointment you have expressed, all of which have informed our actions. I have sought your understanding, your advice, your patience and your forgiveness," he said.