A Chilean cardinal and member of Pope Francis' advisory Council of Cardinals has sent a letter to the presidents of various Latin American bishops' conferences to rebut media reports that the pope's visit to Chile in January was a failure. 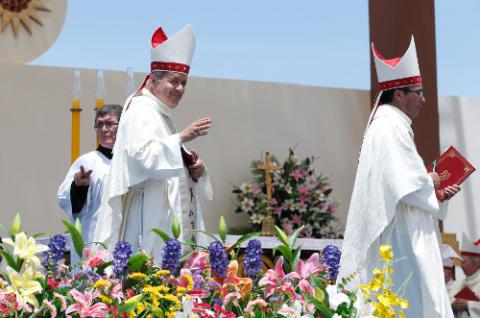 Cardinal Francisco Errázuriz Ossa, the retired archbishop of the Chilean capital of Santiago, blamed some of the poor press coverage of the visit on the actions of Bishop Juan Barros Madrid, who has been accused of covering-up sexual abuse perpetrated by a fellow priest in the 1980s and '90s.

In a five-page recounting of Francis' Jan. 15-18 trip, obtained by NCR, Errázuriz said Barros made himself available for interviews with journalists after concelebrating at Masses with Francis along with other Chilean bishops.

The controversial bishop, Errázuriz said, "did not perceive the magnitude of the problem."

"He did not avoid group interviews," he said. "He gave the impression that he considered them a favorable opportunity to spread his vision of things and to defend himself against the accusations."

"This ... created an undesirable and parallel focus to the Holy Father's visit, which diverted attention," Errázuriz said in the letter, which is dated Feb. 22.

Barros, who served as the head of Chile's military diocese until Francis moved him to the small southern city of Osorno in 2015, has been accused of protecting Fr. Fernando Karadima, who was sentenced by the Vatican to a life of prayer and penance in 2011.

Though Barros was not implicated in Karadima's canonical trial, victims say the bishop destroyed incriminating correspondence from the priest. At least three victims claim Barros was even a witness to some of the sexual abuse.

Francis was criticized for defending Barros while in Chile. He called the charges against the bishop "calumny," and repeated the claim during the press conference on his flight home.

After returning to Rome, however, the pope sent one of the church's most respected experts in clergy sexual abuse, Maltese Archbishop Charles Scicluna, to look into the accusations against Barros. Scicluna was in Chile during the last week of February to meet with victims and take testimony.

Errázuriz, one of only two Latin Americans chosen by Francis to be a part of the nine-member Council of Cardinals, also said in his letter that Francis' visit "demonstrated a weakness" of the Chilean bishops' conference.

The cardinal, who led the Santiago archdiocese from 1998-2010, said the conference did not make sure that the bishops accompanying the pope on his visit had a qualified spokesperson to handle press inquiries.

"We were accompanied by a young and valuable journalist, but without the career experience and authority required to dialogue with journalists and news agencies," Errázuriz said.

Referring to the late ex-director of the Vatican press office, he continued: "A [Joaquin] Navarro Valls was needed, capable of restraining journalists with good manners, telling them that the Bishop of Osorno would not give more interviews, because the center of the visit of the Supreme Pontiff was in his person, his gestures and his messages, and not in side episodes."

Errázuriz began his letter to the Latin American bishops' conference presidents by saying he had been "baffled and hurt" to receive questions from some priests about Francis' trip to Chile, and to watch "as numerous media reported in their countries that the visit had been a failure."

He said the pope was received by Chileans "with great enthusiasm and admiration," despite "a cloud [that] cast a shadow over the visit." Errázuriz also said he sent a report about the visit to the vice president of the Pontifical Commission for Latin America, Uruguayan layman Guzmán Carriquiry.