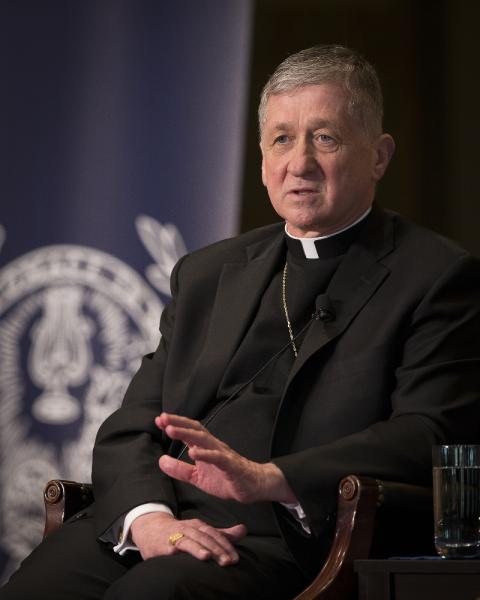 "Sorrow, disgust, outrage — these are righteous feelings" for all to have in reaction to the latest abuse scandal in the Catholic Church, Cardinal Blase Cupich said in an Aug. 17 statement.

These are "the stirrings of the conscience of a people scandalized by the terrible reality that too many of the men who promised to protect their children, and strengthen their faith, have been responsible for wounding both," he said.

His comments came in reaction to the Pennsylvania attorney general's Aug. 14 release of a grand jury report detailing seven decades of child sex abuse claims in six Pennsylvania dioceses. Some weeks before that were the allegations against Archbishop Theodore McCarrick that he abused a minor more than 47 years ago and was sexually inappropriate with seminarians.

"Anger, shock, grief, shame," said Cupich, who was chairman of the U.S. bishops' Committee on the Protection of Children and Young People 2008 to 2011 when he was bishop of Rapid City, South Dakota. "What other words can we summon to describe the experience of learning about the devastating revelations of sexual abuse — and the failures of bishops to safeguard the children entrusted to their care."

He described the grand jury report as a "catalog of horrors" that came on "the heels of news accounts of deeply disturbing sexual abuse and harassment allegations" against McCarrick.

"And yet whatever words we may use to describe the anguish of reading about these heinous acts, they can never capture the reality of suffering endured by victims of sexual abuse, suffering compounded by the woeful responses of bishops who failed to protect the people they were ordained to serve."

He quoted a written Vatican statement issued Aug. 16 by Greg Burke, head of the Vatican press office: "The church must learn hard lessons from its past, and there should be accountability for both abusers and those who permitted abuse to occur."

"I know that many of you are asking: How could this be happening again?" Cupich continued. "Didn't the U.S. bishops address this crisis sixteen years ago when they met in Dallas? What are they doing now, and why should we trust that this time they will do the right thing? These are precisely the questions that ought to be asked."

As a former chair of the child protection committee, "I have asked them myself."

He credited the "admirable work" of many in the news media who played "an essential role in bringing this crisis into the light."

"Now, we have been made to face these scandals first and foremost by the courage of victim-survivors — the men and women who found the strength, even when doing so meant suffering again unimaginable pain, to come forward and seek justice from an institution that grievously failed them," the cardinal said.

He reviewed the statement made Aug. 16 by Cardinal Daniel DiNardo of Galveston-Houston as president of the U.S. Conference of Catholic Bishops. DiNardo announced three key goals and a comprehensive plan to address the "moral catastrophe" of the scandal. He said the "substantial involvement of the laity" from law enforcement, psychology and other disciplines will be essential to this process.

The goals are: A "full investigation" into "the questions surrounding" McCarrick; the opening of new and confidential channels for reporting complaints against bishops; and advocacy for more effective resolution of future complaints. Three criteria, he said, will be followed: proper independence, sufficient authority and substantial leadership by laity."

Cupich said he and his brother bishops "must resolve to face our failures and hold each other accountable."

"We must resolve to be clear-eyed about what we have done, what we have failed to do and what remains to be done," the cardinal said. "We must resolve to live in the light of humility, of repentance, of honesty — the light of Christ. As your bishop, I pledge to continue holding firm to that resolve. And I ask for you to pray for all victims of abuse."

In Philadelphia, Archbishop Charles Chaput addressed the release of the grand jury report in a column posted Aug. 17.

He said it had been "an ugly week: first for the survivors of sex abuse; second, for Catholics across the state; third, for the wider public. For many, rage is the emotion of choice. The latest grand jury report is a bitterly painful text.

"But rage risks wounding the innocent along with the guilty, and it rarely accomplishes anything good," he said.

He recalled the anger Philadelphians felt toward the archdiocese after the 2005 and 2011 grand jury reports, calling it "well placed and justified."

"We've worked hard to remember the lessons of that time. Seven years later, we are keenly aware of the evil that sexual abuse victims have suffered. We understand our obligation, and we're sincerely committed, to help survivors heal," Chaput said.

"We've worked hard to ensure the safety of children and families in church-related environments. In that task, the guidance and counsel of laypeople — including former law enforcement officials and professionals in assisting abuse survivors — have been especially valuable."

He added: "We know that rebuilding the trust of our people and the morale of our good priests can only be accomplished with a record of doing the right thing over time. The roughly 100,000 laypeople and clergy we've trained in recent years to recognize and report the signs of sexual abuse are part of that effort.

Chaput said that as a member of the U.S. bishops' Executive Committee, "I support Cardinal DiNardo's leadership on these difficult issues," and he included in his column the full text of the cardinal's Aug. 16 letter.

In the Midwest, Archbishop Michael Jackels of Dubuque, Iowa, echoed the same strong sentiments as Cupich and Chaput.

"Overwhelmed. Disheartened. Ashamed. And at a loss as to an adequate response," he said in an Aug. 13 statement. "Those are some of my reactions to recent accounts of … sexual abuse of children, young people, and vulnerable adults, perpetrated by the likes of team doctors, coaches, and clergy, here in the USA and elsewhere ... the failure of people in charge, especially bishops, to hear accusers, to act on allegations, and to remove those who are predators from access to potential victims."

He also said he felt the need "to state that the vast majority is good and faithful, and does so much to help us on the way to heaven. Thanks be to God. Moreover, I feel the need to state that there is nothing inherent in an all-male clergy, or mandatory celibacy, or diocesan priests living alone that is the cause of this problem."

He said he looked forward to the bishops' full discussion on the abuse crisis at their November meeting and he urged laypeople "to be a partner in this effort" prevent abuse and create safe environments.

He also listed other actions including prayer for conversion, penance to make amends for past sins, affirmation of church teaching "about the human person, sexuality, marriage and family" and being "vigilant."