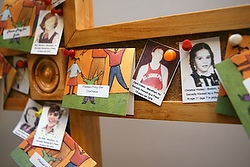 A cross outside the U.S. bishops' Office of Child and Youth Protection is covered with photos and prayers for the victims of clergy sexual abuse. (CNS photo/Nancy Wiechec)

Costs related to sexual abuse also increased in 2010 by more than $19 million to $70.4 million, most of which (57 percent) was spent on settlements with sex abuse victims.

Meanwhile, audits of local dioceses conducted by the Boston-based Gavin Group found “weaknesses in audit compliance,” the bishops conference said, including 55 dioceses that could be considered noncompliant if changes are not made.

In those dioceses, auditors found problems with church-recommended “safe environment” programs and inadequate training for children, pastors, or directors of religious education. Two dioceses—Lincoln, Neb. and Baker, Ore.—refused to cooperate with the auditors at all.

The “Charter for the Protection of Children and Young People” adopted by the bishops in 2002 calls for the education policies and the annual audits, which are not mandatory, though 188 dioceses participated last year. The bishops plan to review the charter in June.

The value of the audits have been questioned since a February grand jury report accused the Archdiocese of Philadelphia, which had been found in compliance by auditors, of failing to remove 37 accused priests from ministry.

Victims’ advocates accused the bishops of “breaking their own promises.”

“After a decade or more of promises, bishops are still refusing to abide by their own vague, weak policies adopted largely as public relations moves,” said Barbara Blaine of Chicago, president of the Survivors Network of Those Abused by Priests.