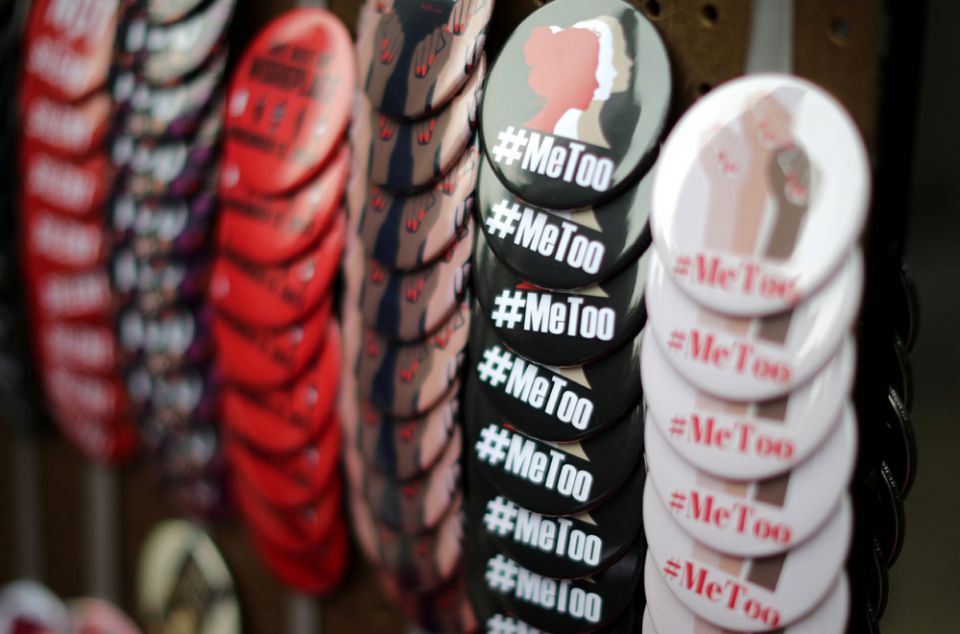 This September Donna Provencher will give birth to her second child. A few weeks after that, she may be appearing in court to defend herself in a defamation lawsuit that she sees as backlash for her speaking out about rape on a Catholic college campus.

"It's really terrifying," Provencher said of the suit, which is asking for $25,000 in damages plus fees and court costs — more than the single mother makes in a year. She has had to crowdfund to raise money for an attorney.

She sees the lawsuit as part of a broader pushback against the Catholic #MeToo movement, in which women from Catholic schools and organizations have come forward with allegations of sexual assault and of mishandling of their allegations.

"Even from day one, a disproportionate number of people have been making incredibly ugly comments about rape victims: defending the school, questioning rape victims' mental health, questioning their credibility," Provencher said about allegations of sexual assault and administrative inaction at Christendom College, a small Catholic school in Front Royal, Virginia.

"I didn't expect standing up for rape victims to be a controversial position."
—Donna Provencher

DisHonorRoll is made possible through a grant from the Media Consortium.

The public bullying and harassment got worse as more victims came forward, she said.

"It was astounding just how angry people were — not that [sexual assault] had occurred, but that someone dared to expose it," she said. "I didn't expect standing up for rape victims to be a controversial position."

Provencher is a leader of a support and advocacy group for Christendom women who say they were sexually assaulted and who are calling for the traditionalist school to adopt Title IX or similar protections. Because the school does not accept any federal funding, it is not required to follow Title IX regulations, the federal law that mandates procedures for handling complaints of sexual discrimination, harassment or violence.

The group, originally called Christendom Advocacy and Support Coalition, or CASC, when it was founded last winter, has broadened its mission to include other Catholic schools and renamed itself "Dinah's Voice" (after the Genesis story of Jacob's daughter who was raped but defended by her family). Christendom Advocacy and Support Coalition is now a project of Dinah's Voice.

Retaliation against the group and its individual leaders has included attacks on social media, especially on a blog called "Truth Exists/CASC Exposed," a cease-and-desist letter from another university, and now the lawsuit.

In March, Joseph Mazzara, a Christendom graduate and judge advocate in the Marine Corps, sued Provencher for what he says are false allegations of sexual assault against him, made in January in a Facebook comment in which she mentioned his name, among others.

Provencher said she was only defending sexual assault victims against attacks of false accusations and repeating an earlier comment by someone who had knowledge of an incident involving Mazzara.* That person's post — and others — were removed by the page's administrator, she said.

"I never stated that any of these men were guilty of a crime or sexual assault," said Provencher, who is director of communications for Dinah's Voice, and although a rape survivor, did not experience sexual assault at Christendom. 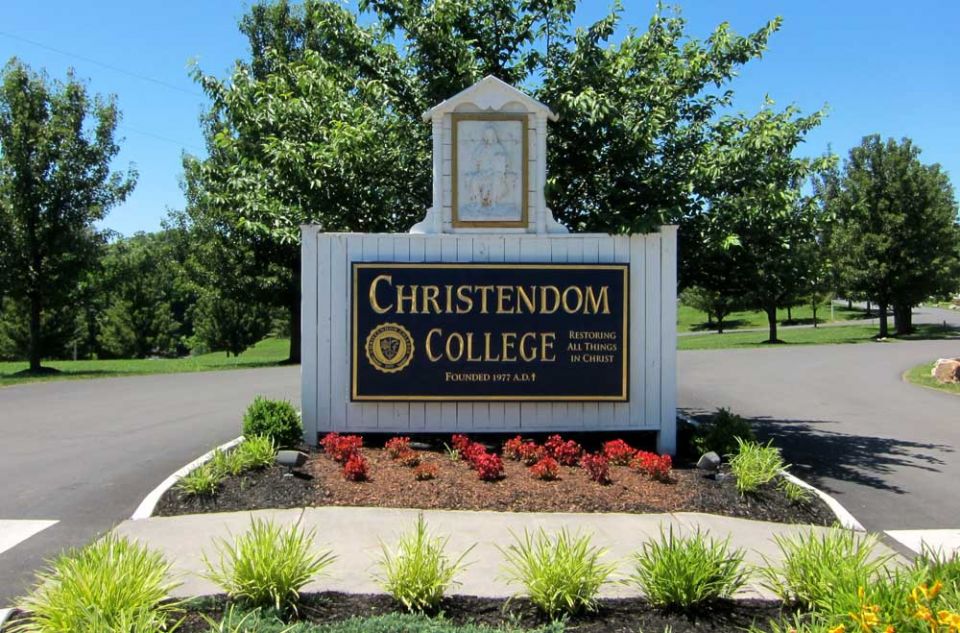 "It was more of a broader, sociocultural comment of 'Why are we always siding with the men in any kind of allegation of campus rape? Why are we defaulting to that, instead of giving the victims the benefit of the doubt?' " she told NCR.

In his complaint, filed in Virginia on March 12, Mazzara maintains that he never committed a rape and/or sexual assault during his time at Christendom, nor was he ever accused of or investigated for such a crime. He also claims that Provencher knew Mazzara was not guilty and that she acted negligently or with malice and a desire to injure him.

From the beginning, those who opposed Christendom Advocacy and Support Coalition have threatened retaliatory lawsuits, say Provencher and other victims and advocates.

Adele Chapline Smith, Dinah's Voice executive director, also has been on the receiving end of legal action for her work with the organization. In June, attorneys representing Ave Maria University in Florida sent Smith a letter about a Dinah's Voice blog post titled "Fighting rape culture is our business."

The letter threatened legal action unless the blog post was removed, alleging Smith made "reckless" and "unsubstantiated claims" about an "unproven allegation" of sexual assault at Ave Maria.

Dinah's Voice decided to remove the blog post, which at that point had been viewed 33 times, Smith said. She said many of the allegations in the letter were false, but that she did not have time to get legal advice and couldn't afford a lawsuit.

"It's appalling," Smith said of the backlash from "people who would rather fight us than make their schools safer places. Our crime is that we're trying to get these schools to be more accountable."

Smith said she was surprised by the cease-and-desist letter because her blog post merely repeated news from another blog about a former Ave Maria faculty member suing the school for allegedly reporting a colleague's "scandalous" behavior. That report is still posted online.

Much of the connection among victims — and the retaliation — has happened online, with critics of the victims' group, including a former Christendom employee, regularly capturing screenshots of members' words and sharing them elsewhere.

While it started on the Christendom alumni Facebook group, those moderators eventually quieted discussion about the issue of sexual assault there. That's when a few alumni began the Truth Exists/CASC Exposed blog, where they argue that CASC members are "advocates of mob justice."

They allege that because CASC (now Dinah's Voice) advocates to "believe women," the group "rejects due process and the presumption of innocence" and instead "believe[s] that the accused is guilty until he proves his innocence." In addition, the group "doesn't actually know what 'rape' or 'consent' mean," and therefore "is not a credible advocate for rape victims."

Provencher said the blog writers — who remain anonymous but say they are alumni and friends of Christendom, though in no way affiliated with the university — have attacked her personally and misinterpreted things she has written.

"Anything we have ever said in a public forum ... is twisted and used against us," she said.

Other examples of retaliation against Catholic victims and advocates include:

After NCR published two stories this spring about women's experiences of sexual assault at Franciscan University of Steubenville in Steubenville, Ohio, and Christendom College in Front Royal, Virginia, several media outlets, including Crisis magazine, incorrectly reported that funding for the stories came from an organization supported by George Soros' Open Society Foundation.

NCR had already begun the reporting on these stories when we learned that an association of independent media to which NCR belongs, The Media Consortium, had received a grant to fund reporting projects with "consistent, powerful storytelling that puts a human face on campus sexual violence." The staff of another consortium member, Bitch Media, a journal of feminist thought and culture, administered the funds and project, which they titled the "#DisHonorRoll."

We informed the consortium and the fund administrators of the stories we had in progress and they agreed to send us two grants, $150 and $500, to offset some of our reporting expenses.

Jo Ellen Green Kaiser, the executive director of The Media Consortium, told us that the funding for this project came via the Foundation for National Progress and that the consortium had received funds from the Open Society Foundation in 2009-2010, but none before or since.

A full list of outlets that have published stories in the #DisHonorRoll project is here.

For victims of sexual assault, "retaliation in some form or another is ubiquitous," said Hilary Jerome Scarsella, a theology doctoral student at Vanderbilt University in Nashville, Tennessee, who works with Into Account, which supports victims of sexual violence in Christian contexts.

Sexual violence victims can experience retraumatization, whose effects can be more severe than the original assault itself, Scarsella said. This is especially the case when retaliation occurs in a survivor's own community of support — such as a church or a school.

Both sexual violence and retaliation are attacks on the person's character, she said. "It disintegrates a survivor's sense of self. And if that dynamic infiltrates one's community, the retraumatization can be damaging and have a lasting effect."

Smith said that's why the Dinah's Voice support group is so important, "so no one ends up feeling alone as their character is being assaulted and maligned," she said. "It's psychologically exhausting."

The bullying and threats have not stopped the advocacy group, however, although its members have been more cautious.

An idea to protest at Christendom's May graduation, where Supreme Court Justice Clarence Thomas — himself a prominent subject of a sexual harassment accusation — was honored and gave the commencement address, was put on hold.

"We were all really scared," recalled Provencher of the decision to be "judicious" about what to say or do around graduation. "The ongoing cyberbullying and harassment had really peaked at that time."

But Dinah's Voice will not be silenced, say its leaders, and plans are underway to host a conference on Catholic feminism geared toward alumni of Catholic schools.

"I'm not going to let them stop us,' said Smith. "There are bigger things at stake. We're fighting for something that's really important."

Meanwhile, Provencher prays the lawsuit against her is dismissed or dropped. "I want the drama of all this to be far away," she said. "Then I can do my thing and speak up for victims."

*This sentence has been changed to clarify the source of the comment Provencher repeated.
**An earlier version of this sentence incorrectly stated that this CASC member was studying to become a therapist.

A version of this story appeared in the July 27-Aug 9, 2018 print issue under the headline: Catholic #MeToo victims and advocates face backlash .