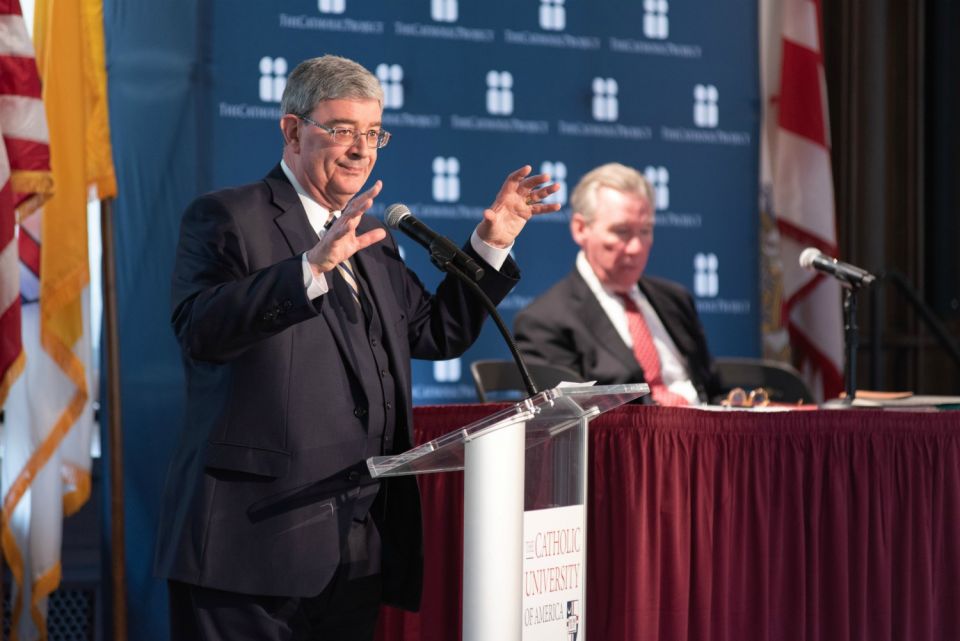 Washington — Two well-known lay Catholic leaders in the United States presented strikingly different opinions on the cause of the clergy sex abuse crisis, the role of the laity and the centrality of victim-survivors at an April 25 conference at Catholic University of America, titled "The Way Forward: Principles for Effective Lay Action."

The day-long conference, the fourth and final installment of the "Healing the Breach of Trust" series, was marked by the divergent 25-minute presentations of George Weigel and John Carr, who spoke at different points in the day.

Weigel, a biographer of Pope John Paul II and senior fellow at the Ethics and Public Policy Center, a conservative think tank in Washington, D.C., discussed the negative influence of Satan, the sexual revolution and mass media on the current crisis.

Carr, the founder and director of the Initiative on Catholic Social Thought and Public Life at Georgetown University and former director of the Department of Justice, Peace, and Human Development at the U.S. bishops' conference, presented 10 lessons on dealing with clergy abuse he gained from personal experience as both a victim-survivor and in working with the bishops.

Carr, who spoke before Weigel, emphasized the importance of unity in coming through the crisis.

"We should resist the temptation to use this crisis to score points to advance our own objectives," he said. "A crisis this deep, this profound, should lead us to challenge our assumptions, not just repeat them."

Carr also warned Catholics to beware of those who seek to advance their own ideological priorities, both right and left, whether through blaming homosexuality, Vatican II or priestly celibacy for the crisis.

"We should talk about all of these things, but none of these things — nothing about the sexual revolution — gave priests permission to abuse the young and vulnerable," he said.

For his part, Weigel echoed what Pope Benedict XVI wrote in a recent letter, crediting clergy abusive behavior between the 1960s and 1980s to "a meltdown of doctrinal moral discipline" that left some members of the clergy vulnerable to "the tsunami of the sexual revolution."

"It is essential for all of us, whatever our station of life in the church, to recognize how a culture of dissent in the church from settled Catholic teaching damaged the Catholic ecosystem from which a spike in abusive clergy behavior between the late 1960s and late 1980s occurred," he said.

Weigel noted that he made this same point in his 2002 book The Courage to Be Catholic in the wake of the revelations of abuse in Boston.

Weigel criticized the reaction of "at least one side of the spectrum after the pope emeritus' notes were published." He said that "those who refuse to even discuss this label themselves unserious about solving the problem of clerical sexual abuse."

Conceding that the sexual revolution does not account for the abuse committed by "psychopaths like Marcial Maciel or Theodore McCarrick," Weigel instead suggested that those two men may have been "demonically oppressed."

He also reluctantly admitted that he is absolutely convinced "Satan is a reality and the 'evil one' has attacked the Catholic Church in the United States at precisely the moment when the first fruits in the past 35 years of effort to build what John Paul II called the 'new evangelization' were beginning to be seen."

Weigel's rooting of the crisis in the sexual revolution was contradicted in an earlier presentation by Teresa Sullivan, the president emerita of the University of Virginia. Sullivan, who spoke on organizational principles for addressing the crisis, called for a rejection of historicity — the view that the crisis can be explained by and limited to a particular moment in history. This perspective, she said, allows people to claim the crisis was in the past but now under control.

"That usually means the crisis has been hijacked by someone's political agenda," she said.

Sullivan also rejected excusing clergy abuse with the notion that sexual abuse is "happening everywhere" because, although abuse definitely does take place in other institutions, "the church is special in terms of its moral authority."

"Reestablishing moral authority is important for the church to carry out its mission," she said.

Both Carr and Weigel agreed that the sex abuse crisis is not the entire story of the Catholic Church in the United States. Carr said, "We need to remind people that we are more than our failures, more than our worst mistakes," and listed homeless shelters and high quality Catholic education as examples of good work the church is doing. Weigel also called for a "balanced view of the contemporary Catholic reality" and highlighted deeply committed seminarians and thousands of newly confirmed Catholics as evidence of the "new evangelization" at work. 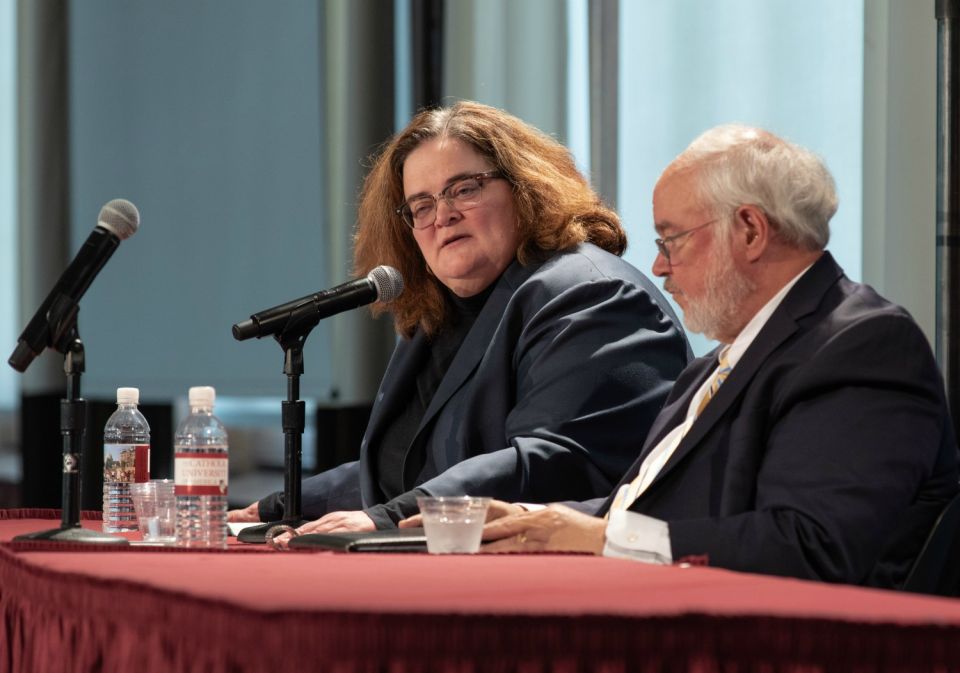 Teresa Pitt Green, director of Spit Fire Restorative Justice, and John Carr, director of the Initiative on Catholic Social Thought and Public Life at Georgetown University, spoke at the April 25 event. Both speakers are victim-survivors of clergy sexual abuse. (The Catholic University of America/Deirdre McQuade)

While Carr insisted on the need for the church to own its failures and apologize to victims, Weigel passionately denounced the condemnation of the entire presbyterate for the crimes of "four percent of its membership" and called on lay people to thank priests for their service — who, he said, may become subject to "real persecution" if "things continue to unravel in our culture."

Weigel also called on Catholics to hold a "healthy skepticism" of the mass media's portrayal of the Catholic Church. He particularly expressed disdain for Pennsylvania Attorney General Josh Shapiro and the Pennsylvania Grand Jury Report released August 2018. Weigel said the report deliberately misrepresented the church as having a "rape culture" by "telescoping 80 years of data." He questioned why there was no grand jury report into Pennsylvania public schools despite "hundreds of credible allegations" since 2002.

"The sexual abuse of vulnerable people — be they young, middle aged, or old — is a plague throughout all of society," Weigel said. "Despite what the attorney general of Pennsylvania appears unwilling to acknowledge, the Catholic Church has actually learned some things about how to deal with that over the last 17 years."

In line with his aversion to the Pennsylvania Grand Jury Report, Weigel proposed that bishops establish "a lay body of retired eminent jurists and legal authorities" to review grand jury reports as they come out. This was one example of lay collaboration with the episcopate Weigel listed in his talk, along with consulting clergy on the assessment of "possible candidates for the episcopate," nurturing "intensified prayer and penance," and bringing "someone into or back to the church."

Carr also expressed a desire for increased lay involvement in institutional matters, however he differed from Weigel by stressing the importance of including diverse voices.

"I'm afraid we could replace a clerical elite with a lay elite," Carr said.

He noted how the bishops he knows predominantly consult with affluent and well-connected white people.

"The diversity in our church has to be reflected in the lay leadership we develop."

That diversity of voices should include, most importantly, victim-survivors of clergy sexual abuse, said Carr.

Carr explained how meeting with victims of clergy abuse in February pushed Pope Francis to take more decisive action. Carr also shared his own story of being harassed and abused while attending a high school seminary in Minnesota — a secret he kept for most of his life until he finally decided "I'm not going to be silent anymore."

"Survivors and victims have to be at the center of the discussion," he said.

In stark contrast, Weigel only mentioned the word "victims" three times, two of which were in the context of quoting an op-ed piece in the Washington Post by Shapiro.

Other speakers at the conference included Stephen White, director of The Catholic Project; Archbishop Allen Vigneron of Detroit; Jonathan Reyes, director of the Department of Justice, Peace and Human Development for the U.S. bishops' conference; Teresa Pitt Green, another clergy abuse victim-survivor and director of Spirit Fire Restorative Justice; and John Garvey, president of Catholic University.

A version of this story appeared in the May 17-30, 2019 print issue under the headline: Abuse series features starkly different views .