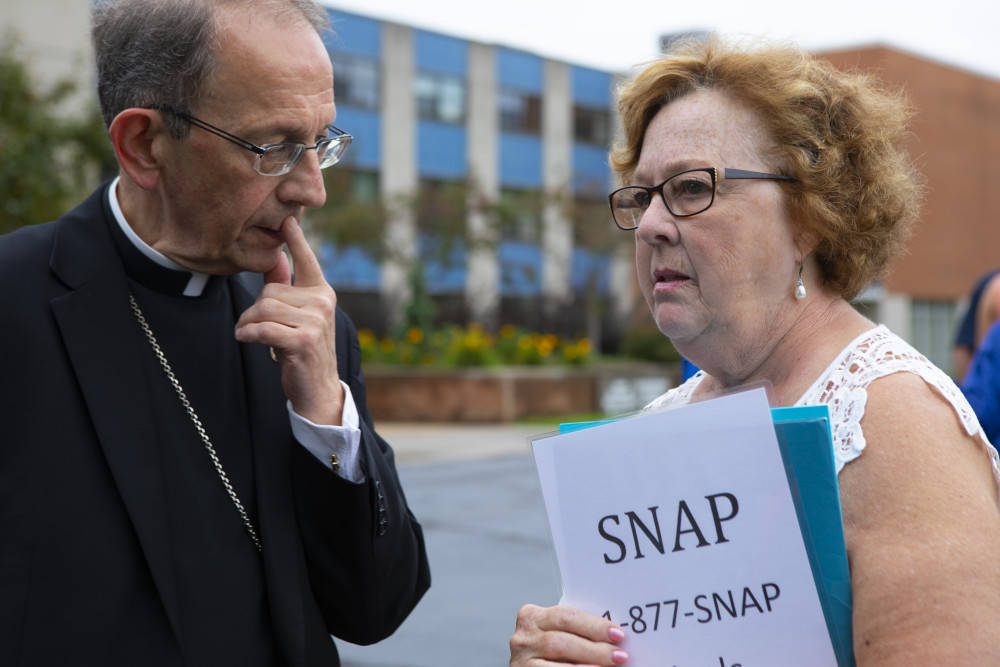 Judy Jones, Midwest regional leader of Survivors Network of those Abused by Priests, speaks with Bishop Lawrence Persico of Erie, Pennsylvania, shortly after her organization's Aug. 21, 2018, news conference in front of the headquarters of the Diocese of Erie. (CNS/Chaz Muth)

Although many Catholics' memories of the clergy sex abuse scandals that rocked the U.S. church in 2018 have dimmed, a majority of those who recalled the scandals said in a survey they felt more positive about the church's progress in confronting the issue.

Overall, 76% of respondents in the survey, conducted by the Center for Applied Research in the Apostolate, said sexual abuse of minors by clergy has hurt the church's reputation "at least somewhat."

The report, commissioned by America Media, the Jesuit ministry, was released July 19.

Fifty-seven percent of respondents said they pay either "quite a bit" or "a great deal" of attention to clergy sex abuse reports in the media. Another 27% said they've paid "some" attention to them.

Only 47% said they can recall hearing about the 2018 Pennsylvania grand jury report chronicling abuse allegations against more than 300 priests and other church workers over a 70-year period, starting in 1947, in six of the state's eight dioceses. However, majorities of men, millennials, more frequent Massgoers and non-Hispanic Catholics said they remember the report.

A plurality of 46% who correctly remembered the report said the abuse was more common prior to 2000.

Even fewer people, just 38%, recalled hearing about former Cardinal Theodore McCarrick. Then respondents were given details of his case, that after 2018 news reports spelled out his history of abuse as a priest and bishop over the previous decades, he resigned from the College of Cardinals, and a year later, Pope Francis laicized him after a canonical process found him guilty.

Asked about nine different groups of highly visible representatives of the church, "religious sisters and nuns" were most thought to be "somewhat" or "highly" trustworthy on matters of faith and morals by respondents, at 75%.

Others who were considered at least somewhat trustworthy by at least two-thirds of respondents were, in descending order, "priest(s) at your parish," "your local bishop" "laypeople in ministry at your parish" and "the Vatican." 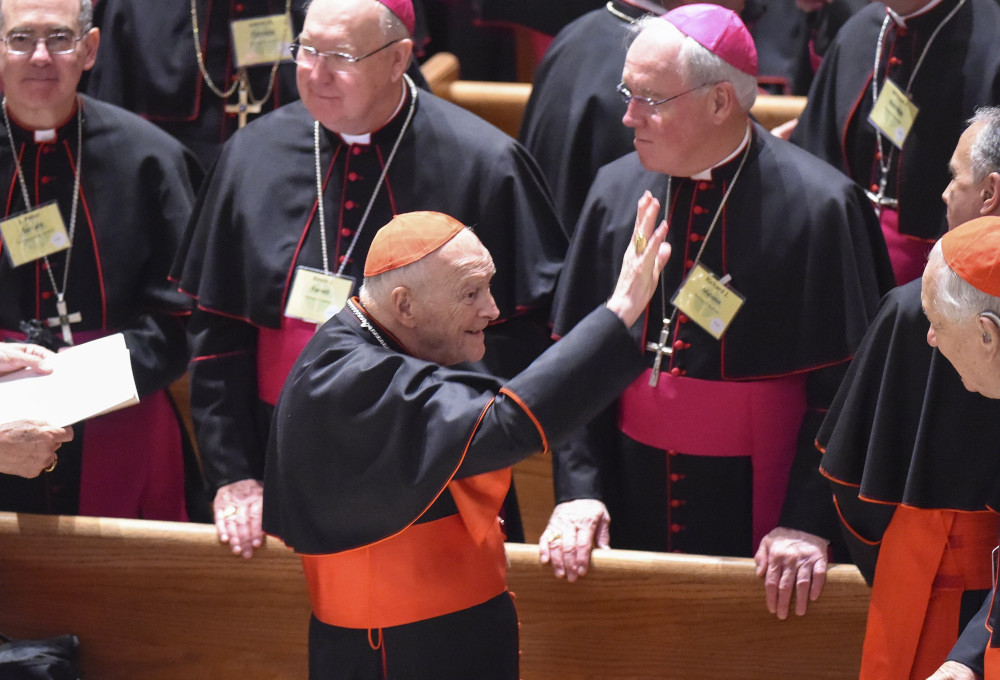 Even so, "bishops and cardinals" ranked second behind religious sisters and nuns, 44% to 41%, as a group needing to "have more influence" in the wake of clergy sex scandals. Bishops and cardinals, though, led the way among groups that respondents said should have less influence, at 26%.

A plurality of 40% said clericalism has played a moderate role in the abuse crisis, compared to 28% who said it had a minor role and 21% who said it has had a major role.

A stronger plurality of 45% said they believe the tendency of priests to abuse children in their case is "about the same" as men in other professions that work with children, such as teachers and social workers.

Another plurality, 44%, said they believed abuse today happens "occasionally" by priests, while 33% said "rarely," 19% said "often" and 4% said "never." Fifteen percent said they know someone who has been abused by a priest.

More than half said they had heard of local reports of accusations from their local newspaper or TV station, followed by 39% who said they heard it at their parish, 24% on the diocesan website, and 18% in their diocesan newspaper.

One in five respondents said a priest from their parish had been removed from ministry after a credible accusation of abuse was lodged.

Fifty-seven percent of Catholics said mainstream media gets it "about right" when it comes to coverage of the abuse scandal.

More than three-fourths of respondents said the church's reputation has been hurt at least somewhat in their eyes, with 45% saying it has been hurt "a great deal."

They also have at least some confidence in Francis "more than others" in addressing the abuse problem, followed by their parish priest, their local bishop, and "Catholic bishops as a whole."

Seventy-three percent said they agreed at least somewhat with the statement, "The sexual abuse crisis in the church is a global issue." Among seven other statements offered, the one that got the next strongest level of agreement, at 55%, was "I think what I currently know about sexual abuse in the Catholic Church is just a fraction of what really occurred." 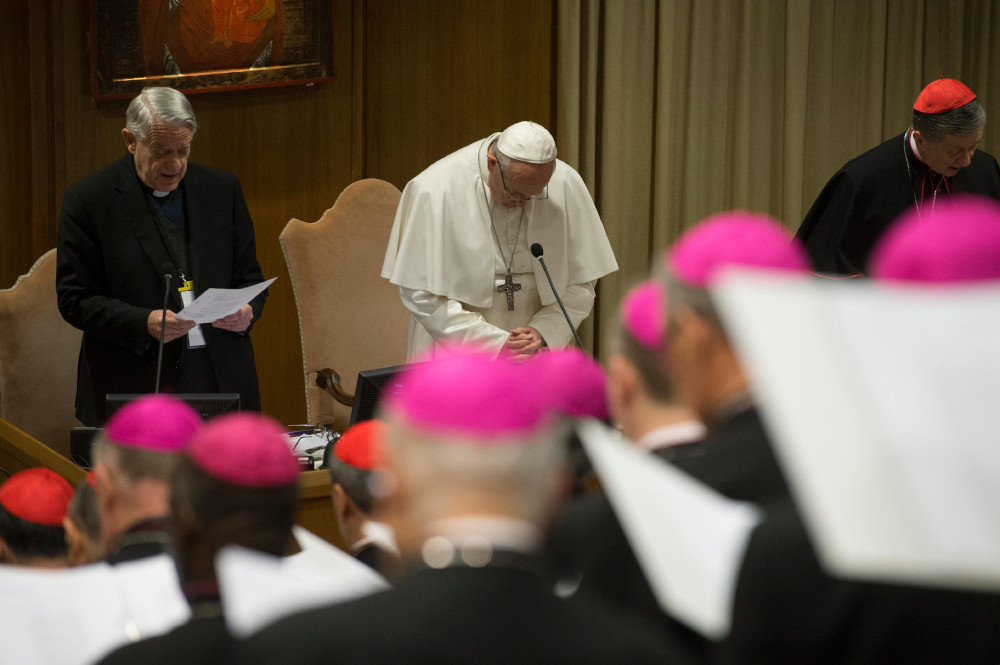 Asked separately, seven in 10 Catholics agree at least somewhat with the statement, "I am proud to be a Catholic," with 47% agreeing strongly.

Among Catholic parents who took the survey, 18% said their child has asked them about the abuse crisis, and a third of parents said they had initiated a conversation about the crisis with their child, and 47% said they had warned their kids about the possibility of abuse of them or others in a church or parish setting.

But decisive majorities of Catholic parents said the crisis had not deterred them from letting their children be raised Catholic, attend church retreats, become altar servers, attend religious education or Catholic schools, or consider a religious vocation.

Asked what respondents considered to be the top reason for church's abuse crisis, the most frequent answer given, at 23%, was "don't know." Following were celibacy/abstinence at 22%, church leadership decisions and mistakes at 18%, and "bad priests" at 15%.

Thirty-six percent of adult Catholics said they have attended a safe environment training at a Catholic school, parish or ministry. And those who took it viewed it favorably, with 94% saying it sufficiently prepared them to identify or prevent abuse, and 90% saying the training made the Catholic institution a safer place for children.

Eighty-six percent said they believed survivors of abuse should receive monetary compensation for the abuse they endured.

Less than three out of 10 Catholics said they could recall the abuse crisis being mentioned in a homily, or that their parish had formed a listening group in response to the crisis.

Just over half of survey respondents said they feel Pope Francis has handled the abuse crisis at least "sufficiently."

While only a third said their parish community has helped them process the crisis, those who had cited discussions, acknowledgment of what happened, talking about abuse in support groups, and the training and background checks most frequently as helps for them.

CARA surveyed 1,050 self-identified Catholics from May 21 to June 4. The survey was taken online and was available in English and Spanish, with 82% responding in English and 18% in Spanish. Four out of seven respondents were women.

A 55% majority of respondents were white, with 35% being Hispanic or Latino. A majority, 54%, were married. Nearly half (49%) were Democrats or leaned Democratic, while one-third were either Republican or leaned that way (33%).