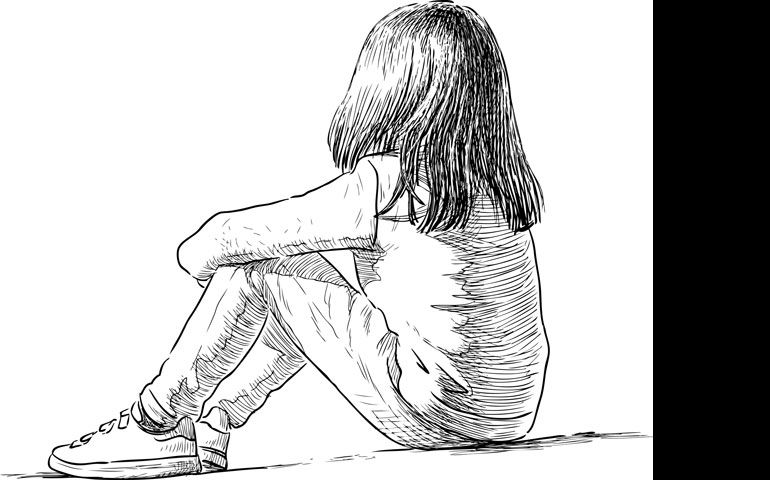 (Dreamstime)
This article appears in the Hell, hope and healing feature series. View the full series.

Editor's note: This is the first part of a four-part examination of the clergy sex abuse scandal in the Catholic church. Read more about the series "Hell, hope and healing" or download the complete report here.

The past two decades have witnessed an interdisciplinary explosion of new information about the prevalence and aftermath of child abuse and neglect.

From 1995 to 1997, the Centers for Disease Control and Prevention and Kaiser Permanente conducted a study of more than 17,000 Americans to determine how many had been subjected to adverse childhood experiences (ACEs) and what symptoms and disorders they suffered that differentiated them from those patients who did not have such histories. At the same time, researchers in clinical, developmental and neuropsychology, along with neurobiologists and trauma specialists, have increased our understanding of the potential impact of early abuse and neglect on virtually every aspect of a victim's life.

So what do we know?

The CDC data indicates that only a little over one-third of subjects had no ACEs; 26 percent had one; 15.9 percent had two; 9.5 percent had three; and 12.5 percent had four or more. The study found that symptoms and disorders in ACE survivors were correlated with the number of ACEs experienced and with the frequency and/or intensity of each particular stressor. Let's make this real.

The U.S. Census Bureau tells us that in 2014, there were about 245.2 million Americans over 18, meaning that more than 156 million adults have histories of ACEs, with more than 30 million having four or more. Over 50 million of us were sexually abused before the age of 18. Over 30 million watched our mothers get hit.

Think about these numbers when we get to the aftermath of adverse childhood experiences. Big numbers, but by now you may be wondering why you are being deluged with all this information. Isn't the issue for Catholics "just" the sexual violations of kids by priests and the sometimes still-ongoing cover-up by bishops and provincial superiors?

I would say no. While clergy sexual abuse is the ACE most haunting the church right now, it is important that Catholics take in and feel that more than every other person in their pew has a history of ACEs and every eighth person has had four or more of these devastating childhood experiences, many of which are not single episodes, but ongoing incidences of abuse, neglect, watching mom get beaten, or coming home to a drunk parent.

If churches are to be field hospitals, as Pope Francis so eloquently suggests, we should all understand who the patients really are and what they suffer, even when they don't look obviously injured. The abused and neglected are not "them"; they are us.

We now know that ACEs can have major effects on every aspect of human functioning. Symptoms and disorders increase commensurately with the more types of ACEs we have been subjected to and the more times those ACEs have occurred. Let's quickly review what happens to ACE victims and survivors.

Physical health: It is now clear that early trauma is correlated with a plethora of symptoms and disorders potentially disrupting virtually every system of the human body. With such conditions as high blood pressure, chronic pain diseases, migraines, irritable bowel syndrome, obesity, and sleep disorders, ACE survivors have more medical problems, are on more medications, and use the health system more than other Americans do.

Scientists now believe that much of this stems from a surfeit of stress hormones coursing through the bloodstream and compromising the immune system. Stress hormones are great in an emergency, but they are supposed to go back to normal levels when the crisis is over. Kids who are being abused or neglected are in emergency mode so much of the time that their stress hormones are always high, stay high into adulthood, and do physical damage over time.

In addition to medical problems, many survivors are afraid of doctors, dentists and the invasive procedures that may ensue in the course of care and therefore avoid seeking help until they are sicker and conditions are further along.

Cognition: We also now know that ACE survivors often have disrupted cognition. Part of what ACEs overwhelm is the young person's ability cognitively to contain, process and put into words the trauma they are facing.

The survivor often has attention deficits, memory problems and an inability to concentrate consistently. Contradictory thought processes ebb and flow with little predictability. One moment, we are speaking as an intelligent adult, capable of complex, flexible, abstract and self-decentered thinking. Under sufficient internal or external stress, however, or in situations somehow reminiscent of past abuse, our cognitive integrity shatters and becomes locked in rigidly inflexible, self-centered thought patterns, simplistic black-and-white opinions devoid of nuance and an immutable conviction that the future is destined to be both short and unalterably dim.

Today, we can actually view this happening on PET scans that show different brain areas lightening and darkening when a trauma survivor's stress level changes. This happens differently than in people with no adverse childhood experiences, indicating that trauma actually changes the neurobiology of the brain.

Emotions/affect: When a child is overwhelmed by ACEs, especially over time, the autonomic nervous system is overstimulated, creating anxiety and fear and releasing stress hormones. The young person's brain tries to compensate for this hyperarousal by releasing endogenous opioids that calm the system down, often to the point of psychic numbing.

Over time, this results in the person's inability to successfully modulate emotion so she or he may swing from states of intense affect to those marked by numbed passivity. Our ability to judge the true danger of a present-day situation is damaged; we may confuse people around us by overreacting or underreacting to current situations.

Relationships/intimacy: ACE survivors' expectations of others are forged in the fires of trauma. Often needy, but expecting rejection, neglect or worse from others, they may shift rapidly from dependent clinging to rage or cold aloofness.

Often the adult survivor's history is littered with unsuccessful friendships, work relationships, and romances that confuse and hurt both them and those around them.

Especially where the ACEs have included sexual abuse, normal sexual functioning is elusive. Even sex with a beloved other can trigger flashbacks or terrifying emotional states that interrupt sexual encounters or lead us to avoid sex. Sexual abuse survivors may blame their bodies and sexual responses for the abuse and can be too ashamed to be comfortably sexual.

Heterosexual boys abused by men may be tormented with doubts about their sexual orientation. On the other hand, homosexual boys who are sexually abused are robbed of the opportunity to grow gradually into their sexuality; instead, the perpetrator imposes it on them.

Sense of self: ACE survivors often have a fractured sense of self. One part of the traumatized child may be formed as a precocious individual who can learn, make friends, get a job later in life, and obtain an education. This may be the person two spaces away in the pew that seems to be just a regular Joe. Another aspect of the person, however, remains a frightened, grief-stricken child who emerges when conditions are reminiscent of the original trauma.

For victims of priest abuse, for example, a Roman collar, someone clicking rosary beads, or certain hymns can evoke this child. The survivor, no longer firmly rooted in the present, may experience the memories, fears and bodily states he or she felt back then.

Behaviors: Most survivors think that they were somehow responsible for what happened to them or in their families. We impose standards on ourselves that we would never turn on another survivor — we should have stopped it; we could have prevented the domestic violence; if we spent more time with Dad, he would have stopped drinking. Depending on the nature of the adverse childhood experience, survivors feel dirty, ashamed, worthless and self-loathing.

Often they take their guilt, rage and self-hatred out on themselves through self-destructive behaviors like substance abuse (which also deadens psychic pain); promiscuous and unprotected sex; walking alone in dangerous areas at night; cutting legs, thighs, arms and pubic areas; tearing out eyebrows and hair; hustling or prostituting; or making suicidal gestures.

Sometimes they die. In fact, ACE survivors are almost three times as likely as other individuals to make at least one serious suicidal gesture in their lives.

Spirituality: Research indicates that many ACE survivors turn away from religion and even from God. We develop our image of God through the way we are parented early on and through religious experiences we may have.

Our capacity for awe, for experiencing wordless times of wonder and transcendence, depend in large measure on the nature of our early relationships. When these are betrayed through abuse, neglect, witnessing domestic violence, or serious dysfunction, our capacity to surrender to the ineffable that is God may be destroyed.

The especially heinous aspect of sexual abuse by priests and the depravity of the cover-up and unapologetic stance of bishops and provincial superiors often renders asunder the young person's ability to look to God for comfort and mercy. Instead, the priest as God to the child or adolescent has become a criminal transmitter of evil.

Author and clinician Richard Gartner quotes one patient who was sexually abused by a priest: "It taught me that there is a lie in the world. As I grew up and gave up on my piety, I grew to hate the smells, sounds, feelings of church. ... My spirituality and ability to believe in a higher power were destroyed."

So how does the man or women a few spaces down in the pew seem so, well, normal? In the next piece in this series, I address the processes of healing and the resilience that can transform the deepest of wounds into just noticeable scar tissue.

Part 2 of this series, focusing on hope and healing for survivors of sexual abuse, will be posted soon on NCRonline.org.

Trauma can bring about growth

There is hope for survivors to heal

Outraged over police raid on church offices? Wait for what is revealed