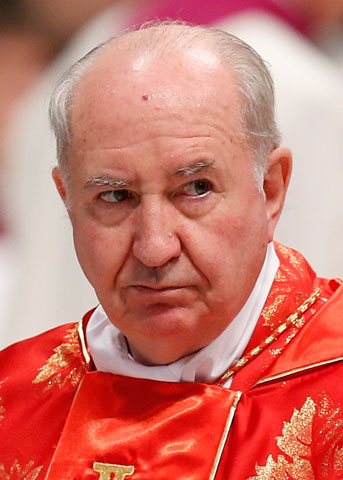 Home today is an apartment in Society Hill, Philadelphia, but when Juan Carlos Cruz was growing up in Chile in the 1980s, his family lived close to El Bosque, "the forest" -- a tree-draped park avenue and a prime neighborhood in Santiago, the capital city. It was also home to a charismatic pastor, Fr. Fernando Karadima, surrounded by well-dressed boys from top schools, and later unmasked as a sexual predator.

"We were a close family, with grandparents nearby and many friends in the area," Cruz, now the head of a communications division for a Fortune Global 500 company, told NCR in recent interviews.

Everyone he knew growing up was conservative. His father was a banker who moved the family to Madrid after Salvador Allende, a Socialist, was elected president of Chile in 1970. Cruz attended middle school in Spain.

After Allende's death in the 1973 coup that launched Gen. Augusto Pinochet's dictatorship, the family moved back to Chile. In El Bosque, which was untouched by torture or disappearances, Pinochet was popular -- and a figure of praise in Karadima's sermons.

The priest had a magnetism that entranced Cruz. He was 15 when his father died, and he sought solace in Karadima. Six years later, Cruz entered a diocesan seminary.

Nothing in those back pages prefigured the catalytic role that Cruz and other men would play in 2010, when they revealed their teenage traumas to the Chilean media, pushing Karadima into the spotlight as a sexual abuser of minors and forcing a Vatican investigation.

The Congregation for the Doctrine of the Faith probe also made news. In 2011, the Vatican conducted an investigation and ordered Karadima into a secluded "life of prayer and penitence" -- the same sentence the congregation had given Legion of Christ founder Marcial Maciel Degollado in 2006, when he was 86 years old.

Like Maciel, Karadima, who today is 82, created a cult of personality in conservative folds of society.

He is apparently still at it. News outlets recently ran cellphone photographs of Karadima saying Mass for followers, flouting the Vatican order. According to another press report, he has sworn his innocence on a tabernacle to priest friends.

Karadima has become a symbol of the Vatican soft-glove punishment style and of how civil statutes of limitations prevent authorities from prosecuting sexual criminals in the church.

The Karadima saga also has reverberations for Pope Francis.

Last year, Francis named Cardinal Francisco Javier Errázuriz Ossa, Karadima's most powerful defender, as one of eight cardinals on the commission advising him on Vatican reforms. Errázuriz refused to act on a victim's allegations in 2003, telling the priest not to worry, according to news accounts and legal testimony.

"Why would Pope Francis, who's trying to clean up the church, pick a man like Errázuriz who has done so much harm to so many by his actions?" Cruz asked. "Errázuriz said he did not believe us, and minimized sex abuse cases. Ezzati has done the same thing. Why are men like this confidantes of the pope?"

Errázuriz, 80, forged ties with then-Cardinal Jorge Mario Bergoglio on the Latin American Episcopal Council in the decade before the Buenos Aires, Argentina, prelate became pope. A native of Santiago and member of the Schönstatt Fathers, a traditionalist German order, Errázuriz as a young priest held two positions at congregations in Rome. Pope John Paul II made him a bishop in 1996; two years later, he became archbishop of Santiago, and got to know Bergoglio. John Paul made Errázuriz a cardinal in 2001.

When Pinochet was arrested in London in 1998, on orders of a magistrate judge in Madrid investigating atrocities against Spanish citizens during the Chilean dictatorship, Errázuriz denounced the move. He later criticized human rights lawsuits in Chile against Pinochet and other officials of the former regime, saying, "Excessive justice could be detrimental to reconciliation and social peace."

In 2003, José Murrillo, a 28-year-old philosophy student who had broken away from Karadima, wrote Errázuriz about Karadima's predatory behavior. "Unfortunately," Errázuriz told The New York Times in 2010, "I judged that the accusations were not credible at the time."

Murillo, who later earned a doctorate from the Sorbonne, joined Cruz and Dr. James Hamilton, a prominent physician in Santiago, in speaking with journalists in 2010, recounting a history of abuses by Karadima.

Cruz credits his several years in seminary with "exposing me to poor people and how they struggled to make whole lives" -- a struggle he soon shared, as he became a journalist, stalked by traumatic memories of Karadima. In time, as he came to terms with being gay, the social conservatism of Chile weighed on him. In the 1990s, he landed a job in corporate public relations in America.

Hamilton had applied for a marriage annulment, after telling his wife of a long psychosexual entanglement with Karadima that began when he was 17 in El Bosque. His wife confided in a priest, who told Errázuriz in 2006. When a canon lawyer and several priests close to the cardinal suggested that Hamilton not mention Karadima, he pressed on with his request in order to force the issue of punishment for the priest while having his marriage annulled.

As the news of allegations exploded in 2010, the cardinal sent a file on Karadima to Rome that was reportedly 700 pages, with accusations going back to the 1980s.

Errázuriz's successor as Santiago archbishop, Ezzati, was born in Italy. Ezzati, 72, entered the Salesian order at 17, studying at a seminary in Chile.

"I am of Italian origin and Chilean vocation," he once said of a career that took him back to Rome for theological studies.

The Salesians are known for their work with youth and running schools. In California, they paid well into the millions to resolve sex abuse cases brought by former students at their schools. Ezzati became rector of a Salesian seminary in Chile. He returned to Rome in the 1990s for work in the Vatican's Congregation for Institutes of Consecrated Life and Societies of Apostolic Life. In 1996, John Paul named him bishop of Valdivia in southern Chile. Ezzati found a mentor in Errázuriz.

Ezzati is trailed by a scandal moving into the discovery phase of civil litigation. Just before Ezzati received his biretta in Rome, victims of a Salesian priest, Rimsky Rojas, accused Ezzati of obstruction of justice in Valdivia. One of Rojas' reported victims was a young man who disappeared after making the accusations and has never been found.

Ezzati denied obstructing justice, though the lawsuit, made available to NCR, charges that the bishop knew Rojas was moved to new assignments despite accusations, and remained passive. Rojas committed suicide in 2011.

In the eyes of the Vatican, and presumably Francis, Ezzati gained standing to become a cardinal by being apostolic visitator of the scandal-mired Legionaries of Christ, an order with a strong presence in Chile. As archbishop of Santiago, Ezzati inherited the oversight for Karadima, whose life draws comparisons to Maciel's in media coverage.

The Vatican investigation of Karadima had an unintended impact. In 2011, with prosecutors hampered by the statute of limitations, and Errázuriz's complicity exposed by the media, Chile's highest appellate court ordered a magistrate, Judge Jessica González, to take testimonies from witnesses and determine whether some law might apply to Karadima.

In a country that was barely a generation into rebuilding democracy after Pinochet lost a plebiscite and retired as president, the Karadima case showed that even people in El Bosque could suffer injustice -- not under a government regime, but under the church.

"The Chilean church was more united on human rights than any other Catholic church in Latin America," said Alexander Wilde, a senior scholar for the Latin American Program of the Woodrow Wilson International Center in Washington, D.C. "We all remember great names from the Salvadoran and Brazilian church who stood for human rights, but the Chilean hierarchy was relatively united in its stance -- unlike Argentina."

In the dirty war (1976-83) the Argentine hierarchy was largely supportive, silently or publicly, of the military regime in which 30,000 people disappeared. Bergoglio became a bishop after the war.

Wilde worked in Chile as a Ford Foundation grant officer during the transition to democracy, and later directed a project on religious response to violence at the Center for Latin American and Latino Studies at American University in Washington.

"The general impression after 1990 [when Pinochet stepped down] is that the church had cashed its check of credibility for solid defense of human rights and made a shift to issues of sex, morality and the family," Wilde told NCR.

"The impact of Karadima was similar to what we have seen in Ireland, Spain, Italy and America. Every place you find the church in sexual or financial scandals, it has the same effect. In many ways, people stopped looking at the church as a moral beacon. That was not true of the most culturally conservative Catholics, but it is certainly true in terms of the church in social leadership."

In her 84-page report, González sorted through a thicket of legal issues on the statute of limitations. She observed, "The atmosphere of El Bosque was a group of upper-class people, conservative, closed, totally manipulated by Karadima, who imposed his will and exercised a power and an absolute influence."

She called him "a director of life to those who formed an even more closed circle," in an oblique reference to four of the boys who entered seminary under his auspices, became priests, then bishops, and quietly stood by him.

The judge remarked on Karadima's use of "moral violence" on those under his power. The report included graphic accounts of sexual abuse.

The judge wrote that Hamilton's will "was annulled, crushed or subjugated by the authority exerted by the offender without any limits, making the victim resign himself to the abuses."

Nevertheless, under the law, she concluded, the passage of time meant that Karadima -- who asserted his innocence -- could not be prosecuted.

González questioned Errázuriz, as well as other victims of Karadima, in the priest's presence. Karadima, in denying the accusations, at times seemed to mock the men.

Since the failure of church and state to effectively prosecute Karadima, the Chilean media has become more aggressive in its coverage of convulsions in the church. Among the events unfolding:

Hamilton, Murillo and Cruz have a pending civil lawsuit against the Santiago archdiocese.

Hamilton, now remarried, is a respected physician; he speaks often to the media about the church's handling of abuse cases.

Murillo, married with two children, is president of Fundación Para la Confianza, which works for the prevention of child abuse. The Santiago-based foundation was founded by the three Karadima survivors.

In the off-hours from his corporate position, Cruz maintains a public stance as a critic of the church in Chile. His memoir, The End of Innocence, will be published in Spanish this summer.

[Jason Berry was co-producer of the recent Frontline film "Secrets of the Vatican." He is author of Render Unto Rome: The Secret Life of Money in the Catholic Church.]

A version of this story appeared in the April 25-May 8, 2014 print issue under the headline: Chilean cardinals close to pope stained by abuse cover-ups.