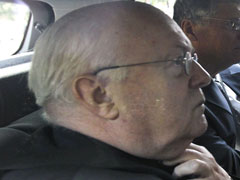 BRUSSELS, BELGIUM -- So what is going on in “Catholic Belgium”? many seem to be asking. And why has it become the latest location to explode in the clergy sex abuse scandal?

First, the presumption that Belgium, a nation of 11 million, is a Catholic country has to be qualified. Statistically, the claim is true. Today, more than 7 million people, or about three quarters of the population, are Roman Catholics. As elsewhere in Europe, however, Sunday church attendance has dropped significantly and is now well below 10 percent. A strong Catholic culture still exists, but increasingly along with a strong sense that the official church has been conducting too much business behind closed doors.

This latest sentiment, along with a new resolve by the government not to be seen as lax in dealing with sex abuse issues, means that for many the June 24 police raid on the offices of the Catholic church in Belgium was not as shocking here as it might have been to the rest of the world.

Authorities seized thousands of documents, as well as 50 computers, including the personal computer of Cardinal Godfried Danneels, former archbishop of Mechelen-Brussels. Danneels was later cross-examined by Belgian federal police examiners during an arduous 10-hour hearing. He was cleared.

Four forces are at work here, all of which have implications for the larger church.

First, Belgian authorities have reacted quickly and thoroughly to charges of sex abuse against children, particularly following the revelations about and departure of the former bishop of Bruges, Roger Vangheluwe, for various sex abuse offenses. The police also don’t want to repeat their embarrassing bungling of the Marc Dutroux affair.

Dutroux, still in prison, is a Belgian serial killer and child molester who kidnapped, tortured and sexually abused six girls in 1995 and 1996. The girls ranged in age from 8 to 19. Dutroux murdered four of them. He also murdered his former accomplice, Bernard Weinstein. Although Dutroux was arrested in 1996, his widely publicized trial did not take place until 2004. Belgian newspapers were fiercely critical of the authorities’ mishandling of the Dutroux case. Indeed, a number of shortcomings in the Dutroux investigation caused widespread discontent in Belgium about the country’s criminal justice system. The Dutroux scandal was one of the reasons for the reorganization of Belgium’s law enforcement agencies.

Today, therefore, law enforcement and legal authorities in Belgium will not relax their efforts to find and prosecute pedophile criminals in Belgium.

Second is a growing call for transparency. Traditionally, transparency has not been an essential element in Belgian daily cultural mores. Belgians maintain a polite exterior and deal with their problems behind closed doors. If you have a family problem, you do not discuss it in public but go into your home, close the doors, even close the shutters on your windows, and deal with the problem in private conversation. The church too followed this practice -- until the revelations about Vangheluwe.

Vangheluwe was a much-liked and popular bishop. When it was revealed that he was not only a pedophile but that he had abused his own nephew, something clicked in Belgian sensitivities. People were terribly shocked and deeply shaken. Almost overnight they began to say, “No more hiding! It all has to come out.” Come out it did and still does. Authorities continue to be inundated with reports of sexual abuse across the country.

The third point is the state of the church in Europe. Pope Benedict XVI has announced the creation of a new department at the Vatican: the Pontifical Council for New Evangelization. The pope hopes this new office will clear up problems created by secularism in Western Europe. What the pope might not fully realize, however, and what his new department will not likely clear up, is the impact of current European-wide tsunami of people coming forward with reports of sexual abuse in the church. A canon lawyer who has been working with abuse cases for the past 10 years, but is restricted from speaking on the record, said in a long phone conversation recently that we are witnessing just the start of an immense reporting of sexual abuse and the start of an ecclesiastical revolution. It is unclear whether the Vatican can even understand what’s really happening.

Fourth is the person of Danneels. The former archbishop of Mechelen-Brussels and grand chancellor of the Catholic Universities of Leuven and Louvain-la-Neuve has been much in the news. It is now clear -- and Belgian newspapers are acknowledging this as well -- that certain people in Belgium have a vendetta against him and are using the sex abuse issue as a tool to blemish his name and reputation as an intelligent and wise churchman. So far all law enforcement cross-examinations of Danneels and searches through his computer and masses of seized documents have cleared him of all suspected criminal activity.

The point is made, however, that if someone like Danneels can come under suspicion, being a prince of the church no longer affords the kind of protection from civil authorities such a position once enjoyed.

Victims demand action as Vatican abuse panel gets down to work