Pace of change in the church not as swift as some may like, DiNardo says 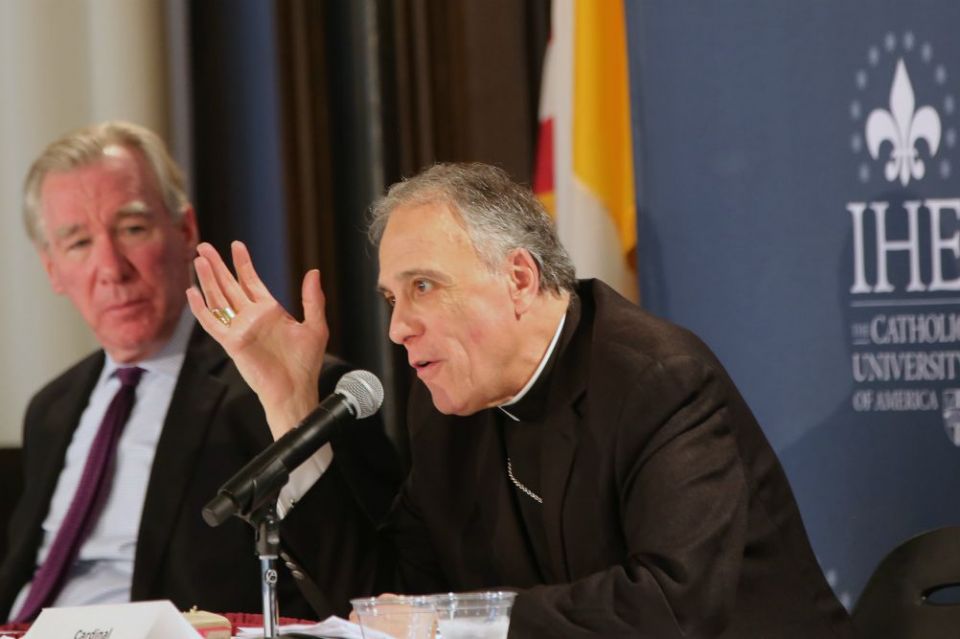 Cardinal Daniel DiNardo of Galveston-Houston, president of the U.S. Conference of Catholic Bishops, responds to a question during a conference on "Healing the Breach of Trust: The Role of the Laity in Responding to the Crisis" Feb. 6, 2019, at The Catholic University of America in Washington. Looking on is university president John Garvey. (CNS/Bob Roller)

Washington — Younger bishops are generally angrier about the sexual abuse crisis and want to act with more urgency to deal with it than older bishops, said the president of the United States Conference of Catholic bishops.

"Some of the younger bishops are more angry than some of us who have been around a little longer," said Cardinal Daniel DiNardo, archbishop of Galveston-Houston, answering a question on assessing the general mood of the bishops. "They want to move with real force — thank you. They want to move with real 'now' — thank you, in some sense," DiNardo said of the younger bishops. "But they also have to know that prudence is also needed," he added.

DiNardo made the remarks while participating in the second meeting of the "Healing the Breach of Trust" conference at The Catholic University of America (CUA). The Feb. 6 meeting focused on the role of the laity in responding to the church's current crisis. DiNardo and Catholic University President John Garvey opened the daylong conference with comments and a 20-minute question-and-answer session, followed by presentations and a panel discussion with prominent historians and theologians. According to a spokesperson for the university, the event was free and open to the public, and two-hundred people registered for the event beforehand.

"I actually do not think there is that much disunity among the bishops about what we need to do to go forward," said DiNardo. "Some want a little more action."

DiNardo emphasized that the pace of change in the church is not as swift as some may like. "We're a universal church, sisters and brothers; sometimes it moves painfully slow," he said. Pope Francis similarly urged the bishops to be cautious and to do their discernment before taking more action, said DiNardo.

DiNardo also addressed the anger of the laity expressed in letters sent to him. He said that he has received thousands of letters from lay people expressing their anger over the crisis. Some common themes he noticed were anger and confusion as to why the issue of sexual abuse was not dealt with in the past, concerns about homosexuality, and fear that the church has become "undisciplined with traditional faith" and should return to the Latin Mass.

He also noted that what most angers people is the situation regarding former U.S. Cardinal Theodore McCarrick. McCarrick, the retired archbishop of Washington, resigned from the College of Cardinals in July 2018 following accusations of inappropriate behavior with seminarians and sexually abusing a minor in the early 1970s.

Michael Root, professor of systematic theology at CTU, said during his presentation that McCarrick is a symptom of a larger culture of "don't ask, don't tell."

"I think the deeper issue here, beyond the narrow question of child sex abuse, is to what degree do child sex abuse, or what went on with Cardinal McCarrick, reflect a larger culture of 'don't ask, don't tell,' " Root said. "The laity, if that's the case, need to say that really needs to end."

Root noted that, according to Vatican II, it is the "duty" of the laity to speak up and "express their views when they see the good of the church in danger." Christopher Ruddy, CTU associate professor of systematic theology, similarly argued that Vatican II sets the tone for laity-clergy relationships in which the laity should have the "freedom and confidence" to make their desires known.

DiNardo said that this conference offered a chance to "think about what the Spirit is doing in all this" and discern possible paths forward. "In saying this, I am in no way trying to deny or dodge the issues of episcopal responsibility and accountability that this crisis has raised," he said.

The cardinal responded to questions from the audience. The university had notified media before the event that reporters "would not be invited to participate in the question and answer portion in the event with the cardinal." Additionally, the notice said, no requests for interviews with the cardinal would be granted.

In the wake of the crisis, and through collaboration with laity, DiNardo expressed hope for the emergence of a "new ecclesial season." This new season, he said, could be radical in its devotion to Christ and more purposeful in how the church is structured, such as sharing administrative duties with laity so that bishops can focus more on their pastoral duties and preaching.

Garvey said that trust in the church can be rebuilt if we think of the relationship between church and laity as a marriage, where bishops listen to laity because of love rather than constitutional authority. If the marriage isn't fixed, he said, "We'll lose the next generation of Catholics."

Before leaving for the day, DiNardo said that "the cross is the solution" to the church's crisis.

"I just believe generally that in the United States, the cross is not upheld as the source of who we are," he said. "The cross is everything."

[Jesse Remedios is an NCR Bertelsen editorial intern. His email is jremedios@ncronline.org.]

On abuse: Francis yet to make critical clerical changes