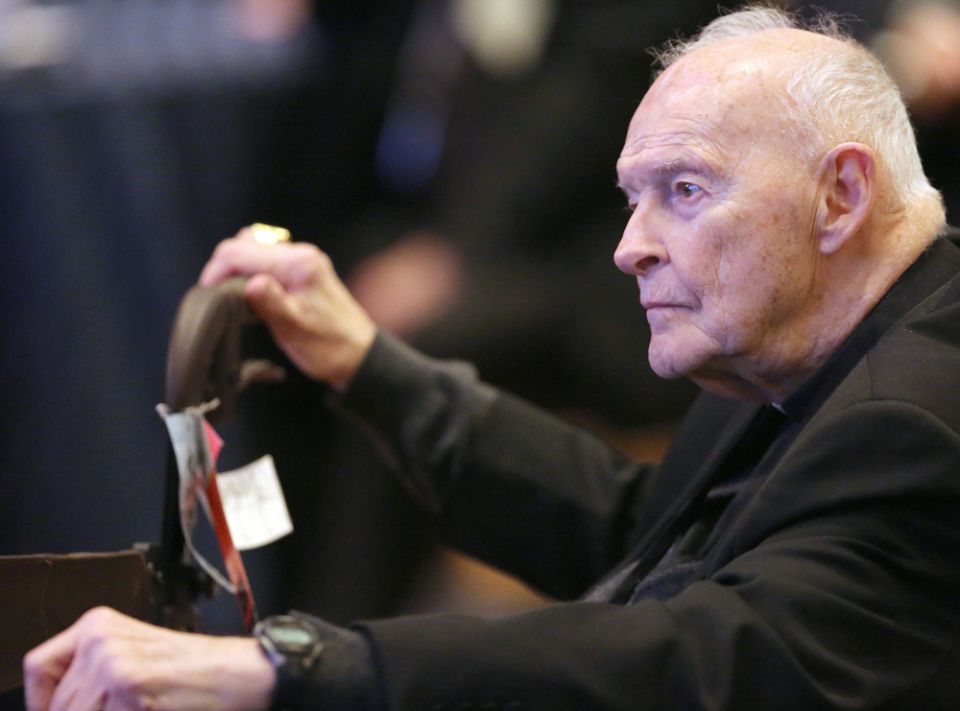 In this 2017 file photo, former Cardinal Theodore McCarrick of Washington is pictured in Baltimore, Md. A recent news report says a decision on whether to laicize McCarrick could happen in mid-January. (CNS/Bob Roller)

Washington — As U.S. bishops gathered in early January at a seminary in Illinois to pray and reflect about the American church's sex abuse crisis, reports trickled out about the possible fate of one their own being decided overseas.

The Wall Street Journal newspaper reported Jan. 5 that a decision on whether to laicize former U.S. Cardinal Theodore McCarrick, who's facing accusations that he sexually abused minors, could come as soon as mid-January because Vatican officials don't want the decision to overshadow a gathering the pope has called for, seeking to meet Feb. 21-24 with prelates from around the world about protecting minors.

Pope Francis accepted the prelate's resignation from the College of Cardinals last July, and last September, the Archdiocese of Washington, to which he last belonged, announced that McCarrick had been sent to live among a small community of Capuchin Franciscan friars in rural Kansas. The Vatican, meanwhile, has been investigating the accusations in order to make a decision about whether the 88-year-old archbishop will return to the lay state.

On Jan. 5, the online Catholic news outlet Crux reported that the Vatican's Congregation for the Doctrine of the Faith, which handles clergy sex abuse claims among some of its responsibilities, is reviewing a third case involving McCarrick and a minor, one more case than previously reported.

After accusations came to light last summer that McCarrick had abused a minor almost five decades ago, in his early years as a priest in New York, Pope Francis removed him from public ministry. Since then, other accusations involving abuse of adult seminarians have been reported, but now two subsequent ones involving minors have made news. McCarrick has denied wrongdoing and while he cannot be criminally prosecuted because the cases are too old, the Vatican can take action regarding his ability to exercise the priesthood.

But the case looms over the U.S. bishops because many are asking why he was allowed to ascend the hierarchical church ladder when some in church circles had reported questionable behavior to the Vatican.

St. John Paul II made him a cardinal in 2001, while he was Archbishop of Washington, and he had previously served as auxiliary bishop in New York, bishop of Metuchen, New Jersey, and archbishop of Newark, New Jersey.

Quick Reads | As US bishops meet, Vatican may be deciding McCarrick's fate