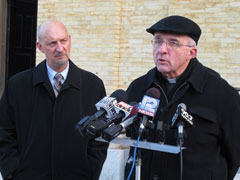 In December, Fr. James Connell speaks at a Milwaukee news conference of the Survivors Network of those Abused by Priests as the group's Midwest director, Peter Isely, looks on. (AP photo/Dinesh Ramde)

Editor’s note: We recently received a phone call from a reader who asked, regarding the clergy sex abuse crisis, "When I see ‘credible accusation’ in newspapers, what does that mean?" We took a closer look at the term.

The phrase “credible accusation” appears regularly in media accounts of clergy sexual abuse of minors. It generally indicates that those making an initial judgment believe the accusation against a cleric has some merit.

While experts interviewed for this story pointed out repeatedly that a credible accusation does not mean the accused is guilty, it does mean the accused is removed from ministry immediately and not allowed back unless the accusation cannot be substantiated, which can take years. Meanwhile, a clergyman’s reputation is damaged and, some would say, can never be fully restored.

Yet no precise definition or standard exists for what it means to be “credibly accused,” leaving each diocese to decide on its own what credible means.

The term is not in the language of church law, but draws its meaning from another imprecise phrase, “semblance of truth,” from Canon 1717. An accusation is credible if there is about it “a semblance of truth.”

The lack of precision in language is one of the flaws exposed by the recent Philadelphia grand jury report, which claimed that more than two dozen priests in the Philadelphia archdiocese who should have been removed from ministry had remained active.

A credible accusation does not label a person as guilty or not guilty; it merely shows that an accusation at least seems true, said Fr. James Connell, a priest in the Milwaukee archdiocese who is also a canon lawyer and a member of the Diocesan Review Board.

The “Essential Norms for Diocesan/Eparchial Policies Dealing with Allegations of Sexual Abuse of Minors by Priests or Deacons” were drafted from the Charter for the Protection of Children and Young People, adopted by the U.S. bishops in Dallas in 2002, revised in 2005 and approved by the Holy See in 2006. The norms outline, among other things, the actions of the preliminary investigation.

The initial investigation is very quick, said Fr. Michael Sullivan, a canon lawyer and priest in the St. Paul and Minneapolis archdiocese. “That’s to make sure that if the priest is somebody who has done this or is likely [to] have done this, they’d be able to remove him in the most immediate time as possible.”

Sullivan is a member of Justice for Priests and Deacons, a nonprofit group that advises clergy about their rights under canon law.

In Milwaukee, for example, the first steps the archdiocese takes after an accusation is to go to the local district attorney’s office and place the priest on leave, Connell said. The police review the matter and determine if they can pursue it or not. The archdiocese has its own investigator (typically an experienced outsider, such as a retired police officer) start a preliminary investigation.

The investigator presents findings to the Diocesan Review Board, which then deems if the accusation at least seems true or not.

Connell explained that the review board is not a trial -- it’s an advisory group to help the bishop evaluate if the accusation seems true or not. It is akin to a grand jury, he said, and this can cause confusion.

“One of the dangers could be that the people in the pews, they may understand that what the review board is doing is an actual trial, but it isn’t a trial,” Connell said. “So when the bishop says to a parish, ‘The review board gave me their recommendation, we’re going to follow it, we think there is a semblance of truth to this, we’re sending the case to Rome,’ and he’s explaining that about their pastor, people in the pews might understand it to mean he’s guilty. That’s not true. That’s not what’s being said.”

If the accusation is found to be credible, the board advises the bishop and a report is sent to the Congregation for the Doctrine of the Faith at the Vatican.

The congregation can authorize the bishop to hold a trial locally or ask the bishop to gather and send more information, or it can rule “that there is not sufficient evidence of the commission of an ecclesiastical crime.”

Generally speaking, the Congregation for the Doctrine of the Faith lets the bishop choose what to do, Sullivan said.

Most often, the congregation accepts the bishop’s and his review board’s recommendation that the accusation is credible and authorizes the bishop to formally remove the accused from ministry and, in most cases, laicize the priest.

Much hinges on how a review board and a bishop understand that vague term “credible accusation.”

“It’s a very loose term and … it’s based upon what the particular dioceses or religious order would interpret that as meaning,” Sullivan said.

Fr. Michael Maginot, canon lawyer and priest in the Gary, Ind., diocese, said that semblance of truth seems to be the most minimal of standards, in part because there is no clear standard on how it should be upheld in each diocese. Maginot is also a member of Justice for Priests and Deacons.

The vagueness of the term has led advocates for priests to complain since the drafting of the Dallas Charter that the process violates due process rights of the accused.

The disparity in definitions and language caused concern for Connell as he prepared in 2010 to meet with his new archbishop, Jerome Listecki, who had come to Milwaukee from La Crosse, Wis.

Connell looked at the La Crosse review board and found that instead of using “semblance of truth” for the standard of proof in preliminary investigations of sex abuse, La Crosse was using “moral certitude,” which is somewhat similar to civil law’s “beyond a reasonable doubt.” It was, he thought, a violation of the Essential Norms.

Connell had heard that approximately 60 percent of the allegations against priests in the La Crosse diocese were held to be unfounded or unsubstantiated. He later heard Listecki use the same statistic.

Connell found that the 2009 Annual Report published by the Office for Child and Youth Protection of the U.S. bishops’ conference reported that on a national average during 2006 and 2009, local review boards had ruled that about 10 percent of allegations made were unsubstantiated and approximately 90 percent were considered credible.

Connell put his conclusion in an open letter widely circulated last year: He wrote, “The consequence of using an incorrect standard of proof could mean that children in that diocese are at risk” (emphasis in the original).

If any accusation is made against a priest, he should be removed from ministry immediately, said Barbara Blaine, founder and president of the Survivors Network of those Abused by Priests, or SNAP. The church’s response throughout history has too often been calling victims not credible, she said.

It is far easier for an adult to repair his or her reputation than for a child to recover from the trauma of being abused, she said.

David Clohessy, national director of SNAP, said that the standard of “semblance of truth” is fine, but it’s the implementation that is lacking.

“Sadly, very little is working for victims when they report to church officials,” Clohessy said. “That’s why we urge victims to try secular routes first [and] go to church as last resort.”

“In a system where one man has almost boundless power, that power is almost destined to be abused, no matter what policies, procedures and panels exist, on paper or in reality,” Clohessy said. “That’s the crux of the problem.”