McCarrick verdict is the latest marker on the road to conversion 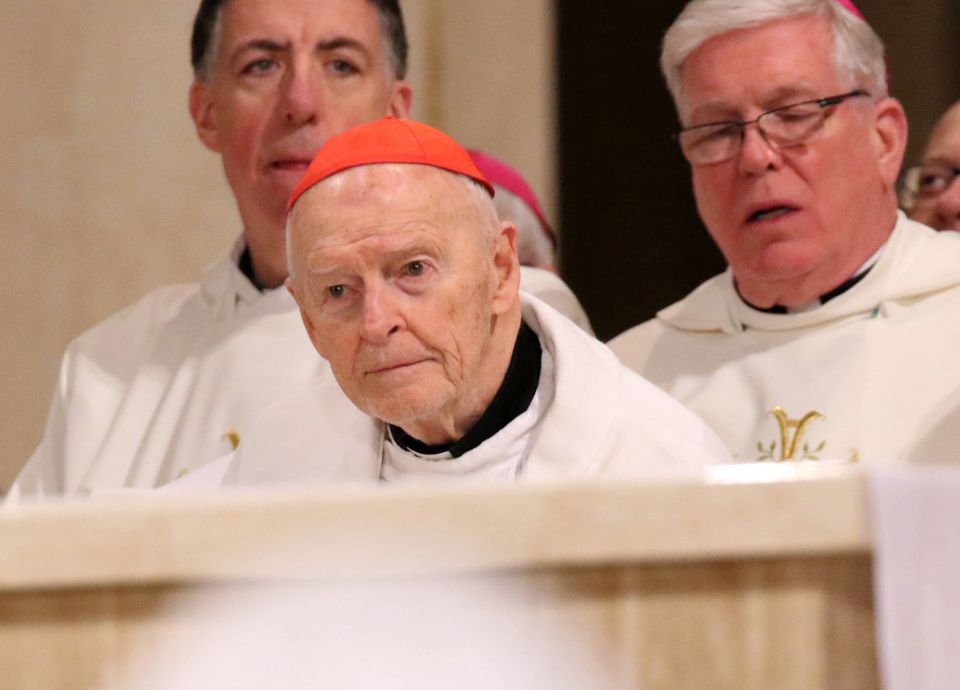 Cardinal Theodore McCarrick, retired archbishop of Washington, is seen during the opening Mass of the National Prayer Vigil for Life at the Basilica of the National Shrine of the Immaculate Conception in Washington Jan. 18. The cardinal said June 20 he would no longer exercise public ministry after an allegation of abuse by him against a teenager was found credible. (CNS/Gregory A. Shemitz)

McCarrick served as a priest for 60 years. He served the church as president of the Catholic University in Puerto Rico, as bishop of Metuchen, New Jersey, and as archbishop of Newark, New Jersey, and later of Washington. He became a cardinal and participated in the conclave of 2005 that elected Pope Benedict XVI. McCarrick was a "man of the conference" serving on a variety of committees over the years.

He was one of the church's foremost ambassadors, traveling to countries most of us could not spell and some we had never heard of, building relationships across ethnic and racial and denominational lines. Even in retirement, his schedule would have been daunting to a person half his age, but he kept at it. All for the good of the church.

None of that protected him from the charge of having abused a minor. None of it should have protected him. It is now clear that after years, decades and probably centuries of covering up the crimes of the clergy regarding the sexual abuse of children, now a regime of transparency and accountability is firmly enough in place that no one, not even a cardinal, can be considered above the law. They may get a pass for other crimes and failings, but not this. For all the continued problems — the Chile situation, the curial foot-dragging that led Marie Collins to resign from the Pontifical Commission on Child Protection — the culture at the Holy See has begun to change on this issue. Twenty years ago, such allegations would have been swept under the rug. Not anymore.

Cardinal Bernard Law resigned as archbishop of Boston in 2002 for covering up sexual abuse by others so egregiously he could no longer credibly lead the archdiocese. The late Cardinal Keith O'Brien of Edinburgh is the only other cardinal to have resigned from public ministry over allegations of sex abuse, although those charges involved subordinates who were nonetheless adults. And Australian Cardinal George Pell has effectively resigned his Vatican post, returning to his home country to face allegations of abuse.

It is noteworthy that the previous settlements for sexual misconduct involving adults had not resulted in the drastic step of resigning from public ministry. Nor should they. Priests sometimes fail to keep their vows of celibacy just as married men and women sometimes fail to keep their vows of fidelity. The sexual abuse of a minor — or a subordinate, which constitutes an abuse of power — is different and should be treated differently. If it turns out the settlements were with subordinates, questions will be raised about why this punishment of removal from public ministry was not applied earlier.

The resignation comes in the twilight of McCarrick's life. The last time I saw the cardinal, it seemed clear to me that his once formidable intellectual faculties had begun to fail, a process that has continued according to mutual friends. It would be easy, and wrong, to think "Poor Cardinal McCarrick." That is the sentiment that got us into this mess in the first place, the fact that, when confronted with allegations that a priest had abused a minor, too many bishops had as their initial reaction the thought "poor Father." It is understandable, but not pardonable, that the culture of clericalism, like the culture of the military, inclined those who belonged to think first of their own.

But priests and bishops are shepherds, they are there to protect the flock. Their first thought should have been for the harm done to the victim, not the scandal that would surround the perpetrator. Protecting the perpetrator and not the victim violated all their theology of ministry and apostolic authority. It violated their sacramental leadership of the community. It has almost killed the church in this country.

Changing that culture has not been easy. Then-Bishop Donald Wuerl's 1993 decision to challenge a ruling by the Vatican, ordering him to reinstate Fr. Anthony Cipolla, who had been credibly charged with sex abuse of a minor, was one of the first markers along the road to conversion. The enactment of the Dallas Charter and the resignation of Cardinal Law, both in 2002, were additional markers. The removal of Fr. Marcial Maciel as head of the Legionaries of Christ and the establishment of the Commission for the Protection of Minors at the Vatican were further markers along the road to conversion. Yesterday's news was the latest in a long series of incidents that together constitute a reckoning.

That road of conversion is not complete. In some sense, it never will be. Our procedures can hold people accountable, but there is something uniquely dark in a human heart that seeks to take advantage of a child's innocence for sexual gratification. This side of the eschaton, we will never understand fully why some otherwise good and successful and humane and loving people nonetheless do such a horrible thing. All we can do is try and prevent it as best we can and hold those who do it anyway accountable.

The Holy See's verdict against McCarrick is another sad, but necessary, milestone along the road of conversion for the church. No matter what other issues challenge the church, no matter which personalities get embroiled in this sex abuse ugliness, let us never lose sight of the need to continue to pursue the path of conversion. Say a prayer for the cardinal, to be sure, but say a prayer first for his victim.

Papal Mass in Washington will be in Spanish