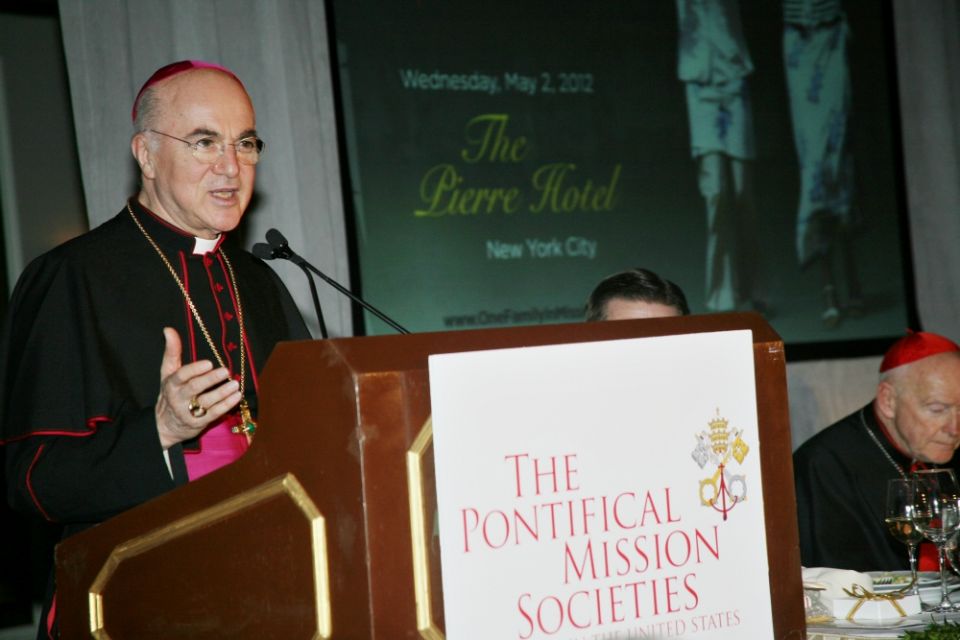 All this summer, combating wacky right-wing conspiracy theories felt like an endless game of whack-a-mole. Now, as the cool winds of autumn cause the red and orange leaves to rustle and fall to the ground, the generic has become the specific and discriminating journalists are called upon to play the game of Whack-a-Viganò.

You would have thought that the letter from Cardinal Marc Ouellet, the conservative prefect of the Congregation for Bishops, chastising Archbishop Carlo Maria Viganò and characterizing his previous testimonies as a "political frame job" might have caused the ex-nuncio to rethink his stance. Ouellet, appointed to his post by Pope Benedict XVI in 2010, had worked closely with Viganò and he was not conspicuous in his support for some of Pope Francis' reform efforts. His letter must have stung. It should have invited a reassessment by the Vatican's most famous crybaby. It did not.

Instead, Viganò has come out with a third "testimony" and the third time was not the charm. Viganò begins with his usual self-promotion, explaining that his is the voice of conscience and anti-corruption. He notes he is issuing this third epistle on the feast of the North American Martyrs and he clearly sees himself as the victim of persecution, as he did in the famous Vatileaks memos.

But Viganò also unintentionally reveals his true motives in this third screed in a way he did not previously. He writes:

I have been accused of creating confusion and division in the Church through my testimony. To those who believe such confusion and division were negligible prior to August 2018, perhaps such a claim is plausible. Most impartial observers, however, will have been aware of a longstanding excess of both, as is inevitable when the successor of Peter is negligent in exercising his principal mission, which is to confirm the brothers in the faith and in sound moral doctrine. When he then exacerbates the crisis by contradictory or perplexing statements about these doctrines, the confusion is worsened.

So, he spoke not because his concern for the victims of clergy sex abuse at long last got the better of him. He spoke because he didn't like the pope's approach to theology, especially moral theology. And Viganò clearly thinks he can and does stand in judgment of the pope. This, from the man who labeled Kentucky clerk Kim Davis a conscientious objector and presented her to the pope as such, even though it was obvious to all that Davis went to jail not because the government refused to let her perform her religious obligations but because she tried to force her religious obligations on others through the exercise of her civil office.

Davis must have appealed to Viganò because she was an anti-gay bigot, and while his earlier epistles also betrayed more than a whiff of anti-gay fervor, this third iteration is the most vulgar in its prejudice. Without citing any scientific data, he frets about "the underlying reason why there are so many victims, namely, the corrupting influence of homosexuality in the priesthood and in the hierarchy. ... This is a crisis due to the scourge of homosexuality, in its agents, in its motives, in its resistance to reform. ... It is well established that homosexual predators exploit clerical privilege to their advantage."

Scapegoating minorities has a long and ugly history. Writers as thoughtful as Kenneth Woodward, in the pages of Commonweal, wrote a little too breezily for my taste about the purported existence of "networks" of gay clergy, "lavender lobbies."

I do not doubt that in the face of suspicions and bigotry, many minorities develop ties with each other for mutual support. But, in my experience, some gay clergy are ultra-liberal and others are ultra-conservative, and so the idea that some kind of common ideological or political agenda would spring from a common awareness of themselves as gay clergy is preposterous.

Besides, the ugly history of such claims — "The Jews all stick together," for example — should give anyone pause about raising such concerns without more proof than either Viganò or Woodward offers.

The other lie that Viganò perpetuates that must be confronted is the idea that there were sanctions leveled against now-former Cardinal Theodore McCarrick by Benedict XVI and that Francis lifted those sanctions and afforded McCarrick great influence. On this latter point, Ouellet's letter is definitive, noting, "I have never heard Pope Francis refer to this so-called great adviser of his pontificate for appointments in America, although he does not hide the trust he accords to some prelates."

Ouellet's definitive rebuttal does not keep writers at the National Catholic Register from repeating Vigano's allegations, even the most wild ones, and speculating that they might be true. Question for Joan Desmond: When, precisely, did McCarrick's career even overlap with that of Cardinals Blase Cupich or Joseph Tobin such as to warrant this idea that he was their patron? He barely knew them. 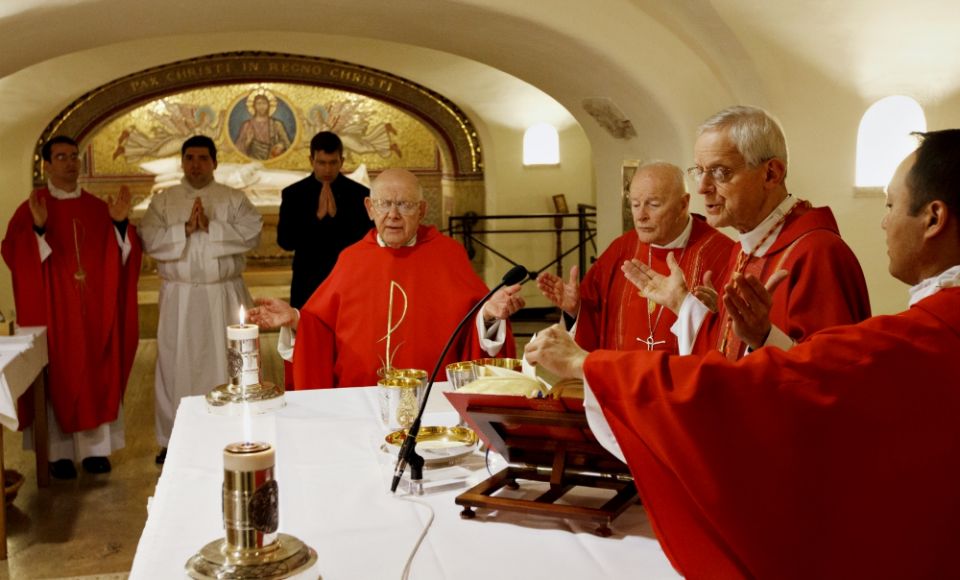 U.S. bishops, including then-Cardinal Theodore McCarrick (third from right), celebrate the Eucharist in the crypt of St. Peter's Basilica during their January 2012 "ad limina" visits to the Vatican. (CNS/Paul Haring)

And while Viganò now backtracks from his initial charge that there were canonical sanctions leveled against McCarrick, and now admits it was more or less mere advice to keep a low profile, the fact of the matter is that even this mere advice was not followed by Benedict himself. We have seen the pictures of McCarrick celebrating Mass in St. Peter's after these supposed sanctions were decreed. We have seen the video of Benedict greeting McCarrick with all the other cardinals on his last day as pope in 2013. Cardinal Jorge Bergoglio would have seen that also, as he was in the room.

Viganò may have wished for stronger sanctions against McCarrick. He may have wished they were enforced. Despite the video of Viganò praising McCarrick, he may have really hated him. But to expect a new pope to enforce sanctions that did not really deserve the name sanction, and which were never enforced in any event, is expecting a bit much. Oh, wait. It was Francis who removed McCarrick from public ministry and ordered him to a life of prayer and penance.

I assume Viganò enjoys this limelight. He is acting as a small and bitter man, who would rather destroy the church he pretends to love than let people he feels have wronged him lead it in ways he does not approve. Put differently, he wants his toys back. That was the gist of his letters to Benedict back in 2011. That is the gist of these frantic lies dressed up as testimonies he issues today. He has become a pathetic spectacle.