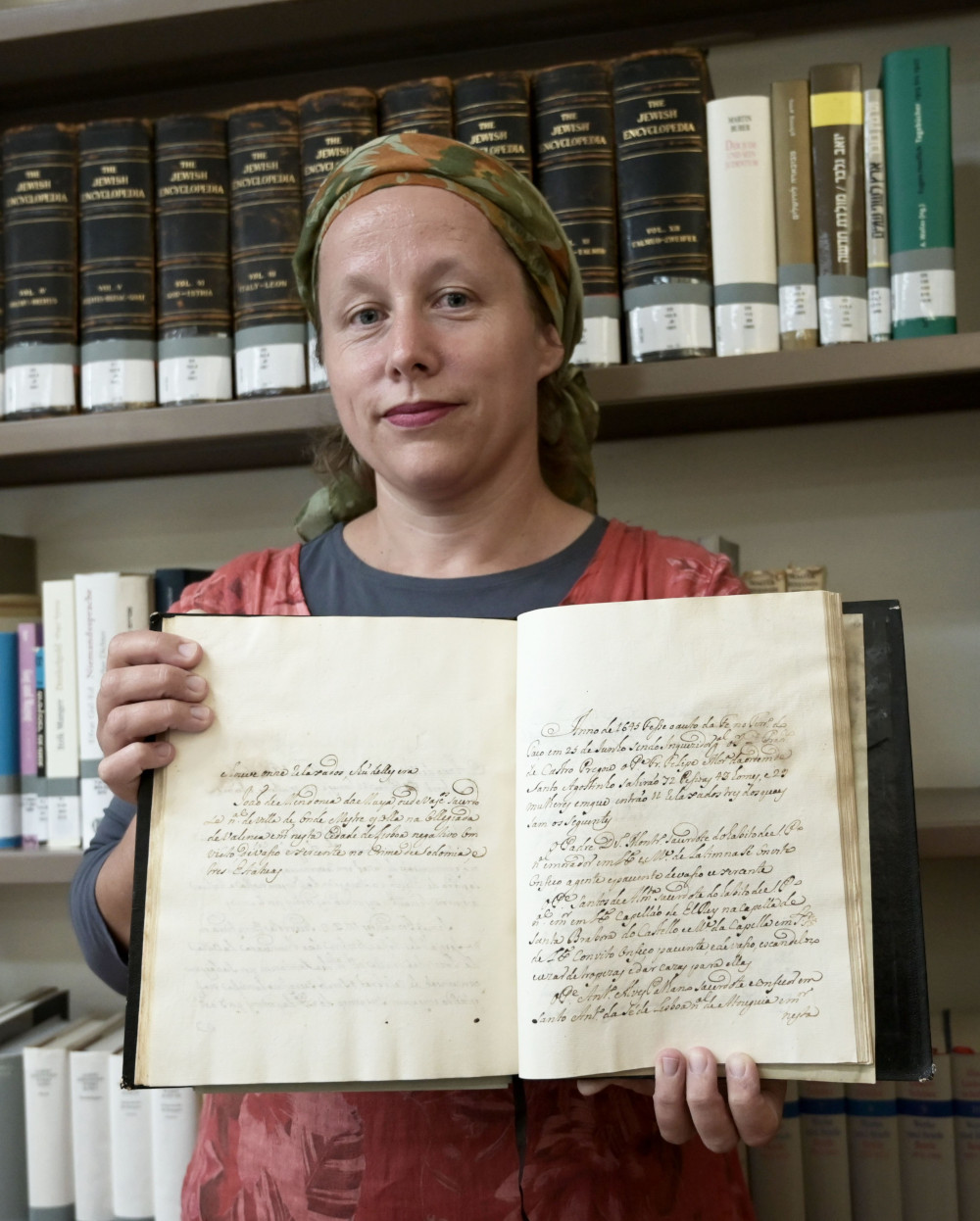 Pnina Younger, archivist at Central Archives for the History of the Jewish People at the Israel National Library, holds a rare 18th-century manuscript with details of the Portuguese Inquisition in Jerusalem July 19, 2022. (CNS photo/Debbie Hill)

Rare documentation of the Portuguese Inquisition with detailed information about the sentencing trials which took place 500 years ago have been digitized for the first time in the Central Archives for the History of the Jewish People Jerusalem's National Library of Israel.

The documents include printed versions of sermons preached by two priests at the end of the trials they presided over and a bound 60-page manuscript from the 18th-century that documents the first 130 years of the Portuguese Inquisition tribunal's activities.

The trials mainly occurred in Lisbon, with a brief mention of trials in Tomar.

Written in Portuguese, the manuscript holds information about trials conducted by inquisitors from 1540 to 1669 against Jews newly converted to Catholicism who were accused of continuing to secretly practice Judaism. Included are details of the trials including dates, names of priests who participated and numbers of victims sentenced in each one.

The document is known in English as "An Accounting of All the Autos-da-Fé that Took Place in Lisbon."

Autos-da-fé, or acts of faith, were public spectacles in which the sentences of Inquisition victims were read and executed by the authorities.

Those summaries were later bound into a volume in the 18th century as a memorial to the cruelty of those trials, she explained. The volume also includes a summary list of the trials written on separate paper which she believes was compiled in the late 19th or early 20th century based on the handwriting and the type of paper used.

The Portuguese title on the binding of the volume translated into English reads: "These hypocritical acts of faith, practiced without mercy, were the work of old clergy, only to make people miserable."

In 1536, the Catholic Church initiated the Inquisition in Portugal following a mass influx into the country of "anusim," Jews who were forced to convert to Christianity in fleeing the Spanish Inquisition. The Portuguese Inquisition included particularly cruel punishments often conducted before large crowds that gathered to watch. Trials ceased after about 250 years, although Portugal's Inquisition was not officially abolished until 1821, Younger said.

Digital copies of the two printed sermons soon will be available on the National Library of Israel's website at www.nli.org.il/.

The sermons were an important part of the sentencing trials and were not only directed to the victims, but also meant as a form of discipline for the public who came to observe the autos-da-fé, she said.

One of the printed sermons was preached June 26, 1645, at an autos-da-fé by Augustinian Father Phillippe Moreira. The summary of the event is found in the bound volume, Younger said, opening the volume to the summary page where Moreira’s name and the date can be clearly seen.

This autos-da-fé is also listed in the separate summary list, which notes that 11 of the 72 people tried under the priest had been sentenced to burning at the stake, Younger said.

The documents had already been part of the archives' collection for some time and had been catalogued, she said, but came to light once again in the framework of the archives’ re-cataloguing and digitization of its files and documents.