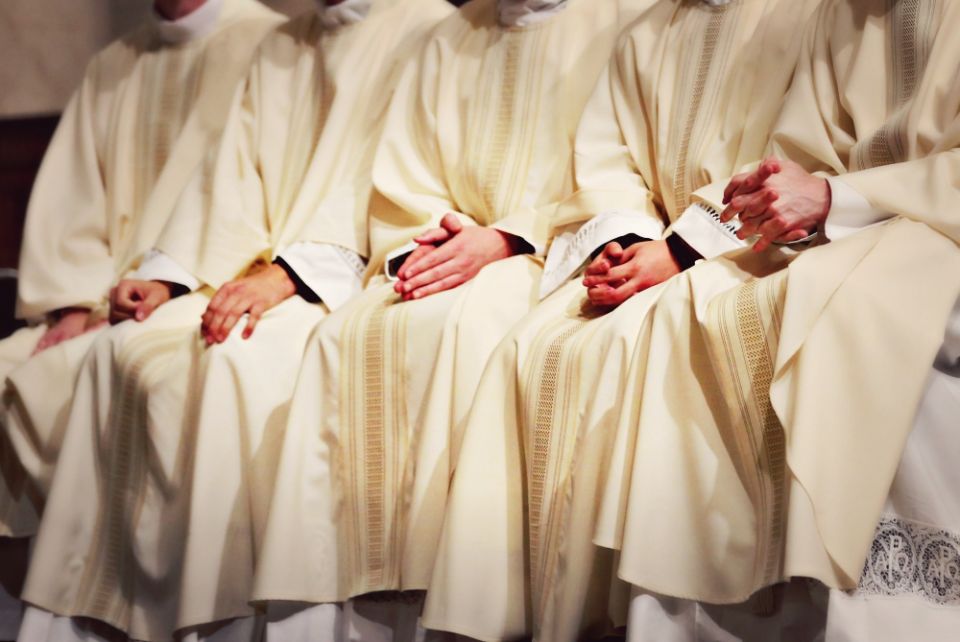 It is time for the U.S. Conference of Catholic Bishops to issue a standard sign to be posted in every chancery office in the country, just outside the bishop's door, reading:

IT'S THE CLERICAL CULTURE!

It is time to be done with the breathless wonderment at whatever new revelations show one more holy and wonderful priest has been, in a hidden life, abusive of children, or women, or seminarians, or just a liar about what he knew or didn't know, did or didn't do.

Opus Dei priest Fr. C. John McCloskey III, for whom the prelature paid a $977,000 settlement to a woman who accused him of sexual misconduct, is the latest to cause former associates and friends to go all aflutter with "How could he have?" And "How did we not know?" And "Why didn't those who did know speak up?" And "How could someone like that also do so much good?"

He could do such things, first of all, because he is human, all that nonsense about ontological differences to the side. Human frailty is not a function of theological or political ideology. Archbishop Rembert Weakland and Trappist Fr. Thomas Merton, luminaries of the Catholic left, for instance, were also examples of lives that combined great goodness with sexual indiscretions profoundly contradictory to their station in life. We are all capable of good and evil. That's the easy part.

The answers to the other questions reside primarily in understanding the culture in which all of those actors, McCloskey included, operated: the Catholic clerical culture. It is highly secretive, highly privileged, believed to be distinctive from the rest of human kind, allegedly celibate and, until recently, enjoying from members of the Catholic community as well as from civil authority in this country a level of deference that is normally reserved for the highly privileged. It is not without consequence that for too long that kind of deference extended to most of the media.

The old culture dies slowly and unevenly. McCloskey's manipulative behavior with vulnerable women was certainly, in hindsight, telegraphed in things he wrote and in a series of interviews done for an ultraconservative presentation on marriage preparation for Catholics. For the discerning, red flags were popping everywhere (and YouTube provides abundant examples), but the sirens are blaring and lights are flashing in one particularly weird segment that can be found here:

Fr. C. John McCloskey - Seeking A Woman Who Wants To Be a Wife

McCloskey is explaining to the unseen interviewer his understanding of why "Catholic men, truly Catholic men" take off for places like Latin America and the Philippines, "where you can find, fairly easily, wonderful women who are — pardon the expression — submissive in a healthy sense, and that just love being women and just love being mothers and love being spouses. Not that they're unintelligent or unattractive or even have a good education. But they recognize that as women they have gifts that men don't have, above all that possibility of conceiving and nurturing children that is the most important function in any family."

You see, he explains, in those regions of the world, while feminism has made "inroads," it is nothing like it is here in the United States. So that's why these truly Catholic men who "cannot find a good Catholic American woman who they would feel comfortable with" go searching for properly submissive women elsewhere. While those same men may not have looked hard enough around the home turf, often American women they find attractive are interested in careers, he asserts, not staying home and raising children.

That is the language and thinking of someone who became the face of one of Pope John Paul II's favorite organizations. McCloskey was a perfect model of what the late and hastily sainted pope saw as "heroic priesthood."

So was Thomas Williams, the face of the utterly corrupt Legionaries of Christ, another favorite organization of John Paul, who fathered a child and eventually left the priesthood after the reports became public in 2012. The problem for the community is not so much broken vows, but that the culture hid that reality for years. The organization and its very visible spokesman continued asserting a spirituality of absolutes and superiority as if nothing was amiss. That was the fraud perpetrated on the community.

The disgraced and disgraceful Marcial Maciel Degollado, founder of the Legionaries of Christ, a serial pedophile who abused his own young seminarians and who also fathered two children, is in a category all to himself. Yet the culture not only tolerated him but advanced his demented ideas about leadership and priesthood until the dimensions of his fraud and corruption could no longer be hidden.

McCloskey and Williams were out front, absolutely certain, media-savvy Catholic TV personalities and possessed of all the answers one might need. They were the charm and the smilingly urbane face of the new evangelization. They were thoroughly indoctrinated with John Paul's ideas about the meaning of ordination and the pope's strange and strained insights into women expressed in his personal writings and a series of sermons that he delivered on his "theology of the body."

McCloskey for a few years personified that muscular priesthood. Characterized in a New York Times headline as "An Opus Dei Priest With a Magnetic Touch," the people he drew into the community were high-profile conservatives, politically and economically well-placed and powerful. There was a genuine appeal for many in his highly dualistic and rigorist, not to mention antifeminist, approach to the faith.

We are paying dearly for all of that right now. The peculiarities that came with John Paul's notions of priesthood — his insistence on rebuilding a cult separate and apart from ordinary people and the utter lack of judgment he showed in choosing his models for that project — became deeply woven into the fabric of an already corrupted clerical culture. What he advanced actually reinforced the worst characteristics of the culture.

It is not the sins of the individuals that should now be the focus. All humans fail; we are all capable of deception and worse. It is the institutional corruption that they came to represent. The failings hidden for years by the institution, in the case of McCloskey, Williams, Maciel and others. The power of money, in the case of Maciel and, more recently, of former Cardinal Theodore McCarrick, to buy them cover in the Vatican. The refusal on John Paul II's part, time and again, to listen to serious and credible allegations against Maciel and other abusers. He set the template in this era of scandal for how church leaders should proceed.

It is, indeed, the clergy culture that is at the heart of the church's problems. It is in dire need of radical reform.

A version of this story appeared in the Jan 25-Feb 7, 2019 print issue under the headline: The lesson of McCloskey’s downfall .

'It's our church, too': Conference to focus on need for women's leadership