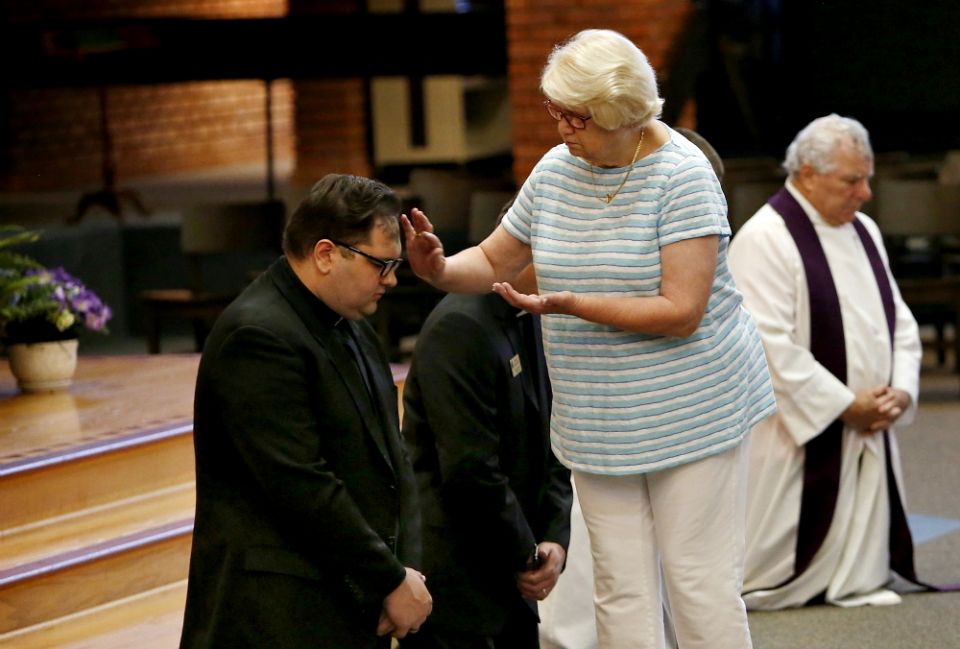 A woman administers ashes on the forehead of a priest during a prayer service for repentance and healing for clergy sexual abuse Aug. 22 at Our Lady of the Brook in Northbrook, Illinois. (CNS/Chicago Catholic/Karen Callaway)

It was about 10 years ago and I was in heated conversation with a priest. Both a good friend and good man, this priest was explaining to me where Christ was calling us to forgiveness in the clergy abuse crisis.

I agreed with him, but also became exasperated because he wanted to immediately move to reconciliation and closure without addressing the anger, frustration and betrayal that lay Catholics were feeling.

Losing my patience, I finally blurted out: "If I ever found out that a pedophile — in collar or not — was abusing one of my kids, I would beat him with a baseball bat."

That caught his attention. He understood that my words were not rational — that they were born from visceral, unfiltered feelings. He also understood that those feelings really mattered. So, he started to listen. Really listen. That meant so much to me.

How I wish that more bishops (including Pope Francis) were more like that priest: willing to truly listen to the anguish of the laity as the horror of this crisis continues to rip us apart. The response we usually get is tone-deafness, even as the evidence of the twin evils of abuse and cover-up pile up. There has been no greater evil in the history of the Catholic Church than the sacrifice of children to priest-pedophiles. Why don't these guys get that?

Now we have the Pennsylvania grand jury report, which is both shocking and not shocking. We continue to be shocked by the graphic descriptions of priest-pedophiles abusing kids in unspeakable ways and how bishops perpetuated evil through their self-serving actions.

We are not shocked, however, that this happened in Pennsylvania. Because we now know it was happening everywhere. The reports keep coming out — and will continue to come out — because church leaders keep hiding information while hoping it all just goes away.

But, of course, it is not going away.

This is never going to move to reconciliation and closure until the church finally summons the courage, compassion and humility to address this crisis head-on. In other words, live the words that Jesus spoke. And by "church," I mean all of us. Every Catholic (lay and clergy) is called to confront the evil of abuse. Those who decide to do nothing have decided to condone this evil. There are only guilty bystanders at this point. It's time to get to work.

First, bring the sins committed and hidden in darkness into the light. There must be a very public accounting of all the abuses that occurred and all the cover-ups that protected the abusers. Some bishops, to their credit, have opened abuse files and acknowledged wrongdoing by church leadership. Every bishop in every diocese must do the same.

Second, seek forgiveness from all who have been injured. I recall a Jesuit provincial who made it his duty to reach out to abuse victims and offer personal apologies. That's the job all bishops now have, and that includes Francis. This outreach to victims should include a "Mass for Mercy" — a public acknowledgment of grave sin and prayers for all who have suffered so horribly. True, many victims would not welcome this outreach — their Catholic faith was killed when those priest-pedophiles murdered their childhood. Ask for forgiveness anyway — grace may follow.

Third, and finally, let's do everything we can now to make sure that this never happens again. Lay Catholics should examine the written document that outlines the powers of their local diocesan review board. The U.S. bishops' Charter for the Protection of Children and Young People requires every diocese to have a review board that advises the local bishop on abuse issues. The effectiveness of these boards, however, is entirely dependent upon their explicit powers, and those vary from diocese to diocese.

A couple years ago, a few of us in Seattle found out that there was no requirement that allegations of abuse and/or inappropriate behaviors be reported to our Archdiocesan Review Board. This reporting gap meant that the review board tasked with advising the archbishop would not necessarily know when specific charges of abuse were reported to the archdiocese. We asked our archbishop to include this requirement in the board powers. Good news and bad news came from this request.

The good news was that our archbishop and the review board agreed to change the powers to include this mandatory reporting requirement. It was deeply affirming to work with an archbishop who shared "never again" goals with local laity and was willing to put that commitment in writing.

The bad news was the discouraging reaction we received from some local lay Catholic leaders. They viewed our attempts to strengthen the review board as an attack upon the church itself.

We are a church of service, but that should never be confused for servility. Lay Catholics must overcome the blind deference that helped perpetuate the abuse crisis/cover-up and, instead, commit to ensuring that the actions of the church align more closely with its mission.

Frustrated that the church has drifted so far from the mission of Christ? Do something about it. Laity in every diocese in this country should unite and petition their local bishops to disclose all records of abuse and cover-ups, beg forgiveness from abuse victims (including a public "Mass for Mercy"), and ensure that local review boards have sufficient powers so that this horror will never happen again. (In each of its last five annual reports to bishops, the National Review Board has warned against "a tendency for complacency" and an inattention to details.)

Petition out of love for the church, not in opposition to the church. This could be the beginning of the end or a new beginning. "Rebuild my church," were the words our Lord spoke to St. Francis of Assisi (a layperson at the time). Our Lord is speaking those words to us again.

[Kent P. Hickey is president of Seattle Prep, a Jesuit-sponsored high school in Seattle, and is the author of Finding Your Posts.]

Commentary | Every Catholic, lay and clergy, is called to confront evil of abuse