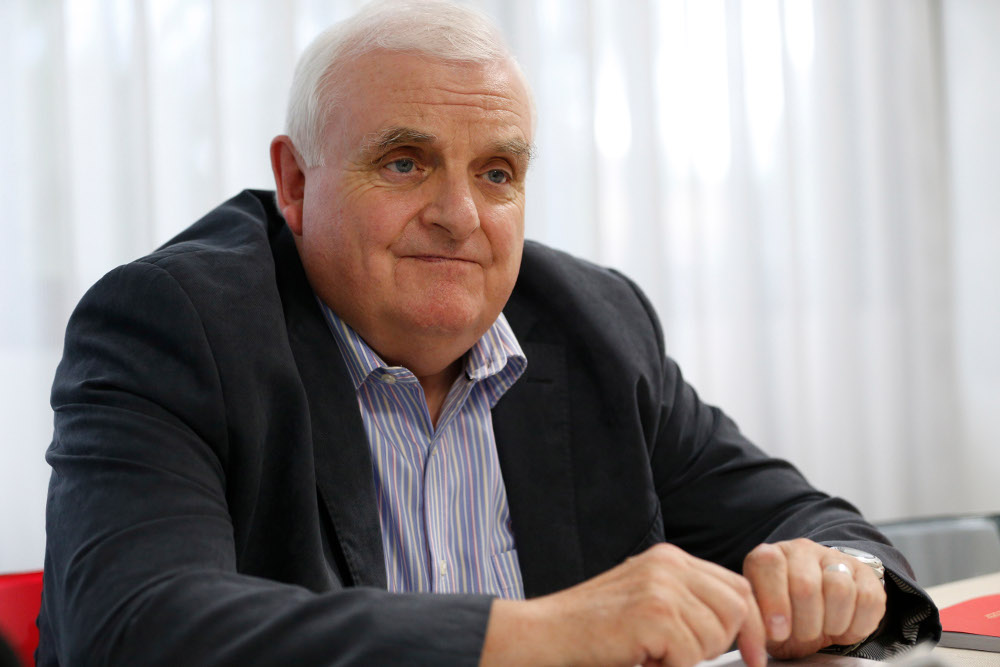 Bill Kilgallon, a member of the Pontifical Commission for the Protection of Minors, is pictured during an interview in Rome Sept. 21, 2017 (CNS/Paul Haring)

Bill Kilgallon is looking back on his three years as a member of the Pontifical Commission for the Protection of Minors with sense of achievement, alongside a certain sense of frustration.

Kilgallon's three-year term on the commission came to an end last year, and he was not reappointed to a second term, an outcome he had anticipated.

When asked to point to the achievements by the commission in its first term, he pointed first to the establishment of the body itself, which involved the bringing together of people from different professional backgrounds from all around the world to work as a team.

The commission did its work by way of working groups and Kilgallon chaired the group dealing with guidelines — starting with those for the prevention of and response to sexual abuse in the Church.

He described the completion of templates for guidelines to assist bishops' conferences around the world to use as "a very significant piece of work."

Other achievements by the commission were recommendations on changes to church law and practice on areas such as dealing with complaints of abuse, time limits for abuse cases and a better definition of a "vulnerable adult."

Kilgallon said that progress was also made in the "formation and education of church leadership." He paid tribute to the achievement of the working group led by Jesuit Fr. Hans Zollner, in having "written into the structure for training of priests that there must be specific safeguarding training in the curriculum, as well as much more attention to really good screening and work with people who are going into priesthood and religious life."

Another working group, led by former commission member and clerical abuse survivor Marie Collins, made "good progress" on how the church should listen to the voices of survivors. "Another group was looking at education in the wider sense of communities and convened a conference last year in Rome of people working in educating communities about safeguarding.

"So there were some significant achievements, but it was very much at the beginning of work at the commission."

Other significant work was being started at the end of the commission's first term, Kilgallon said.

This included issues like how to deal with offenders in the church and how to respond to children of priests (conceived when the priest was supposed to have been living a celibate life).

But some aspects of his three years with the commission frustrated Kilgallon, who, at the same time, was working as the national director for the National Office of Professional Standards in New Zealand. (His five-year term in this role also expired at the end of last year).

"As is often the case in any big organization, the commission met some pushback, particularly within some of the departments at the Vatican," Kilgallon said.

"The Congregation for the Doctrine of the Faith was not at all helpful — at times was obstructive. And that obstruction led to one of the best commission members leaving in terms of Marie Collins. It also probably led to the prefect of the congregation not being reappointed [by the pope]."

"The CDF were not helpful in drawing up the [guidelines] template.

"They had done some work on guidelines before, because it was through them that the instruction went out [to bishops' conferences] to have guidelines and we wanted them to share with us their work, but that was a step too far for them."

Kilgallon said he had worked in advisory roles to government before, in the United Kingdom, and "it is not uncommon for departments to take a very defensive view when an outside group of 'experts' are called in to look at an issue. It is a fairly normal institutional reaction."

"It doesn't mean it is not disappointing when you meet that reaction, but it is not unexpected."

Kilgallon was also unimpressed with the "hiatus" that took place in the Vatican between the end of the terms of the initial members of the commission and the announcement of new members and the reappointment of some of the former ones.

"There could have been a seamless hand over," had the process of refreshing the commission been done properly. But there was "a big gap where nobody knew what was happening", leading to the impression "that it wasn't being treated seriously" by the Vatican, Kilgallon said.

He always thought the commission would continue, but "it wasn't helpful to have that gap."

"There should be a mixture of continuity and new blood in any commission or any board, it is fairly standard practice," Kilgallon said.

Now Kilgallon is looking forward to spending more time with his grandchildren during his retirement.

But, he said with a smile, "this is my third retirement."

"The Congregation for the Doctrine of the Faith was not at all helpful — at times was obstructive. And that obstruction led to one of the best commission members leaving in terms of Marie Collins. It also probably led to the prefect of the congregation not being reappointed [by the pope]."

He doesn't rule out being asked for input into the future New Zealand Royal Commission of Inquiry into Historical Abuse in State Care; he was consulted by government into the scope of the inquiry.

"Although they didn't follow my advice on that," he added. "It is right to focus on state care initially and it is really good that the Government has set up an inquiry as they said they would and made it a priority. It is also good they made it a Royal Commission because that signifies how important it is.

"But I think there are a large number of people who suffered abuse in other settings who are very disappointed in the limited scope and I think they will, and quite rightly will, continue to ask for their voice to be heard. I think the strong feeling, and I've had a lot of contact with survivor groups as well as individual survivors, and there is a very strong feeling amongst them that they are being sidelined again and silenced.

"This is a once in a lifetime opportunity to have a look across the board."

[Michael Otto is editor of NZ Catholic, the national Catholic newspaper in New Zealand, published by the Catholic bishop of Auckland.]

Editor's Note: This report first appeared April 24 in NZ Catholic under the headline "Kiwi's three years on Pope's commission." NCR is using it with permission.