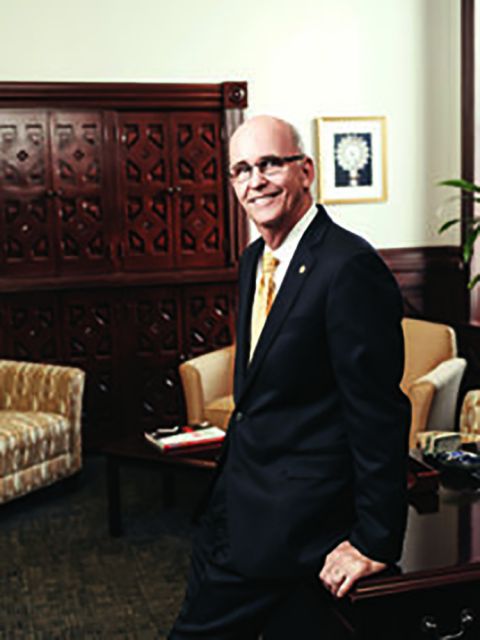 Thomas M. Mengler, president of St. Mary's University in San Antonio, is pictured in his office in this 2017 photo. On June 10, 2020, the U.S. Conference of Catholic Bishops announced that Mengler was one of four new members to be appointed to the National Review Board, which advises the bishops' Committee on the Protection of Children and Young People. (CNS/courtesy St. Mary's University)

Washington — The National Review Board, the all-lay group that monitors dioceses' performance in dealing with sexually abusive clergy and creating a safe environment for children throughout the church, has four new members.

The new members are:

— James Bogner, retired senior executive special agent for the FBI; he also serves on the Archdiocesan Advisory Review Board and Ministerial Conducts Board for the Archdiocese of Omaha, Nebraska.

— Steven Jubera, assistant district attorney for Mississippi's 17th Judicial District; he also serves on the Review Board for the Diocese of Jackson, Mississippi.

— Thomas M. Mengler, president of St. Mary's University in San Antonio; he previously served on the board of directors of Catholic Charities of San Antonio and was co-chairman of the Lay Commission on Clergy Sexual Abuse of Minors in the Archdiocese of San Antonio.

Gomez wrote in a letter to the new members that the National Review Board "plays a vital role as a consultative body assisting the bishops in ensuring the complete implementation and accountability of the 'Charter for the Protection of Children and Young People.'"

He also reminded the new members that the entire church, especially the laity, "needs to be engaged in maintaining safe environments in the church for children and young people."