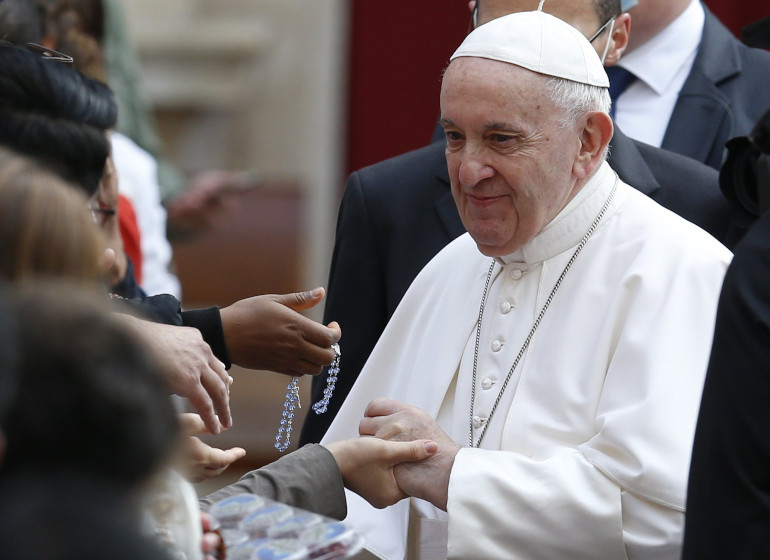 Pope Francis greets people during his general audience June 9 in the San Damaso Courtyard of the Apostolic Palace at the Vatican. (CNS/Paul Haring)

Pope Francis on June 10 declined to accept the shocking resignation offered by German Cardinal Reinhard Marx over the failures of the Catholic Church's response to clergy sexual abuse but admitted the global institution's handling of abuse over decades had been a "catastrophe."

In a poignant letter to Marx, released by the Vatican, the pope said the whole of the Catholic Church is "in crisis" because of clergy abuse and said all its members "have to take ownership of history, both personally and communally."

Marx, one of the pope's closest advisers, had asked last month to be allowed to resign as the archbishop of Munch and Freising as a symbol of responsibility for what he termed the "systemic failure" of church leaders on abuse.

In a letter to Francis, which the cardinal released to journalists June 4, Marx said he wanted to "share the responsibility" for the way priests and bishops mishandled abuse cases. He also said he felt "personally guilty" for trying to protect the reputation of the church when dealing with victims.

In response, Francis told Marx on June 10 to instead continue on as archbishop. The pope referenced a story in Luke's Gospel in which Peter mistrusts Jesus' power and tells Jesus to depart from him.

"If you are tempted to think that, by confirming your mission and not accepting your resignation, this Bishop of Rome (your brother who loves you) does not understand you, think about what Peter felt before the Lord when, in his own way, he presented the resignation: 'Get away from me, I am a sinner,' " Francis told Marx. "Listen to the answer: 'shepherd my sheep.' "

Francis' letter to Marx, written over three pages in a brotherly tone in Spanish, appeared notable for the way it bluntly acknowledged the seriousness of the abuse crisis and the need for wide and substantial reforms.

"Burying the past does not lead us to anything," Francis said. "Silences, omissions, and giving too much weight to the prestige of the institution only leads to personal and historical failure, and makes us live with the weight of 'having skeletons in the closet.' "

"It is urgent to 'air' out this reality of the abuses and how the Church acted, and let the Spirit lead us to the desert of desolation, to the cross and to the resurrection," the pope said.

Francis told Marx that the only thing church leaders can do is tell God: "I have sinned" and "we have sinned."

The pope called Peter's phrase, "Get away from me, I am a sinner," "an inheritance that the first pope left the popes and the bishops of the Church."

Marx has led his archdiocese since 2007. He also serves as one of only seven members of Francis' advisory Council of Cardinals and as the coordinator of the Vatican's Council for the Economy, which supervises the financial activities of both the Vatican city-state and the offices of the Holy See.

The cardinal is 67 years old, eight years shy of the traditional retirement age of 75 for bishops.

As in many countries across the world, Germany's Catholic Church has been rocked by reports of clergy sexual abuse and cover-up by bishops. A 2018 report documented nearly 3,700 cases of alleged abuse over a 68-year period in Germany.

The public outcry from the report partially inspired the launch of the German church's "Synodal Path" initiative, a series of gatherings discussing contemporary issues and the future of Catholicism in the country.

The path has met with criticism from some more conservative church voices, who say it is too progressive on issues such as sexuality and women's leadership.

Marx, who led the German bishops' conference from 2012 to 2020, has been one of the key organizers of the synodal program. In 2019, he strongly defended the program from criticism by Cardinal Marc Ouellet, the head of the Vatican's Congregation for Bishops. Ouellet had said some of the topics up for discussion in Germany would impact the entire global church.

A version of this story appeared in the June 25-July 8 print issue under the headline: Francis rejects Marx's resignation; admits 'catastrophe' of abuse crisis.