Fraternity of the disgraced keeps growing 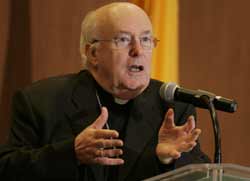 One decade ago, if astute observers had been asked to rate the best-connected political heavyweights among Catholic prelates, Cardinal Bernard Law of Boston would have been a popular choice. Archbishop Rembert Weakland of Milwaukee and Cardinal Godfried Danneels of Belgium would have done well in a poll of "most admired bishops among liberal Catholics," while Cardinal Darío Castrillón Hoyos of Colombia seemed a hot pick to be the first Latin American pope.

All four men seemed destined to be remembered as lions of their era. It's an object lesson in how quickly things can change, since today three have already become pariahs because of their roles in the sexual abuse crisis, while Danneels, now 77 and retired, is fighting to save his reputation from suffering the same fate.

How fair that assessment may be in any given case is almost irrelevant. For Law, Weakland and Castrillón, a negative public verdict is already a fact of life, and debate over Danneels shows that membership in this fraternity of the disgraced is far from closed.

Perhaps the most explosive question is whether that fraternity will eventually include the two popes whose reigns coincide with the sexual abuse crisis, John Paul II and Benedict XVI. Probably neither pontiff's reputation will be helped, though defenders of both men also have cases to make.

In the meantime, the reversals of fortune that are already faits accomplis suggest two conclusions, both of which seem clear enough, yet which remain stubbornly difficult for some people to grasp:

In the case of Danneels, he's come under fire for allegedly trying to cover up sexual abuse committed by a brother bishop, Roger Vangheluwe of Brugge, Belgium, against his own nephew between 1973 and 1986. On Aug. 27, a Belgian newspaper printed excerpts from a secretly recorded transcript of a meeting with the victim this past April, in which Danneels suggests waiting for Vangheluwe to resign rather than making the case public.

A Danneels spokesperson insisted that the cardinal had broken no law, and "acted in a morally irreproachable way."

For anyone who has followed Catholic affairs over the last half-century, Danneels casts a massive shadow. A former professor of liturgy at the Catholic University of Louvain, Danneels has usually been seen as a leading light of the European episcopacy, in the same rarified company as Cardinal Carlo Maria Martini of Milan or Joseph Ratzinger before his election as Pope Benedict XVI. People marveled that in an ultrasecular society such as Belgium, Danneels managed to win respect because of his calm, his self-deprecating sense of humor, and his keen intellect.

Yet depending on how things develop, most of that could be forgotten, as the lone narrative about Danneels becomes "just another bishop in denial." If so, he'll have plenty of company.

The Law and Weakland cases are already well-known to Americans, while Castrillón Hoyos has become a cautionary tale among Vatican insiders. Not long ago, he was a Roman powerbroker hailed by Colombian novelist Gabriel García Márquez as "this rustic man, with the profile of an eagle." Now, his name is whispered as a warning about how a career can collapse even more rapidly than it rose.

The triggering incident was a now infamous September 2001 letter Castrillón Hoyos dispatched to a French bishop, congratulating him for refusing to report an abuser priest to the police. When the letter became a cause célèbre earlier this year, Castrillón Hoyos's entire track record on the crisis was put under a microscope, and it didn't look good. What once seemed benign traditionalism took on a more sinister hue, as denial and complicity.

Facing a global chorus of outrage, a papal spokesperson effectively tossed Castrillón Hoyos under the bus, calling him an example of the obstacles then-Cardinal Ratzinger had to overcome in cajoling the Vatican into a more aggressive response.

Taken together, these cases make a single, stunningly obvious point: It can happen to anybody.

All this suggests a word to the wise for anyone in institutional leadership. If a crisis is brewing and you ignore it, don't count on getting the benefit of the doubt when the dam finally breaks. Whatever solutions you may have advanced on other fronts, your legacy will be as part of the problem.

Just ask anybody already on the list — this is one fraternity you don't want to join.

[John Allen is NCR senior correspondent. His e-mail is jallen@ncronline.org.]

Disagreement on why abuse warnings were ignored