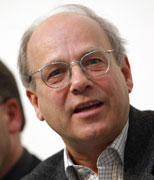 In January 2010, Jesuit Fr. Klaus Mertes, headmaster of the prestigious Jesuit-run Canisius College in Berlin, sent a letter to former students of the school informing them that two former priests had been accused of sexual misconduct with students. In the letter, he wrote that he was deeply shaken and ashamed because he had learned that “systematic abuse had taken place at the school over the years.”

Soon a whole series of abuse cases at other well-known Jesuit and Benedictine schools in Germany and in many German dioceses came to light. By spring, the revelations were coming from Austrian and Swiss church institutions.

Since then, 180,000 German and 87,000 Austrian Catholics have formally left the church. German-speaking Catholic Europe was engulfed -- in the words of Austrian Cardinal Christoph Schönborn -- in a tsunami of clerical abuse.

Mertes, 56, stepped down from his post at Canisius College in June. In July, he talked with Der Spiegel about clergy sexual abuse and the Catholic church.

Germany is in the final stages of preparing for a papal visit. For the Sept. 22-25 visit to his homeland, Pope Benedict XVI has scheduled 28 events and he is to deliver 17 public addresses. Mertes said he would like the pope to use the event to reach out to troubled German Catholics, but he doesn’t hold out much hope.

Many committed, middle-of-the-road Catholics are “deeply weary” and resignation has settled in, which explains the mass exodus of Catholics from the church, he told Der Spiegel.

Some people in the church aren’t alarmed by the exodus, however, he said. Certain circles actually welcome the fact that thousands are formally leaving the church in Germany. They regard it as “healthy downsizing” that enables “true Catholics” to be among themselves, he said.

Over the last 18 months, Mertes said, he has received masses of hate mail and letters accusing him of being disloyal, of splitting the church and of fouling his nest.

He expressed gratitude that Cardinal Georg Sterzinsky of Berlin had given him full backing from the beginning, while noting that other members of the hierarchy were not supportive. (Sterzinsky died June 30 at age 75.)

He recalled that Cardinal Angelo Sodano, dean of the College of Cardinals, had called stories about sexual abuse by clergy “petty gossip.”

“I was aghast that anyone could say that and I’m still deeply ashamed about that statement of Sodano’s,” Mertes said. He added that he was immensely grateful that Schönborn had openly contradicted Sodano.

Only recently a cardinal in the Vatican had said that Mertes ought to be thrown out of the church, Mertes told Der Spiegel.

“I owe everything to the church -- my faith, the prayers I pray, the liturgy I celebrate and the Gospel. The values I try to live by are the Gospel values. I will not to allow all that to be taken from me by a small clique of people who by vilifying me think they are doing the church a service,” he said.

“The Catholic church is more than just a circle of mobbing Catholics who act in the dark, who think even the slightest critical remark is disloyal and who denounce people who ask questions. ... My big worry is that the hierarchy will listen to them.

“The bitterest thing is that Rome accepts these denunciations. The informers are protected by being allowed to remain anonymous so they can continue to act in the dark. They get the significance the powers that be give them.”

Mertes said that he “can live with [personal attacks] but what I find worse is that part of the hierarchy who remain silent in the face of such attackers out of fear that they too will be attacked in the same way.”

“There are opportunists in the hierarchy who say nothing when this vociferous, self-righteous minority in the church speaks out,” he said.

The church, Mertes said, is ready for change, but church leadership is afraid. “The church leadership immediately fears that it will no longer be in charge of the discussion. It is afraid of losing authority. ... We as a church must learn to look at our church in a new way. We must clear up why there is this silence and what leads to it. That is the decisive question and the question the victims are asking.”

[Christa Pongratz-Lippitt is correspondent in Vienna, Austria, for the London-based Catholic newsmagazine The Tablet.]

Baltimore archdiocesan board creates policy on allegations against bishops