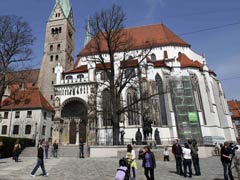 People stroll around the cathedral in Augsburg, Germany, in April 2010. (Reuters/Michael Dalder)

BERLIN -- By just about any measure, 2010 was not a luminous year for Germany’s Catholic church -- and the Protestants didn’t fare much better. Rocked by sex, physical abuse, and corruption scandals, an unprecedented number of German Catholics -- the most in postwar Germany’s history -- turned their backs on the church, formally renouncing their membership. Some switched to one of the Protestant churches, though those churches, in aggregate, also lost members.

Most affected were those southern German bishoprics implicated in the sex abuse scandals -- in Bavaria and Baden-Württemberg -- where leading Catholic figures, such as Bishop Walter Mixa of Augsburg, were forced to resign. In April, the 68-year-old Mixa, also the bishop of the Bundeswehr, Germany’s armed forces, stepped down amid allegations that he beat children at a Bavarian orphanage in the 1970s and ’80s. Further charges alleged that Mixa, during his tenure as a parish priest and head of the board of trustees for the orphanage’s foundation, misappropriated foundation funds.

The Mixa case came on top of revelations that in the 1980s, church authorities, including German-born Pope Benedict XVI, who at the time, as Cardinal Joseph Ratzinger, headed the Bavarian archdiocese of Munich and Freising, oversaw the reinstatement of a priest accused of molesting boys in a northern German parish. Upon resuming pastoral duties, the priest committed further abuses for years before being removed from his post for good.

Other accusations concerning physical and sexual abuse emerged almost daily early last year, including charges that Benedict’s older brother, a senior priest in Bavaria, had manhandled minors. Benedict was also seen as personally implicated in his past role as head of the Vatican’s Congregation for the Doctrine of the Faith, which led investigations into abuse before he assumed the papacy in 2005.

Victims’ lawyers publicly accused the pope of doing little to discipline church officials who allowed abusers to continue serving in ministry. At every step, church officials appeared to waver and backpedal rather than own up to the severity of the charges.

The wave of departures from the church appears directly related to the uproar of early 2010: The exodus was not only significantly higher in those dioceses implicated in the scandals, but they peaked in those months when the abuses came to light. In Mixa’s diocese, 11,351 parishioners had left the church by mid-December 2010, nearly double the number in 2009.

Yet other bishoprics also suffered disproportionately from the fallout, including Würzburg, Trier and Hamburg, places not directly in the line of fire in 2010.

“The scandals of 2009 and 2010 triggered the mass departures,” says Wolf Gunter Brügmann-Friedeborn of the grass-roots group Initiative Kirche von Unten. “But often they were the straw that broke the camel’s back. Many of these believers were already fed up with the German church’s anachronistic, authoritarian position on so many issues.” Brügmann-Friedeborn mentioned mandatory celibacy, the exclusion of female priests, and relations with Protestants as issues that concern many German Catholics.

Germany’s Protestant churches -- the Lutheran, Reformed (Calvinist), and United (Lutheran plus Calvinist) -- both suffered and benefited from the Catholics’ woes. Its overall membership continued to decline, as it has for years, largely because of Germany’s shrinking population and ever fewer young believers. Yet its representatives say that the controversies within the German Catholic church had a spillover effect: Believers left Protestant churches in order to express their discontent with Christianity in general. “We’re in the same boat with the Catholics,” Christian Tsalos, spokesperson for the Protestant churches in Baden-Württemberg, told the daily Der Tagesspiegel last month.

But the Protestants say they attracted some disillusioned Catholics. Although there are no figures, Protestant church officials, particularly in southern Germany, attest that many of their new members in 2010 are former Catholics. “Many [who came over] were frustrated by the inability of the Catholic church to initiate reform,” said Tsalos.

“This is a new development,” church sociologist Michael Ebertz told the weekly Sonntag Aktuell. “In the past, such people simply dwelt in a confessional no man’s land.”

The one confession in Germany to actually grow in net size in 2010 was Islam. According to the Central Institute Islam Archive in Soest, the number of Germans converting to Islam has increased steadily since the 9/11 attacks on the United States. Although the institute, which studies Germany’s roughly 5 million Muslims, provides no numbers for 2010, it confirms that this trend persisted throughout the year.

The decreasing numbers for Catholic and Protestant churches -- and their corresponding loss of prestige and moral authority -- has fueled an ever louder debate about the role of the Christian churches in Germany. In Germany’s constitution, there is no mandate for an official state church. Yet the Christian churches have representatives in official state and public bodies, such as media commissions and educational institutions. The churches’ privileged status includes a special “church tax” collected from believers by the state (as part of income tax) in the name of the churches, something that none of the other, smaller confessions -- or any other groups -- in Germany enjoy.

Brügmann-Friedeborn from Initiative Kirche von Unten notes that this tax is only one way that the German Catholic church collects revenue and maintains its status in Germany. In addition to private donations, the church is subsidized directly and indirectly by the state in many ways, such as through lucrative tax breaks, and the salaries of many church officials and confessional religion teachers. The churches receive significant state funding for providing domestic social services and for their foreign aid missions, such as the Protestants’ Brot für die Welt and the Catholics’ Misereor, which are active in the developing world.

“The German Catholic church is the richest in the world,” Brügmann-Friedeborn said, also noting its extensive holdings in property and real estate. A dip in taxes and donations as a result of dwindling membership will not have a significant impact on its domestic or foreign services, he says. “It’s not like the church will implode like the East German regime did when the wall fell. It’s very strong.”

[Paul Hockenos is a Berlin-based American author and political analyst who has written about Germany and southeastern Europe since 1989.]