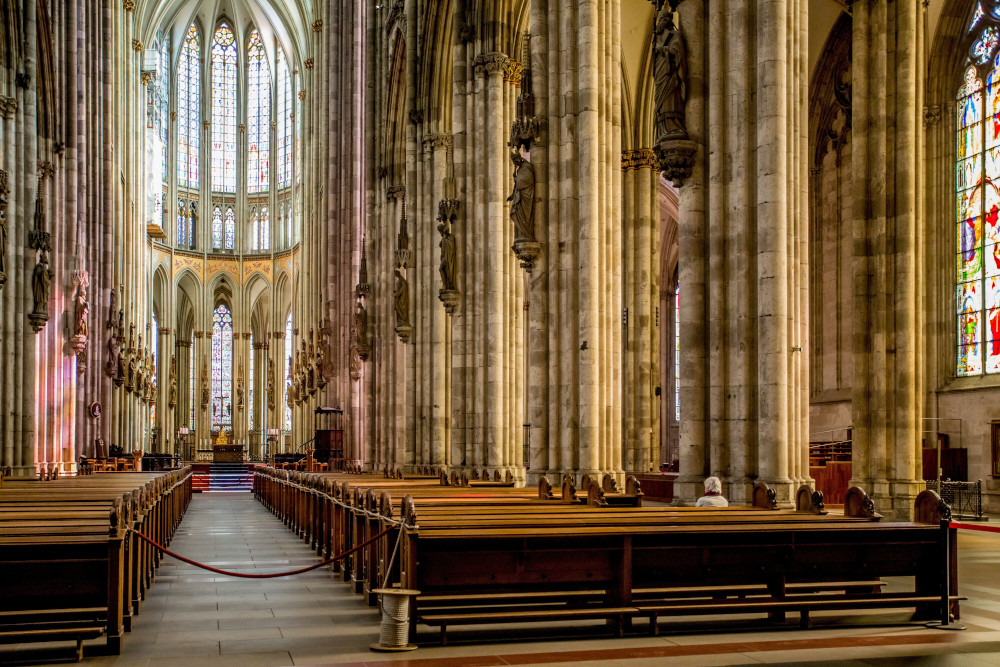 A woman prays in a pew at a nearly empty cathedral in Cologne, Germany, March 16, 2020. (CNS/KNA/Theodor Barth)

For the first time in the history of Germany, less than half the German population registered as members of one of the two large churches: Catholic and Protestant.

New figures on church membership resignations have come as a shock to many, reported the German Catholic news agency KNA.

"The figures for 2021 show the profound crisis in which we find ourselves as the Catholic Church in Germany. There is no way to sugarcoat it," said Bishop Georg Bätzing, president of the German bishops' conference.

The Catholic Church counted 21.6 million members last year, according to its statistics published June 27. That corresponds to about 26% of the population. The Protestant, or Evangelical Church in Germany, has 19.7 million members, which corresponds to 23.5%. Christians in Germany remain by far the largest religious community, but the membership exodus has skyrocketed.

KNA reported the aftershocks in the wake of the German abuse scandal are continuing with ever greater force despite all attempts at reform. The dioceses in Germany present their abuse reports separately and independently of each other, thereby triggering fresh negative headlines every few months.

Responding to a report on past abuses in the Archdiocese of Munich, retired Pope Benedict XVI bowed to pressure to admit he had made a false statement and spoke of an "editorial oversight." Pope Francis is increasingly unambiguous in his criticism of the reform consultations of the Catholic Church in Germany, which launched the so-called Synodal Path to regain lost trust, but so far the project has not had much positive impact.

The frustration is seeping into the core of parishes, where even members who have been active in the church for years are starting to leave. What is new is that the sense of shame and disgruntlement has even reached the leadership.

Hildesheim Bishop Heiner Wilmer called it disturbing "that not only people of little faith, but sometimes also people with a lot of faith are leaving the church."

Several vicars general who have quit have probably done so in part for this reason — and they hold the most powerful administrative posts in the church administration.

Andreas Sturm, who resigned as vicar general of Speyer and joined another church, explained his resignation in May by saying: "Over the years, I have lost hope and confidence that the Roman Catholic Church can really change."

His longtime counterpart in Munich, Fr. Peter Beer, spoke in a similar vein when he recently remarked on his retirement in 2020 that he had not stood a chance against the "protectors of the offenders." He said: "In the end I was barely able to change the system." 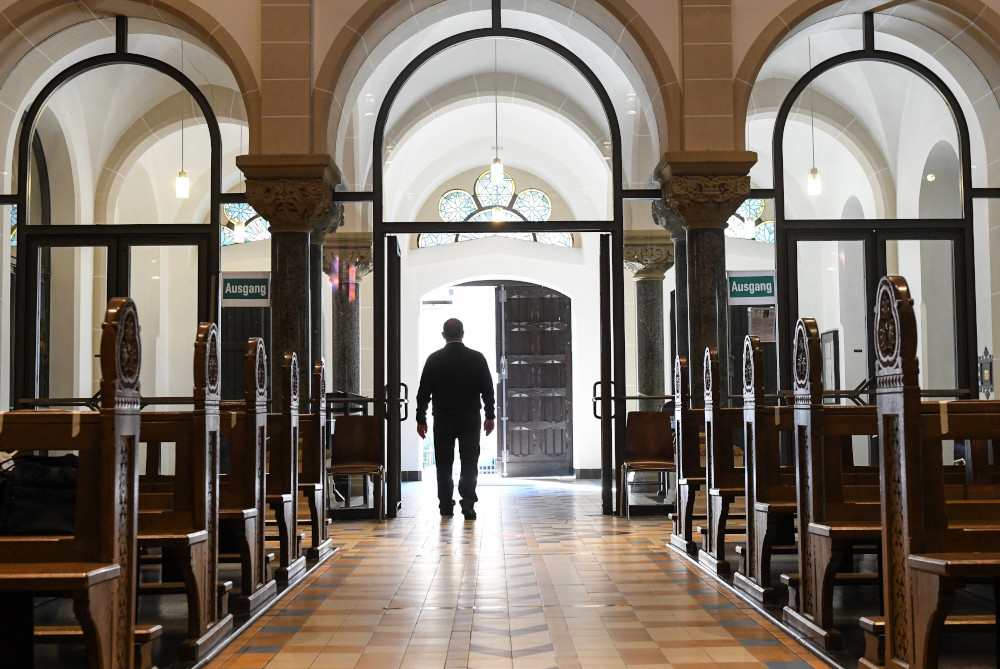 A man leaves an empty church in Bonn Germany, June 12, 2020, during the COVID-19 pandemic. (CNS/Reuters/Harald Oppitz)

In mid-June, the presumed suicide of a senior churchman shook the Limburg Diocese, after allegations of "assaultive behavior."

Christoph Kösters, a church historian from Bonn, said an earlier trend is now accelerating. For example, church attendance was already declining in the 1920s, when more than 50% of Catholics still regularly attended Mass on Sunday. Since the 1960s, secularization has accelerated sharply, and today, less than 5% of Catholics attend Sunday Mass regularly.

Even bishops are using terms like "stunned" and "shocked" to describe their response to these developments. The once-powerful faith community is almost in a state of paralysis at present, not least due to the tense limbo that has gripped the large archdioceses of Cologne and Munich, KNA reported.

The pope is taking a different approach in the Archdiocese of Cologne, which is mired in an unprecedented and deep crisis and, to the alarm of some bishops, is dragging their dioceses down with it.

Francis said he has asked Cologne Cardinal Rainer Maria Woelki for a letter of resignation but it waiting for the commotion to die down before he decides what to do.

In mid-June, German President Frank-Walter Steinmeier said in Berlin, "People want a modern, an open-minded church that participates in their everyday life that addresses their daily problems."

"The churches should stop revolving around themselves too much out of fear of their own loss of significance," he said.

On the ground, that is still happening in many parishes, although that gains little public attention, KNA reported. Many women in particular keep this grassroots work going, through child care, soup kitchens for the needy and language courses for refugees. And even in Catholic labor law, there has been progress that would have seemed unthinkable until recently.

A draft amendment states that, in the future, "the form of relationship and intimate sphere" of employees will no longer be grounds for dismissal. Until now, employment could be terminated if someone entered into a homosexual partnership or remarried at the registry office after a divorce.

But even overdue reforms won't halt the exodus overnight. Resignations are the culmination of a lengthy process and people have a wide variety of reasons for taking the step: from criticism of the handling of abuse and power, to the crusty church image, to a simple cost-benefit calculation ("don't make use of what it offers anyway.")

Steinmeier, on the other hand, believes that the churches will continue to play a role when "self-made world views" reach their limits. "When it comes to the old and ever new questions, namely what we can rely on in life and in death, what is needed is an attentiveness and a clear, understandable message," he said.