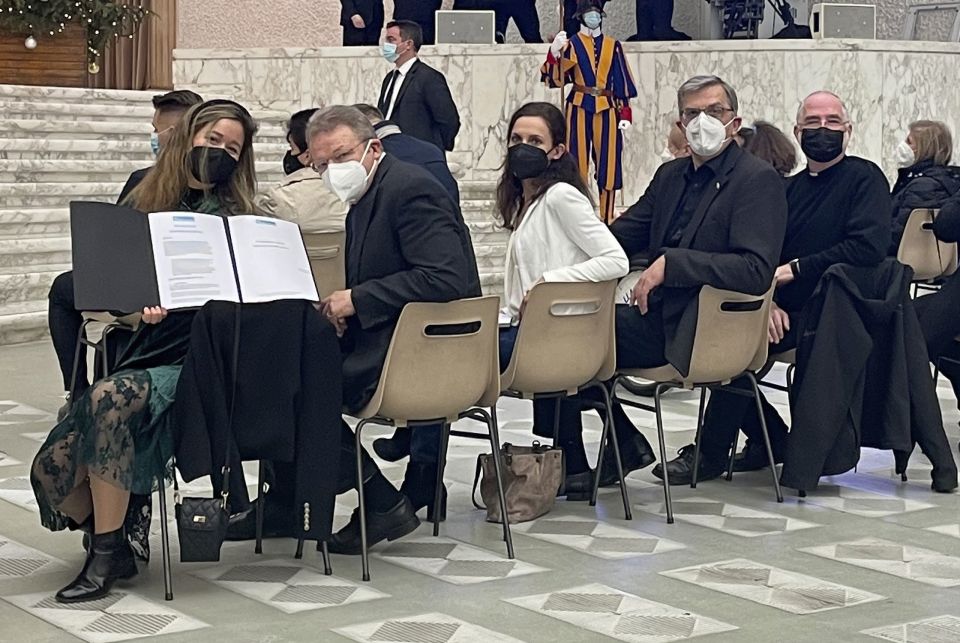 A group of pilgrims who presented a "Faith Manifesto" to Pope Francis are pictured during the pope's general audience at the Vatican Jan. 5, 2022. (CNS photo/courtesy Initiative Neuer Anfang)

Sexual abuse has cast a long shadow over the German Catholic Church in the past 12 years. Now, it is overshadowing the third Synodal Assembly, in which delegates face pressure to deliver immediate and tangible results.

Nearly 230 lay and religious delegates will meet in Frankfurt Feb. 3-5 for the third of five assemblies of the Synodal Path, organized to revitalize the church and restore trust following a September 2018 church-commissioned report that detailed thousands of cases of sexual abuse by Catholic clergy over six decades.

But since Jan. 20, the Catholic Church in Germany has been rocked by a church-commissioned law firm report on sexual abuse in the Archdiocese of Munich and Freising. The 1,900-page report said, among other things, that retired Pope Benedict VXI had mishandled four cases of clerical abuse when he was Munich archbishop.

And in mid-January, more than 100 Catholic Church employees — including priests, religious educators, doctors and nurses — publicly identified themselves as part of the LGBTQ community in a documentary broadcast at prime time on the main ARD channel of German television and repeated in regional channels. An online petition by #OutInChurch -- For a Church Without Fear has been signed by more than 86,000 people.

Irme Stetter-Karp, who as the new president of the Central Committee of German Catholics is a co-chair of the Synodal Path, said it is at a crossroads.

"We need clear votes for an end to the abuse of power — especially by bishops. Decisions should be made together with the grassroots of Catholics. And it is high time that those who are affected (victims) are involved," she said in a statement Jan. 21.

This was echoed in an open letter published Jan. 31 by the grassroots reform movement We Are Church and 25 other organizations and further endorsed by four victims support initiatives.

"In this dramatic situation, the Third Plenary Assembly of the Synodal Path can and must bring tangible and immediate change. Internationally, too, the hopes and expectations regarding the Synodal Path in Germany are great," said the open letter.

"The ordinary members of the church finally want to see the first deeds of reform, not hear any more promises of delay," the letter said.

At the Synodal Assembly, delegates expect to adopt the first binding resolutions on the reform texts. In addition, the contentious issue of women's ordination and the blessing of same-sex couples will be on the agenda in a first reading. These texts — discussed in small groups, or forums — include possible action on women in sacramental ministry.

If adopted, the action text "Involvement of the faithful in the appointment of the diocesan bishop," could be one of the first binding resolutions. It proposes that a gender-balanced body should be elected in each diocese to act as a "co-deciding body" with the cathedral chapter in a list of three bishop candidates to be sent to the Holy See.

At weekend Masses Jan. 29-30, Bishop Ulrich Neymeyr of Erfurt had a letter about the current tensions read aloud in parishes.

"Dear fellow Christians, in these days we are experiencing the profound crisis of our church with a new vigor: Once again, we are made aware of the suffering inflicted on people in the church through sexualized violence. Once again, we have to hear about the failure of those responsible, who did not punish priests whose crimes they knew about, while advocating a strict sexual morality.

He said the issue surrounding the retired pope "appalls many faithful, as does the rejection of the resignation of the bishops who have admitted their responsibility and asked to be relieved. I can understand that very well." He said the situation of some people feeling marginalized because of gender "needs to change."

He asked parishioners, many of whom stuck with the church in difficult circumstances under communism, to not abandon the church but to share in the journey forward in the Synodal Path where "proposals are being developed to address the systemic causes of what happened."

In mid-January, the Archdiocese of Berlin held a virtual session in which small groups reported back on their forum discussions.

Asked by a participant about his stance is on the ordination of women, Archbishop Heiner Koch answered, "You know that this question is controversial even in our diocese. The one person says, 'Here hinges the future of the church,' others say 'That's precisely what we do not want.'"

The Catholic Church teaches that women cannot be priests.

Archbishop Koch said he understands some women disagree, but he would not publicly oppose church teaching.

"I will keep an open mind to the question of the diaconate," he said, noting that "perhaps it would be a valve, an opening, that would at least for a certain time calm things down."

He also spoke of his fear of this issue splitting German Catholics.

"It is one of the biggest, maybe one of the biggest worries I have as a bishop — do we stay together, does it keep us together, or does such a decision lead to ... a bit of disunity and even division. That is the biggest fear I have. In this state of tension I also stand, and I can't get out of it, either."

Lay leaders also are split, although the majority of the delegates to the Synodal Assembly are expected to support women's ordination.

Dorothea Schmidt, a delegate to the Synodal Assembly, told Catholic News Service she is against the ordination of women and believes priests should stay celibate in order to concentrate on their calling. She is part of the New Beginning Initiative, which, in January, presented Pope Francis with a manifesto signed by 6,000 people. The document acknowledged the need for fundamental changes in the church but said the Synodal Path ignores the core of the crisis.

A new generation in Northern Ireland for peace