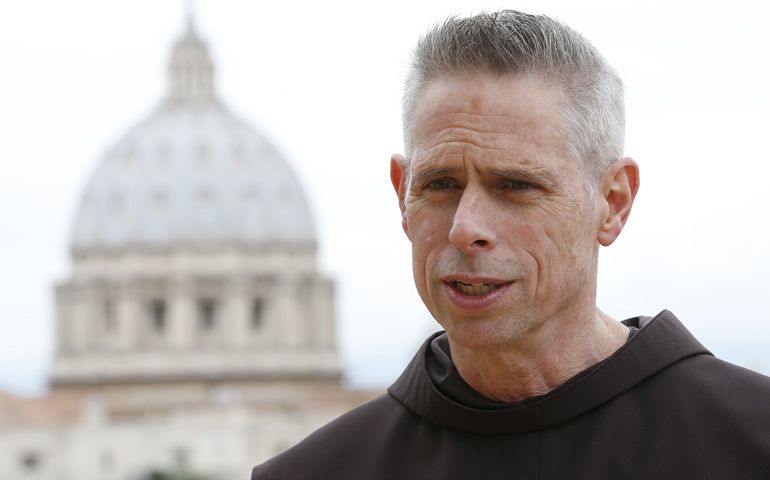 Rome — The leader of the main group of the world's Franciscans has written members of his order around the world informing them that their financial stability is at "grave risk" because of "questionable financial activities" undertaken by staffers of the order's Roman administrative offices.

Because of the questionable activities the order's general treasurer has resigned and ecclesiastical and civil authorities have been called upon for help, writes Franciscan Fr. Michael Perry, the minister general of the order.

"The General Curia finds itself in grave, and I underscore ‘grave’ financial difficulty, with a significant burden of debt," Perry, head of the Order of Friars Minor writes in a posting on the order's website.

"The systems of financial oversight and control for the management of the patrimony of the Order were either too weak or were compromised, thus limiting their effectiveness to guarantee responsible, transparent management," he continues.

"There appears to have taken place a number of questionable financial activities that were conducted by friars entrusted with the care of the patrimony of the Order without the full knowledge or consent of the former and current General Definitorium," states Perry, using the name the order uses for its governing council.

"These questionable activities also involve people who are not Franciscan but who appear to have played a central role," states Perry. "For these reasons, the General Definitorium, working in unanimity, has decided to call upon assistance from civil authorities to take up this matter."

The Order of Friars Minor is one of several orders that trace their roots directly to St. Francis of Assisi, the 13th century Italian saint known for his austerity. The order has some 15,000 friars around the world in more than 115 provinces. There are seven provinces in the United States.

Perry, an American, was elected to lead the order in May 2013 when the previous minister general was appointed by Pope Francis as secretary of the Vatican's congregation for religious life.

Perry's secretary at the order's Roman headquarters confirmed the authenticity of the letter in a brief phone call Friday, saying it had been sent to the order's global provinces "to inform them of the situation." The secretary said Perry was unavailable for immediate comment because he was in meetings at the Vatican.

Perry's letter, dated Dec. 17, begins by informing the friars that his administration started an internal inquiry process in Sept. 2014 to look into "the financial dealings of the Office of the General Treasurer."  The minister general then states that they sought advice "from a highly regarded group of lawyers" and that "competent ecclesiastical authorities also were informed of our concerns and have been updated on a regular basis."

In order "to help gain control over the financial dealings of the General Curia," writes Perry, the order's general treasurer resigned and also relinquished his duties as legal representative of the order.

Those three friars, Perry states, started a working group to "verify the current economic situation" of the order; "to examine and evaluate existing systems for financial oversight;" and "to examine the practices of the Office of the General Treasurer from 2003 until the present, with special attention to any activities that might be a cause for concern."

That investigation, Perry states, identified the "grave" financial status of the order and the "questionable financial activities" that had been undertaken.

Perry's letter does not specify which civil authorities had been contacted to investigate the situation. It also does not specify what the cause of the debts identified or what initiatives of the order such debt would jeopardize.

A brief review of documents available on the order's website did not reveal financial information such as the operating budget of its Rome headquarters. It is unknown as well what kind of property the office might own or manage.

In most religious orders, the financial accounts of the individual provinces of the order are held separate from one another and from the order's headquarters.

While Perry's letter does not name any of the Franciscan officials involved in the situation, their names are available in various previous postings on the order's website.

According to a Nov. 5 posting at the website, the new special delegate for economic affairs is Franciscan Fr. Pasquale del Pezzo. That posting states that del Pezzo's role is to include providing "valid and appropriate suggestions" to Perry so that the order "might adopt a new system of administration and management."

Perry's predecessor as minister general is José Rodríguez Carballo, now an archbishop and secretary of the Vatican's Congregation for Institutes of Consecrated Life and Societies of Apostolic Life. He had led the Franciscan order from 2003 until his Vatican appointment in April 2013.

Perry had been serving as the order's second-in-command prior to his election as minister general. Prior to that, he had served as an advisor to the U.S. bishops' conference and had worked for a decade for Franciscan programs in the Democratic Republic of the Congo.

Perry ends his Dec. 17 letter by pledging to his friars that he and his council "will make every effort to ensure just, transparent and ethical oversight of the financial dealings of the General Curia."

"We also will make serious efforts to address directly the grave financial situation in which we find ourselves," he states.

Saying he realizes that many friars "will be seriously disappointed and discouraged by this situation," Perry says he hopes to provide more information soon and will give "a full account of the whole affair" at the order's next worldwide meeting of its members, to be held in Assisi, Italy, in May-June 2015.

First U.S. clergy fatality from COVID-19 a deacon in Washington