by Jamie Manson
Accountability
Opinion
This article appears in the World Meeting of Families 2018 feature series. View the full series. 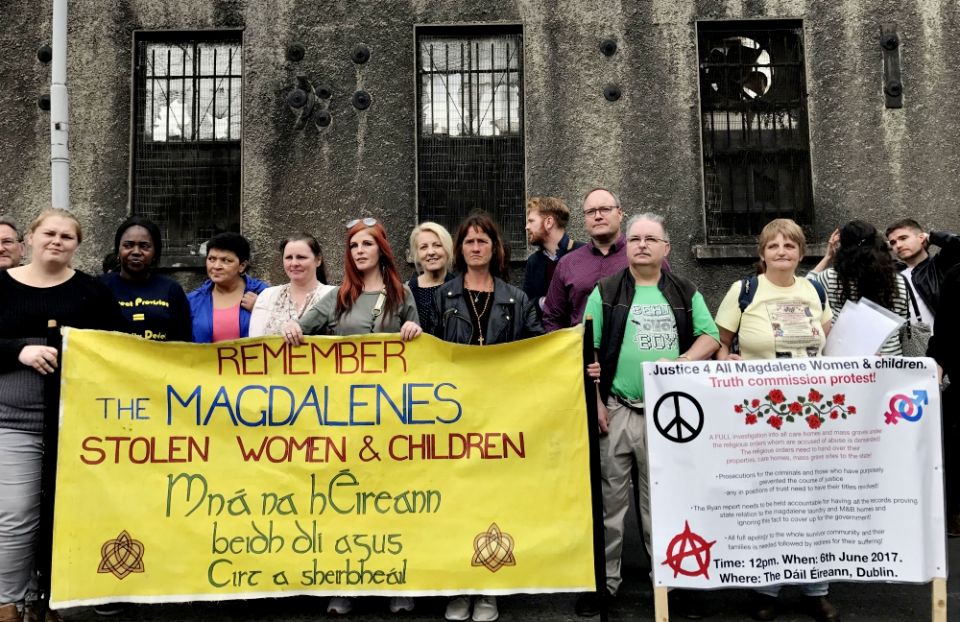 Survivors and their supporters demonstrate on Aug. 25, 2017, at a near-derelict former Magdalene laundry in Dublin, where they called on the Irish government to live up to commitments on redress and a memorial for survivors of the laundries. (Newscom/ZUMA Press/Ed Carty)

For U.S. Catholics, these days undoubtedly feel like 2002 all over again, when an unrelenting, violent torrent of revelations about clergy sex abuse and cover-up in Boston threatened to suffocate the faithful with details both disgusting and disillusioning.

Perhaps the only other country to be as engulfed in dark disclosures about clergy sex abuse is Ireland. As NCR reported in late July, Irish survivors of sex abuse say they are owed an apology for the decades of abuse at the hands of priests. The survivors are insisting that Pope Francis admit to the Vatican's role in covering up these cases when he visits Dublin later this month for the World Meeting of Families.

I hope and pray that survivors will receive what is due to them by the pope and the Irish hierarchy. But if Francis is going to make an act of contrition, he should also offer a confession of sin against the Irish young women and babies who were held captive in the Magdalene laundries, which operated in Ireland for nearly a century.

For those unfamiliar with the Magdalene laundries, they were a system of institutions run by congregations of Catholic nuns for profit. Young women who got pregnant out of wedlock or as the result of sexual abuse were put to work in these laundries as a way to atone for their sins.

While they labored, the nuns cared for their babies. Few women ever got to keep their children. In many cases, the sisters put them up for illegal adoptions against their mothers' will and refused to provide information on their whereabouts, an experience painfully chronicled in the 2013 film "Philomena."

"Magdalene asylums" originated in the late 19th century as charitable Christian institutions to support those considered to be "fallen women." They could be found in Canada, England and even the U.S. But in no country did they proliferate more than in Ireland, perhaps the result of the island's toxic blend of Irish sexual repression and Catholic taboo morality. The last laundry closed in 1996.

Many survivors of these laundries still find the experience too painful to speak of, but those who do speak out recount stories of long hours of hard labor in poor conditions with little or no pay, poor nutrition, physical attacks, limited medical attention and no education.

If the preoccupation with the sexual nature of these women's sins hadn't been made so obvious, one might get the sense that these women had reproduced asexually, since no accountability seemed to be required of the men who had impregnated them.

Some of the institutions did not have mirrors or calendars. Many survivors of the laundries say they did not know who they were when they finally got free.

Sadly, children in other Catholic-run institutions did not fare much better than the women in Magdalene laundries. A particularly horrific case of child abuse came to light just last year, thanks to the extraordinary amateur detective work of Catherine Corless, a resident in a rural town called Tuam (pronounced "Chewm") in County Galway.

Corless recalled as a girl a strange subset of students in her school known as "home babies." Pale, thin and sickly, these children lived in the local Mother and Baby Home (another institution for unmarried mothers and their children), run by the Sisters of Bon Secours. The home was surrounded by high concrete walls studded with shards of glass at the top, a makeshift form of barbed wire. The children were picked on mercilessly by their classmates and ignored by their teachers in the classroom.

Even baptism could not cleanse these children of their true original sin — that is, the manner in which they were conceived.

"They were the children of the Devil," Kevin O'Dywer recalled in Dan Barry's stunning account of the atrocities at Tuam in The New York Times. "We learned this in school."

Though the home was closed in 1961, over the years strange sightings of human remains were reported. Corless became convinced they were the bones of home babies.

For years, she faced the doubt and even derision of her neighbors and the silence of the clergy and politicians. But in 2017, Corless' obsessive drive to find the truth paid off. A government-ordered excavation of the grounds of the Bon Secours Mother and Baby Home found an underground septic tank filled with "significant quantities of human remains."

Analysis of selected remains found that the deceased ranged in age from 35 weeks to 3 years old, most of them buried in the 1950s. Government records from that period suggest that many of the babies died of diseases that are the result of neglect and undernourishment: gastroenteritis, meningitis, influenza, tuberculosis.

Corless' research estimates that nearly 800 babies could have been buried by the nuns in 17 of the 20 chambers of the unconsecrated ground of that septic tank. 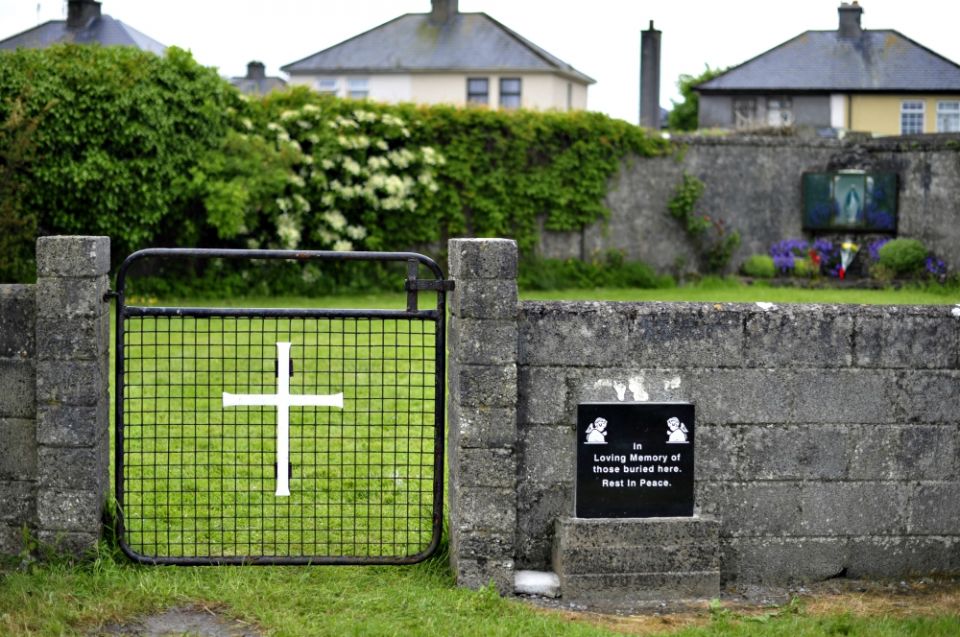 The entrance to the former Mother and Baby Home in Tuam, County Galway, Ireland (CNS/EPA/Aidan Crawley)

The revelations of the treatment of these babies and their mothers at Tuam can be linked to the hierarchy's glaring lack of credibility among the Irish people during the campaign to repeal Ireland's constitutional ban on abortion. During the months of debate that preceded the vote, many Catholic leaders chose to remain silent, presumably to avoid accusations of hypocrisy at any claim to revere all children.

Young women and their children faced physical and emotional violence at the hands of the church tantamount to those victimized by sexual abuse. All of these victims and survivors also deserve a perfect act of contrition by the pope, the hierarchy, the clergy and women religious.

Though the nuns ran the laundries as contractors for the state, the creation of these institutions was based on punitive doctrines, developed solely by men, that criminalized women's sexual desire.

The proof of the power of this sanctioned bias toward women can even be gleaned in the laundries' appellation. It was not an accident that the laundries were named after Mary Magdalene, one of Jesus' most exceptional disciples, whose reputation was later sullied by male tradition-makers who very successfully perpetuated a myth that she was a wanton, but later repentant, whore.

Though there has been little apology as of yet from the church for the treatment of women and children in the Magdalene laundries, government leaders have begun their atonement.

In a March 2017 speech about the horrors at Tuam, then-Prime Minister Enda Kenny, in a voice both passionate and trembling, reminded Parliament that Irish society bore as much blame as women religious, saying, "No nuns broke into our homes to kidnap our children."

Instead, "we gave them up to what we convinced ourselves was the nuns' care," he said. "We gave them up maybe to spare them the savagery of gossip, the wink and the elbow language of delight in which the holier-than-thous were particularly fluent."

"As a society in the so-called 'good old days,' we did not just hide away the dead bodies of tiny human beings, we dug deep and deeper still to bury our compassion, our mercy and our humanity itself," Kenny said.

The Irish people are reckoning with the sins of their past. Now, can the church?

Column | When in Dublin, Francis should apologize for Magdalene laundries, too

Irish bishop resigns after criticism of his treatment of abusive priest