I question whether systems can be forgiven 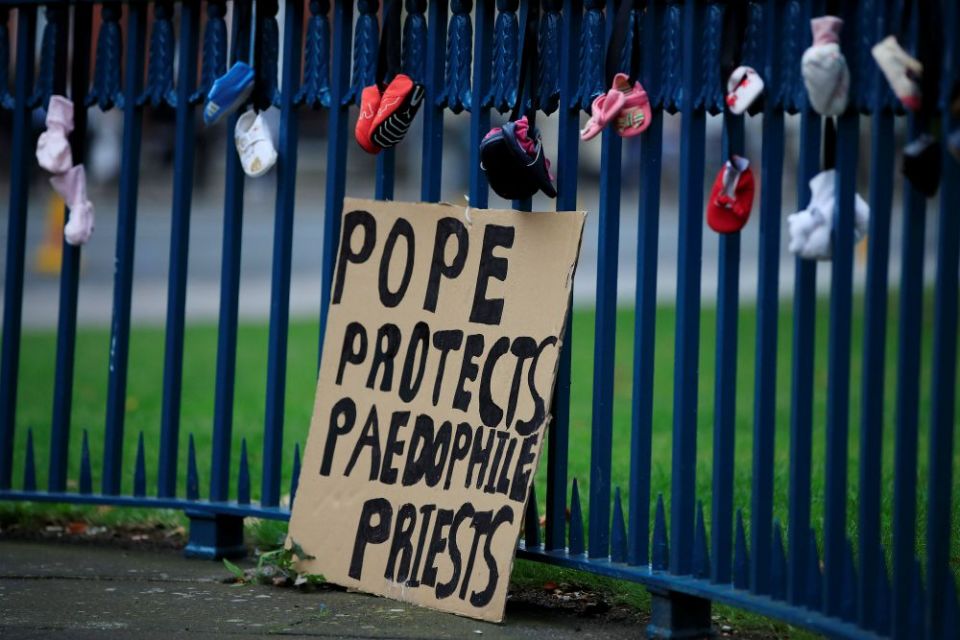 Baby shoes hang on a fence near a placard Aug 26 as a part of a protest to highlight child abuse during the visit of Pope Francis in Dublin. Before celebrating Mass in a Dublin park that day, Pope Francis solemnly asked forgiveness for the thousands of cases of sexual and physical abuse perpetrated by Catholics in Ireland. (CNS/Reuters/Gonzalo Fuentes, Reuters)

In 2015, after a white supremacist massacred nine worshipers after bible study at Emanuel AME Church in Charleston, South Carolina, the concepts of forgiveness and repentance were at the top of my mind. Seeing it as their duty to imitate Christ or as their pathway to peace, some survivors offered forgiveness to the remorseless murderer. Meanwhile, I considered their offer a premature act of grace the shooter did not deserve and that the survivors were not bound to give because the shooter had not asked for it.

As I wrote then, both Jesus and John the Baptist before him "expressed forgiveness as mandatory but conditional." The perpetrator had to ask for forgiveness first. Forgiveness was the reward for repentance.

A few years later, I find myself revisiting the concepts of forgiveness and repentance as they apply to the Catholic Church.

I live in Pennsylvania. I have not read the grand jury report. I don't want to. (I don't even like reading about rape or abuse of adults or children in fiction; a 884-page court document would be too much.) I've read excerpts from it in news stories. I've heard details of it in news broadcasts that warned listeners before the story that what they were about to hear was graphic and involved the abuse of children. I've heard people who survived sexual abuse at the hands of Catholic clergy share some of their experiences, their continued struggles and their fight for justice.

And, of course, I read the plea for forgiveness with which Pope Francis began Mass in Ireland on August 27.

He's asked. Survivors of abuse or those who are closely connected with them should forgive. Even if forgiveness isn't easy, it's that simple, right?

The thing is — like the Charleston massacre, last year's white nationalist rally in Charlottesville, or the separation of children from their parents and guardians at the U.S./Mexico border — the Pennsylvania grand jury report is just a symptom of something systemic. And symptoms keep coming back until you kill the disease. The Boston Globe's exposé on sex abuse 16 years ago was a symptom, too.

Can you forgive a system? And if you can, are you obligated to? A system can never ask forgiveness, and the systems at work here — white supremacy, clericalism, sexism, legislative systems supported by aggressive lobbying — were created long ago (centuries ago in some cases) by people who can never beg forgiveness from people they continue to affect and who, if given the chance in some sci-fi time-warp-type of fantasy, probably wouldn't. They left us with systems they built to benefit themselves, to ensure their power and prevent anyone unlike them from gaining it.

Perhaps they didn't foresee young and old worshipers gunned down in their church, mass shootings becoming practically a daily occurrence in the U.S., bodies flying as a driver mowed down anti-racist protestors, or thousands of children being victimized in a single state. Nonetheless, if they could see these results and more, my bet is that they would consider the people affected as casualties in the need to sustain the dominance of men, white men, white men with money, white men with guns, white men with guns and money, and to hold those populations in positions so adored that people we would never suspect often continue to aspire to them, sometimes without even realizing it.

The questions for me become now: Whom do leaders in these systems today consider casualties? Who is worth discarding? And when people who continue to benefit from these systems — and those people could be clergy, political leaders, lay people and everyday people — realize how lowly they've regarded everyone else, are they ready to repent, not just ask forgiveness?

Column | I question whether systems can be forgiven