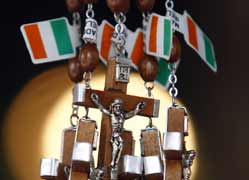 DUBLIN -- The inaugural meeting of a new association to represent the views of Irish priests drew six times more participants than organizers expected.

More than 300 priests were present at the first meeting of the Association of Catholic Priests in Port Laoise Sept. 15. Organizers had expected only 60 priests to attend, so the meeting was delayed while proceedings were transferred to a larger meeting hall.

One of the founders of the new association, Father Brendan Hoban, said the new association does not seek to represent all priests, only those who agree to its program, which was published in the September edition of the theological magazine The Furrow.

"The association hopes to speak to the members of the Vatican's apostolic visitation to Ireland to voice our opposition to the new English-language translation of the Mass," Father Hoban told Catholic News Service. "We believe the new translation, which is to come into effect next year, is over-complicated and over-Latinized. There has been very little consultation about it, but nobody seems to want it -- it's another example of the church trying to fix things that don't need to be fixed and not fixing the things that need fixing."

The association said it also would work for "full implementation of the vision and teaching of the Second Vatican Council, with special emphasis on: the primacy of the individual conscience, the status and active participation of all the baptized and the task of establishing a church where all believers will be treated as equal; a restructuring of the governing system of the church ... encouraging a culture of consultation and transparency, particularly in the appointment of church leaders; a re-evaluation of Catholic sexual teaching and practice that recognizes the profound mystery of human sexuality."

This is the third body to have been established to represent Irish priests since the 1960s. The Association of Irish Priests fell into disuse in the early 1970s and the Irish bishops instituted the National Conference of Priests of Ireland, with elected representatives, in 1975, but it ceased operations in 2007.

The Association of Catholic Priests hopes for greater success than the National Conference of Priests of Ireland, which was often ignored by the hierarchy. When one conference president tried contacting the papal nuncio to Ireland, he was informed that he was "a nobody leading nobodies."

Truth and a call to renewal