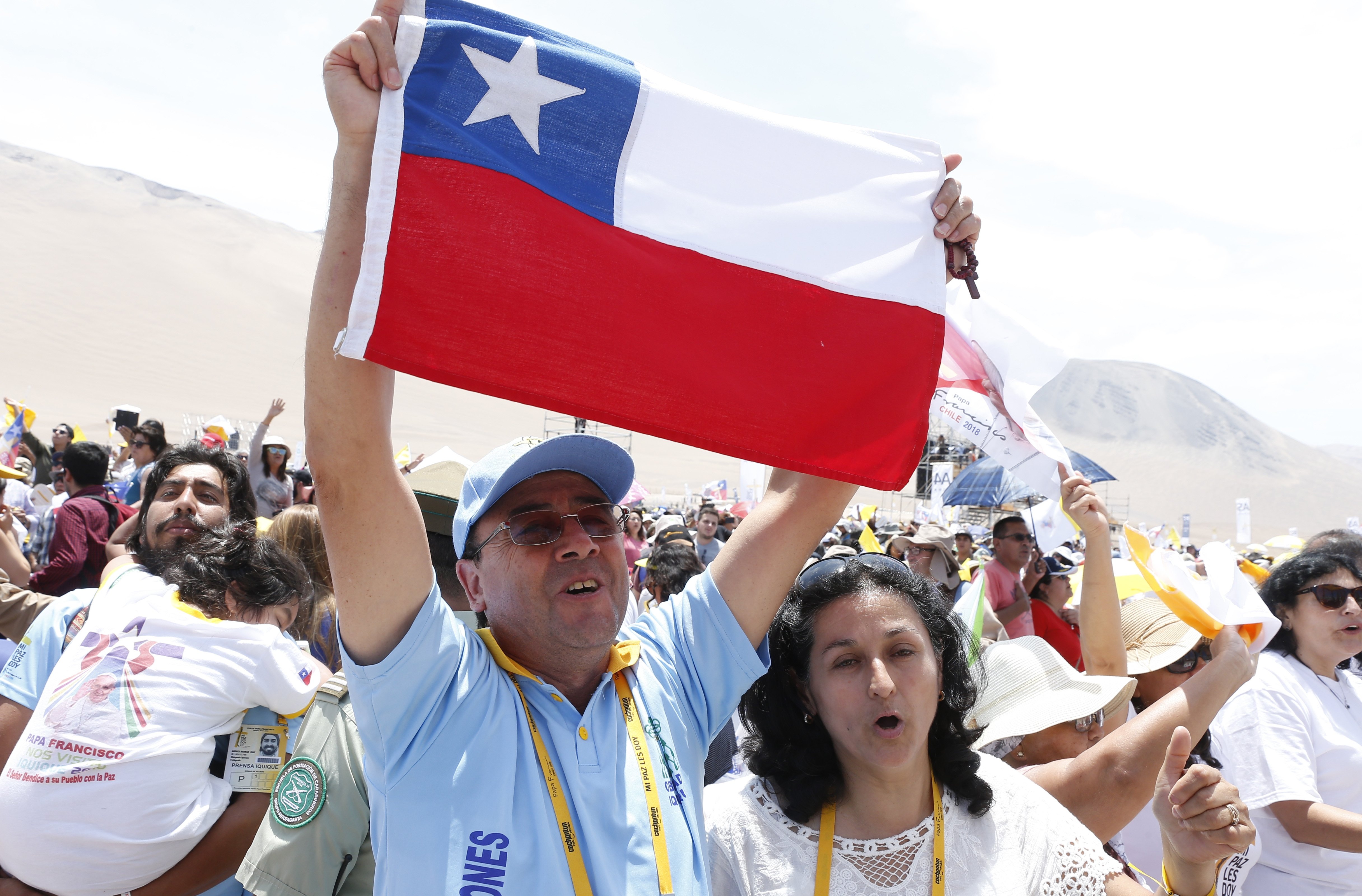 A man holds Chile's flag as people celebrate after attending Pope Francis' celebration of Mass at Lobito beach in Iquique, Chile, in this Jan. 18, 2018, file photo. The pope sent a letter to all dioceses in Chile commemorating the 500th anniversary of the first Mass celebrated in the territory. (CNS photo/Paul Haring)

MEXICO CITY — The Society of Jesus has suspended a prominent Chilean priest as it investigates accusations with a "sexual connotation," according to the Jesuits.

In a statement May 3, the Jesuit province in Chile said, "a complaint was received April 29 from an adult woman against Jesuit Father Felipe Berríos for acts of sexual connotation. Such events would have occurred when the complainant was a minor."

The accusations against Father Berríos shocked Chile, where the Jesuit has become a voice for the poor and excluded, including many migrants suffering discrimination. Father Berríos lived in a migrant camp in the northern Chilean city of Antofagasta since 2015, after returning from missionary work in Africa with Jesuit Refugee Service.

The statement said the provincial in Chile, Jesuit Father Gabriel Roblero, ordered the opening of a preliminary canonical investigation May 2 and named a lay lawyer to lead the investigation.

"The Company of Jesus will have all the necessary means so that this investigation is carried out with the greatest rigor and speed, in order to clarify the reported facts and possible responsibilities," the statement said.

"While the canonical investigation is being completed, the provincial has ordered the suspension of the public exercise of Felipe Berríos' priestly ministry."

Father Berríos has founded a pair of nongovernmental organizations, been the chaplain for groups in Chile and was asked to be coordinator of informal housing developments in the housing ministry by Chilean President Gabriel Boric. Father Berríos declined the offer.

"I have not been informed of anything other than what was said in the statement," Father Berríos said. "I will do whatever it takes to understand and clarify the origins of this complaint and I have put myself, from now on, at the disposal of the Company to clarify the facts as quickly as possible."

The accusation against Father Berríos come as the Catholic Church in Chile suffers the fallout of its mishandling of accusations of clerical sexual abuse. All of Chile's bishops offered their resignations in 2018 after attending an emergency summit at the Vatican on the sexual abuse crisis.