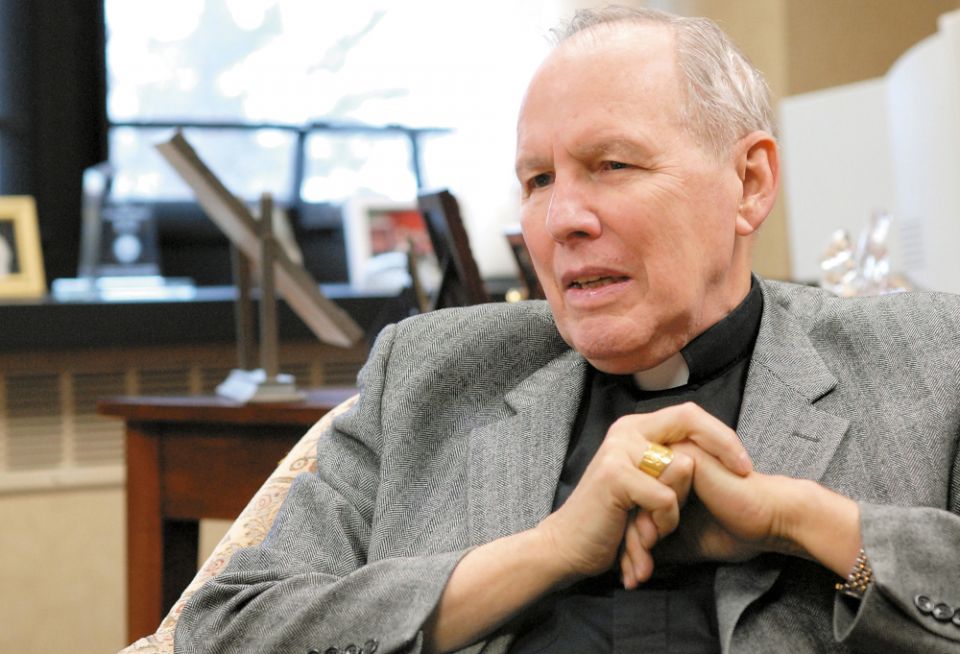 Now-retired Bishop Matthew Clark of Rochester, N.Y., is pictured in an Jan. 16, 2008, photo when he headed the diocese. A federal bankruptcy judge ruled Feb. 11, 2020, that with specific limitations, an attorney for sexual abuse victims may question Clark under oath about his knowledge of sexual abuse during his years as bishop of Rochester, from 1979 to 2012. The ruling was issued during a hearing in the diocese's Chapter 11 bankruptcy case. (CNS/Catholic Courier)

Rochester, N.Y. — A federal bankruptcy judge has ruled that – with specific limitations – an attorney for victims of sexual abuse may question retired Bishop Matthew Clark of Rochester under oath about his knowledge of sexual abuse during his years as head of the diocese.

The ruling was issued during a Feb. 11 hearing in the diocese's Chapter 11 bankruptcy case.

In January, victims' attorneys had filed a motion requesting the right to interrogate the 82-year-old prelate about the extent of his knowledge of abuse taking place during his 33-year tenure as Rochester's Catholic bishop, which concluded with his retirement in 2012.

Clark's attorney, Mary Jo Korona, argued during the hearing in U.S. Bankruptcy Court that the bishop is not competent to give a deposition, having been diagnosed with early stage Alzheimer's disease in July 2019. The bishop made his diagnosis public approximately one month later.

U.S. Bankruptcy Judge Paul Warren ruled Clark could be questioned by an attorney representing the unsecured creditors' committee in the bankruptcy case.

Acknowledging the possibility that the bishop's medical condition could cause him to become forgetful or confused, Warren said the deposition must take place within 30 days of his ruling; be conducted in a single day; last no more than three hours and include breaks; and take place with only one attorney each representing the diocese and the unsecured creditors' committee, plus Clark's attorney. No attorneys representing insurers are allowed to take part.

Warren also said Clark may bring with him a medical authority who would have the right to ask for questioning to cease if the bishop were to become overwhelmed by the process. Although he stipulated that a transcript would eventually become available to the public, Warren said no audio or video recording of the deposition would be permitted.

In addition, Warren ruled that Clark must produce any personal written information still in his possession – diaries, letters, etc. – that might contain information related to clergy sexual abuse.

Warren established Aug. 13, 2020, as the final date for victims to file claims against the diocese in the bankruptcy case. That date also will mark the conclusion of a one-year window established by New York state's Child Victims Act for the filing of sexual abuse claims that previously were barred by statutes of limitations.

He also approved a "proof of claim" form those wishing to make victim claims will be required to submit to the bankruptcy court. Attorneys representing the diocese, insurance companies and the unsecured creditors' committee had discussed drafts of the form during the Feb. 11 hearing.

When the Rochester Diocese filed for Chapter 11 protection Sept. 12, 2019, Bishop Salvatore Matano explained that the diocese would be financially unable to satisfy all the claims filed against it.

Rochester was the first diocese or archdiocese in New York to file for bankruptcy. However, in its annual financial report released in late January 2020, the Diocese of Buffalo, New York, noted that "a filing of a voluntary petition for reorganization under Chapter 11 of the Federal Bankruptcy Code is imminent."